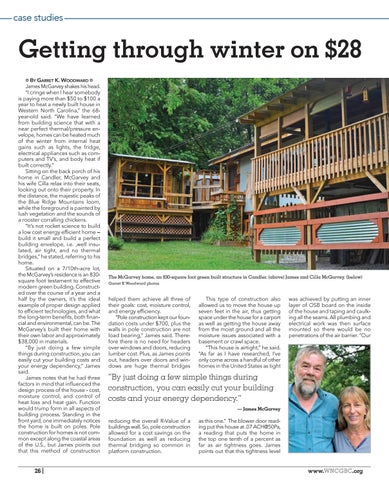 Getting through winter on $28 p BY GARRET K. WOODWARD p James McGarvey shakes his head. “I cringe when I hear somebody is paying more than $50 to $100 a year to heat a newly built house in Western North Carolina,” the 68year-old said. “We have learned from building science that with a near perfect thermal/pressure envelope, homes can be heated much of the winter from internal heat gains such as lights, the fridge, electrical appliances such as computers and TV’s, and body heat if built correctly.” Sitting on the back porch of his home in Candler, McGarvey and his wife Cilla relax into their seats, looking out onto their property. In the distance, the majestic peaks of the Blue Ridge Mountains loom, while the foreground is painted by lush vegetation and the sounds of a rooster corralling chickens. “It’s not rocket science to build a low cost energy efficient home — build it small and build a perfect building envelope, i.e. ,well insulated, air tight, and no thermal bridges,” he stated, referring to his home. Situated on a 7/10th-acre lot, the McGarvey’s residence is an 830square foot testament to effective modern green building. Constructed over the course of a year and a half by the owners, it’s the ideal example of proper design applied to efficient technologies, and what the long-term benefits, both financial and environmental, can be. The McGarvey’s built their home with their own labor and approximately $38,000 in materials. “By just doing a few simple things during construction, you can easily cut your building costs and your energy dependency,” James said. James notes that he had three factors in mind that influenced the design process of the house – cost, moisture control, and control of heat loss and heat gain. Function would trump form in all aspects of building process. Standing in the front yard, one immediately notices the home is built on poles. Pole construction for homes is not common except along the coastal areas of the U.S., but James points out that this method of construction

helped them achieve all three of their goals: cost, moisture control, and energy efficiency. “Pole construction kept our foundation costs under $700, plus the walls in pole construction are not load bearing,” James said. Therefore there is no need for headers over windows and doors, reducing lumber cost. Plus, as James points out, headers over doors and windows are huge thermal bridges

This type of construction also allowed us to move the house up seven feet in the air, thus getting space under the house for a carport as well as getting the house away from the moist ground and all the moisture issues associated with a basement or crawl space. “This house is airtight,” he said. “As far as I have researched, I’ve only come across a handful of other homes in the United States as tight

was achieved by putting an inner layer of OSB board on the inside of the house and taping and caulking all the seams. All plumbing and electrical work was then surface mounted so there would be no penetrations of the air barrier. “Our

“By just doing a few simple things during construction, you can easily cut your building costs and your energy dependency.” — James McGarvey

reducing the overall R-Value of a buildings wall. So, pole construction allowed for a cost savings on the foundation as well as reducing thermal bridging so common in platform construction.

as this one.” The blower door reading put this house at .07 ACH@50Pa, a reading that puts the home in the top one tenth of a percent as far as air tightness goes. James points out that this tightness level