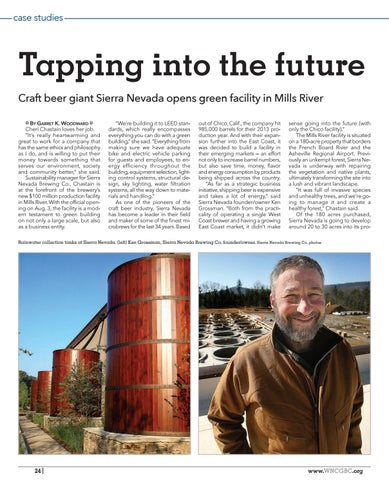 Tapping into the future Craft beer giant Sierra Nevada opens green facility in Mills River p BY GARRET K. WOODWARD p Cheri Chastain loves her job. “It’s really heartwarming and great to work for a company that has the same ethics and philosophy as I do, and is willing to put their money towards something that serves our environment, society and community better,” she said. Sustainability manager for Sierra Nevada Brewing Co., Chastain is at the forefront of the brewery’s new $100 million production facility in Mills River. With the official opening on Aug. 3, the facility is a modern testament to green building on not only a large scale, but also as a business entity.

“We’re building it to LEED standards, which really encompasses everything you can do with a green building,” she said. “Everything from making sure we have adequate bike and electric vehicle parking for guests and employees, to energy efficiency throughout the building, equipment selection, lighting control systems, structural design, sky lighting, water filtration systems, all the way down to materials and handling.” As one of the pioneers of the craft beer industry, Sierra Nevada has become a leader in their field and maker of some of the finest microbrews for the last 34 years. Based

out of Chico, Calif., the company hit 985,000 barrels for their 2013 production year. And with their expansion further into the East Coast, it was decided to build a facility in their emerging markets — an effort not only to increase barrel numbers, but also save time, money, flavor and energy consumption by products being shipped across the country. “As far as a strategic business initiative, shipping beer is expensive and takes a lot of energy,” said Sierra Nevada founder/owner Ken Grossman. “Both from the practicality of operating a single West Coast brewer and having a growing East Coast market, it didn’t make

sense going into the future (with only the Chico facility).” The Mills River facility is situated on a 180-acre property that borders the French Board River and the Asheville Regional Airport. Previously an unkempt forest, Sierra Nevada is underway with repairing the vegetation and native plants, ultimately transforming the site into a lush and vibrant landscape. “It was full of invasive species and unhealthy trees, and we’re going to manage it and create a healthy forest,” Chastain said. Of the 180 acres purchased, Sierra Nevada is going to develop around 20 to 30 acres into its pro-