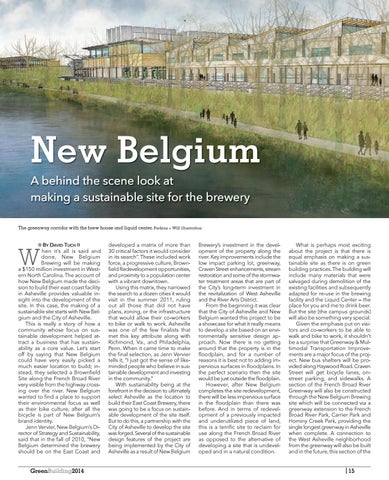 New Belgium A behind the scene look at making a sustainable site for the brewery The greenway corridor with the brew house and liquid center. Perkins + Will illustration

BY DAVID TUCH p hen it’s all is said and done, New Belgium Brewing will be making a $150 million investment in Western North Carolina. The account of how New Belgium made the decision to build their east coast facility in Asheville provides valuable insight into the development of the site. In this case, the making of a sustainable site starts with New Belgium and the City of Asheville. This is really a story of how a community whose focus on sustainable development helped attract a business that has sustainability as a core value. Let’s start off by saying that New Belgium could have very easily picked a much easier location to build; instead, they selected a Brownfield Site along the French Broad River very visible from the highway crossing over the river. New Belgium wanted to find a place to support their environmental focus as well as their bike culture, after all the bicycle is part of New Belgium’s brand identity. Jenn Vervier, New Belgium’s Director of Strategy and Sustainability, said that in the fall of 2010, “New Belgium determined the brewery should be on the East Coast and p

developed a matrix of more than 30 critical factors it would consider in its search”. These included work force, a progressive culture, Brownfield Redevelopment opportunities, and proximity to a population center with a vibrant downtown. Using this matrix, they narrowed the search to a dozen cities it would visit in the summer 2011, ruling out all those that did not have plans, zoning, or the infrastructure that would allow their co-workers to bike or walk to work. Asheville was one of the few finalists that met this key attribute along with Richmond, Va., and Philadelphia, Penn. When it came time to make the final selection, as Jenn Vervier tells it, “I just got the sense of likeminded people who believe in sustainable development and investing in the community.” With sustainability being at the forefront in the decision to ultimately select Asheville as the location to build their East Coast Brewery, there was going to be a focus on sustainable development of the site itself. But to do this, a partnership with the City of Asheville to develop the site was forged. Several of the sustainable design features of the project are being implemented by the City of Asheville as a result of New Belgium

Brewery’s investment in the development of the property along the river. Key improvements include the low impact parking lot, greenway, Craven Street enhancements, stream restoration and some of the stormwater treatment areas that are part of the City’s long-term investment in the revitalization of West Asheville and the River Arts District. From the beginning it was clear that the City of Asheville and New Belgium wanted this project to be a showcase for what it really means to develop a site based on an environmentally sensitive design approach. Now there is no getting around that the property is in the floodplain, and for a number of reasons it is best not to adding impervious surfaces in floodplains. In the perfect scenario then the site would be just outside the floodplain. However, after New Belgium completes the site redevelopment, there will be less impervious surface in the floodplain than there was before. And in terms of redevelopment of a previously impacted and underutilized piece of land, this is a terrific site to reclaim for use along the French Broad River as opposed to the alternative of developing a site that is undeveloped and in a natural condition.

What is perhaps most exciting about the project is that there is equal emphasis on making a sustainable site as there is on green building practices. The building will include many materials that were salvaged during demolition of the existing facilities and subsequently adapted for re-use in the brewing facility and the Liquid Center — the place for you and me to drink beer. But the site (the campus grounds) will also be something very special. Given the emphasis put on visitors and co-workers to be able to walk and bike to work, it shouldn’t be a surprise that Greenway & Multimodal Transportation Improvements are a major focus of the project. New bus shelters will be provided along Haywood Road. Craven Street will get bicycle lanes, onstreet parking, and sidewalks. A section of the French Broad River Greenway will also be constructed through the New Belgium Brewing site which will be connected via a greenway extension to the French Broad River Park, Carrier Park and Hominy Creek Park, providing the single longest greenway in Asheville when complete. A connection to the West Asheville neighborhood from the greenway will also be built and in the future, this section of the