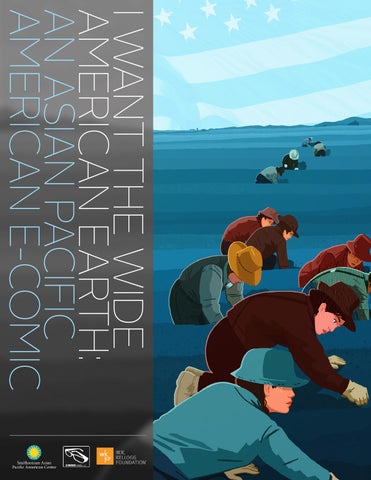 I Want the Wide American Earth:

I Want the Wide American Earth exhibition on display at the National Museum of American History, 2013.

Chris Danger is an editorial/children’s book illustrator originally from Hawaii. He graduated from the School of

Keith Chow is the Education and Outreach Director for SIUniverse Media and an editor on Secret Identities and Shattered and is the founder/editor of The Nerds of Color. He also works as an education consultant and co-hosts the Web-based talk show The Joy Dunk Club for Asian Cinevision. He lives in Maryland. www.thenerdsofcolor.org @the_real_chow

Visual Arts in New York City in 2010, and has worked as an animator, working for many clients including

Since graduating from Cornell University in 2007, Ming Doyle has been featured in such diverse collections as IDW’s “Womanthology” series, Vertigo’s “Mystery in Space,” Marvel’s “Fantastic Four #600” and “Girl Comics,” and Image’s “Popgun Vol.2” and “Comic Book Tattoo.” Her weekly tragi-comedic sitcom style webcomic, “The Loneliest Astronauts,” written by Kevin 16

Bernard Chang is an Asian-American artist/ designer, best known for his work in the comic book industry and entertainment design. Some of his most popular illustrated work includes Wonder Woman, Superman, and Supergirl. He currently draws “Green Lantern Corps” for DC Comics. Bernard graduated from Pratt Institute in Brooklyn, NY with a bachelor’s in architecture and was captain of the men’s basketball team. www.bernardchang.com @thebernardchang

Church, wrapped up in 2011 after two years, while her first miniseries “Mara,” written by Brian Wood and published by Image Comics, began on the last Wednesday of 2012. She currently resides in the Boston area with her boyfriend, one Siamese cat, and an ever growing collection of vintage Halloween masks. www.mingdoyle.com @mingdoyle

Yasmin Liang is a Hong Kong-born illustrator and comic book artist. She attended Parsons the New School for Design and graduated with a BFA in Illustration. yazmeanie.com @yasminliang

Krishna Sadasivam creates custom comics and illustrations for organizations, magazines and companies. A champion of comics advocacy, Krishna speaks, blogs, and writes articles on the important role of comics in both education and brand awareness. His clients have included Microsoft, Mashable, Other World Computing and EE Times. His work has been featured on many notable websites, including TechCrunch, Gizmodo and CNET.

Brooklyn cartoonist/illustrator GB Tran’s graphic memoir VIETNAMERICA details his family’s survival through the Vietnam War and US immigration. Selected by TIME as an all-time “Top 10 Graphic Memoir”, it also earned a New York Foundation for the Arts fellowship in nonfiction literature and gold medal from the Society of Illustrators. His next big project is raising his daughter. www.gbtran.com @vietnamerica