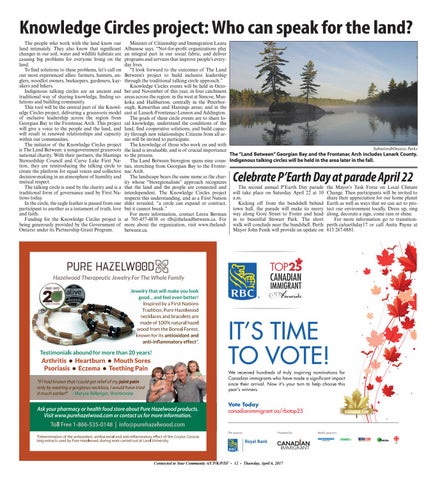 Knowledge Circles project: Who can speak for the land? The people who work with the land know our land intimately. They also know that significant changes in our soil, water and wildlife habitats are causing big problems for everyone living on the land. To find solutions to these problems, let’s call on our most experienced allies: farmers, hunters, anglers, woodlot owners, beekeepers, gardeners, kayakers and hikers. Indigenous talking circles are an ancient and traditional way of sharing knowledge, finding solutions and building community. This tool will be the central part of the Knowledge Circles project, delivering a grassroots model of inclusive leadership across the region from Georgian Bay to the Frontenac Arch. This project will give a voice to the people and the land, and will result in renewed relationships and capacity within our communities. The initiator of the Knowledge Circles project is The Land Between: a nongovernment grassroots national charity. With their partners, the Hastings Stewardship Council and Curve Lake First Nation, they are reintroducing the talking circle to create the platform for equal voices and collective decision-making in an atmosphere of humility and mutual respect. The talking circle is used by the charity and is a traditional form of governance used by First Nations today. In the circle, the eagle feather is passed from one participant to another as a testament of truth, love and faith. Funding for the Knowledge Circles project is being generously provided by the Government of Ontario under its Partnership Grant Program.

Minister of Citizenship and Immigration Laura Albanese says, “Not-for-profit organizations play an integral part in our social fabric, and deliver programs and services that improve people’s everyday lives. “I look forward to the outcomes of The Land Between’s project to build inclusive leadership through the traditional talking circle approach.” Knowledge Circles events will be held in October and November of this year, in four catchment areas across the region: in the west at Simcoe, Muskoka and Haliburton; centrally in the Peterborough, Kawarthas and Hastings areas; and in the east at Lanark-Frontenac-Lennox and Addington. The goals of these circle events are to share local knowledge, understand the conditions of the land, find cooperative solutions, and build capacity through new relationships. Citizens from all areas will be invited to participate. The knowledge of those who work on and with Submitted/Ontario Parks the land is invaluable, and is of crucial importance The “Land Between” Georgian Bay and the Frontanac Arch includes Lanark County. to the process. The Land Between bioregion spans nine coun- Indigenous talking circles will be held in the area later in the fall. ties, stretching from Georgian Bay to the Frontenac Arch. The landscape bears the same name as the charity whose “bioregionalism” approach recognizes The second annual P’Earth Day parade the Mayor’s Task Force on Local Climate that the land and the people are connected and interdependent. The Knowledge Circles project will take place on Saturday April 22 at 10 Change. Then participants will be invited to share their appreciation for our home planet respects this understanding, and as a First Nation a.m. Kicking off from the bandshell behind Earth as well as ways that we can act to proelder revealed, “a circle can expand or contract, town hall, the parade will make its merry tect our environment locally. Dress up, sing but it cannot break.” For more information, contact Leora Berman way along Gore Street to Foster and head along, decorate a sign, come rain or shine. For more information go to transitionat 705-457-4838 or tlb@thelandbetween.ca. For in to beautiful Stewart Park. The short more about the organization, visit www.theland- walk will conclude near the bandshell. Perth perth.ca/earthday17 or call Anita Payne at Mayor John Fenik will provide an update on 613 267-0881. between.ca.

We received hundreds of truly inspiring nominations for Canadian immigrants who have made a significant impact since their arrival. Now it's your turn to help choose this year's winners.