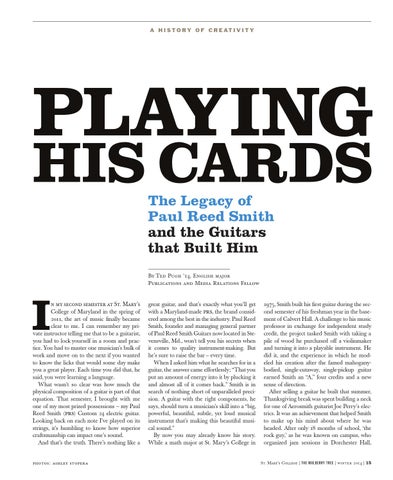 his cards The Legacy of Paul Reed Smith and the Guitars that Built Him By Ted Pugh ’14, English major Publications and Media Relations Fellow

n my second semester at St. Mary’s College of Maryland in the spring of 2011, the art of music finally became clear to me. I can remember my private instructor telling me that to be a guitarist, you had to lock yourself in a room and practice. You had to master one musician’s bulk of work and move on to the next if you wanted to know the licks that would some day make you a great player. Each time you did that, he said, you were learning a language. What wasn’t so clear was how much the physical composition of a guitar is part of that equation. That semester, I brought with me one of my most prized possessions – my Paul Reed Smith (prs) Custom 24 electric guitar. Looking back on each note I’ve played on its strings, it’s humbling to know how superior craftsmanship can impact one’s sound. And that’s the truth. There’s nothing like a photos: ashley stopera

great guitar, and that’s exactly what you’ll get with a Maryland-made prs, the brand considered among the best in the industry. Paul Reed Smith, founder and managing general partner of Paul Reed Smith Guitars now located in Stevensville, Md., won’t tell you his secrets when it comes to quality instrument-making. But he’s sure to raise the bar – every time. When I asked him what he searches for in a guitar, the answer came effortlessly; “That you put an amount of energy into it by plucking it and almost all of it comes back.” Smith is in search of nothing short of unparalleled precision. A guitar with the right components, he says, should turn a musician’s skill into a “big, powerful, beautiful, subtle, yet loud musical instrument that’s making this beautiful musical sound.” By now you may already know his story. While a math major at St. Mary’s College in

1975, Smith built his first guitar during the second semester of his freshman year in the basement of Calvert Hall. A challenge to his music professor in exchange for independent study credit, the project tasked Smith with taking a pile of wood he purchased off a violinmaker and turning it into a playable instrument. He did it, and the experience in which he modeled his creation after the famed mahoganybodied, single-cutaway, single-pickup guitar earned Smith an “A,” four credits and a new sense of direction. After selling a guitar he built that summer, Thanksgiving break was spent building a neck for one of Aerosmith guitarist Joe Perry’s electrics. It was an achievement that helped Smith to make up his mind about where he was headed. After only 18 months of school, ‘the rock guy,’ as he was known on campus, who organized jam sessions in Dorchester Hall, St. Mary’s College | The M ulb er ry Tr ee | winter 2014 | 15 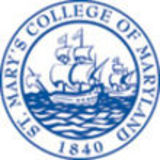