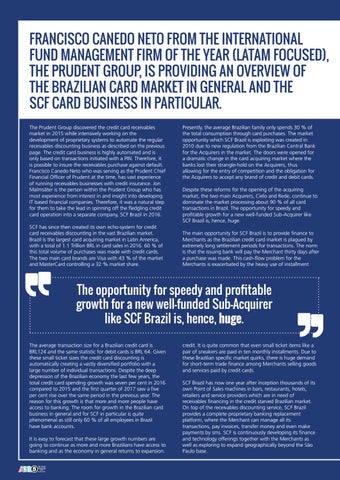 FRANCISCO CANEDO NETO FROM THE INTERNATIONAL FUND MANAGEMENT FIRM OF THE YEAR (LATAM FOCUSED), THE PRUDENT GROUP, IS PROVIDING AN OVERVIEW OF THE BRAZILIAN CARD MARKET IN GENERAL AND THE SCF CARD BUSINESS IN PARTICULAR. The Prudent Group discovered the credit card receivables market in 2015 while intensively working on the development of proprietary systems to automate the regular receivables discounting business as described on the previous page. The credit card business is highly automated and is only based on transactions initiated with a PIN. Therefore, it is possible to insure the receivables purchase against default. Francisco Canedo Neto who was serving as the Prudent Chief Financial Officer of Prudent at the time, has vast experience of running receivables businesses with credit insurance. Jon MalmsĂ¤ter is the person within the Prudent Group who has most experience from interest in and insight into developing IT based financial companies. Therefore, it was a natural step for them to take the lead in spinning off the fledgling credit card operation into a separate company, SCF Brazil in 2016. SCF has since then created its own echo-system for credit card receivables discounting in the vast Brazilian market. Brazil is the largest card acquiring market in Latin America, with a total of 1.1 Trillion BRL in card sales in 2016. 60 % of this total volume of purchases was made with credit cards. The two main card brands are Visa with 43 % of the market and MasterCard controlling a 32 % market share.

Presently, the average Brazilian family only spends 30 % of the total consumption through card purchases. The market opportunity which SCF Brazil is exploiting was created in 2010 due to new regulation from the Brazilian Central Bank for the Acquirers in the market. The doors were opened for a dramatic change in the card acquiring market where the banks lost their strangle-hold on the Acquirers, thus allowing for the entry of competition and the obligation for the Acquirers to accept any brand of credit and debit cards. Despite these reforms for the opening of the acquiring market, the two main Acquirers, Cielo and Rede, continue to dominate the market processing about 90 % of all card transactions in Brazil. The opportunity for speedy and profitable growth for a new well-funded Sub-Acquirer like SCF Brazil is, hence, huge. The main opportunity for SCF Brazil is to provide finance to Merchants as the Brazilian credit card market is plagued by extremely long settlement periods for transactions. The norm is that the issuing bank will pay the Merchant thirty days after a purchase was made. This cash-flow problem for the Merchants is exacerbated by the heavy use of installment

The opportunity for speedy and profitable growth for a new well-funded Sub-Acquirer like SCF Brazil is, hence, huge. The average transaction size for a Brazilian credit card is BRL124 and the same statistic for debit cards is BRL 64. Given these small ticket sizes the credit card discounting is automatically creating a vastly diversified portfolio with a large number of individual transactions. Despite the deep depression of the Brazilian economy the last few years, the total credit card spending growth was seven per cent in 2016 compared to 2015 and the first quarter of 2017 saw a five per cent rise over the same period in the previous year. The reason for this growth is that more and more people have access to banking. The room for growth in the Brazilian card business in general and for SCF in particular is quite phenomenal as still only 60 % of all employees in Brazil have bank accounts. It is easy to forecast that these large growth numbers are going to continue as more and more Brazilians have access to banking and as the economy in general returns to expansion.

credit. It is quite common that even small ticket items like a pair of sneakers are paid in ten monthly installments. Due to these Brazilian specific market quirks, there is huge demand for short-term trade finance among Merchants selling goods and services paid by credit cards. SCF Brazil has now one year after inception thousands of its own Point of Sales machines in bars, restaurants, hotels, retailers and service providers which are in need of receivables financing in the credit starved Brazilian market. On top of the receivables discounting service, SCF Brazil provides a complete proprietary banking replacement platform, where the Merchant can manage all its transactions, pay invoices, transfer money and even make payments by sms. SCF is continuously developing its finance and technology offerings together with the Merchants as well as exploring to expand geographically beyond the SĂŁo Paulo base.

ACQ5 is proud to announce to the world the winners of the ACQ5 Global Awards 2017. The 2017 ACQ5 Global Award winners represent the best of breed in the industry and have earned these honours by standing out in a group of very impressive finalists. We are lucky enough to work with some of the most influential and enterprising private organisations in the world and are proud to share their message with our readers. Relying on reader insight and experience to provide nominations to the panel remains the cornerstone of our program and to identify industry leaders, individuals, teams and organizations that represent the benchmark of achievement and best practice in the business world. The 12th Annual ACQ5 Global Awards honour the leading deal teams, firms and professionals whose activities set the standard for our markets. This year, companies and individuals, representing every major market in the world, became finalists for the awards. 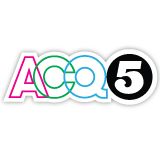