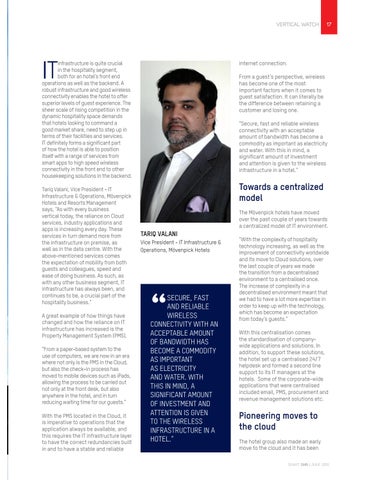 infrastructure is quite crucial in the hospitality segment, both for an hotel’s front end operations as well as the backend. A robust infrastructure and good wireless connectivity enables the hotel to offer superior levels of guest experience. The sheer scale of rising competition in the dynamic hospitality space demands that hotels looking to command a good market share, need to step up in terms of their facilities and services. IT definitely forms a significant part of how the hotel is able to position itself with a range of services from smart apps to high speed wireless connectivity in the front end to other housekeeping solutions in the backend. Tariq Valani, Vice President - IT Infrastructure & Operations, Mövenpick Hotels and Resorts Management says, “As with every business vertical today, the reliance on Cloud services, industry applications and apps is increasing every day. These services in turn demand more from the infrastructure on premise, as well as in the data centre. With the above-mentioned services comes the expectation of mobility from both guests and colleagues, speed and ease of doing business. As such, as with any other business segment, IT infrastructure has always been, and continues to be, a crucial part of the hospitality business.” A great example of how things have changed and how the reliance on IT infrastructure has increased is the Property Management System (PMS). “From a paper-based system to the use of computers, we are now in an era where not only is the PMS in the Cloud, but also the check-in process has moved to mobile devices such as iPads, allowing the process to be carried out not only at the front desk, but also anywhere in the hotel, and in turn reducing waiting time for our guests.” With the PMS located in the Cloud, it is imperative to operations that the application always be available, and this requires the IT infrastructure layer to have the correct redundancies built in and to have a stable and reliable

From a guest’s perspective, wireless has become one of the most important factors when it comes to guest satisfaction. It can literally be the difference between retaining a customer and losing one. “Secure, fast and reliable wireless connectivity with an acceptable amount of bandwidth has become a commodity as important as electricity and water. With this in mind, a significant amount of investment and attention is given to the wireless infrastructure in a hotel.”

SECURE, FAST AND RELIABLE WIRELESS CONNECTIVITY WITH AN ACCEPTABLE AMOUNT OF BANDWIDTH HAS BECOME A COMMODITY AS IMPORTANT AS ELECTRICITY AND WATER. WITH THIS IN MIND, A SIGNIFICANT AMOUNT OF INVESTMENT AND ATTENTION IS GIVEN TO THE WIRELESS INFRASTRUCTURE IN A HOTEL.”

“With the complexity of hospitality technology increasing, as well as the improvement of connectivity worldwide and its move to Cloud solutions, over the last couple of years we made the transition from a decentralised environment to a centralised once. The increase of complexity in a decentralised environment meant that we had to have a lot more expertise in order to keep up with the technology, which has become an expectation from today’s guests.” With this centralisation comes the standardisation of companywide applications and solutions. In addition, to support these solutions, the hotel set up a centralised 24/7 helpdesk and formed a second line support to its IT managers at the hotels. Some of the corporate-wide applications that were centralised included email, PMS, procurement and revenue management solutions etc. 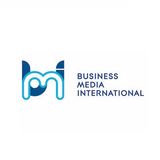