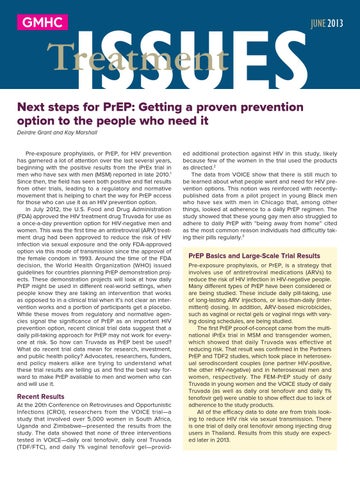 Next steps for PrEP: Getting a proven prevention option to the people who need it Deirdre Grant and Kay Marshall

Pre-exposure prophylaxis, or PrEP, for HIV prevention has garnered a lot of attention over the last several years, beginning with the positive results from the iPrEx trial in men who have sex with men (MSM) reported in late 2010.1 Since then, the ﬁeld has seen both positive and ﬂat results from other trials, leading to a regulatory and normative movement that is helping to chart the way for PrEP access for those who can use it as an HIV prevention option. In July 2012, the U.S. Food and Drug Administration (FDA) approved the HIV treatment drug Truvada for use as a once-a-day prevention option for HIV-negative men and women. This was the ﬁrst time an antiretroviral (ARV) treatment drug had been approved to reduce the risk of HIV infection via sexual exposure and the only FDA-approved option via this mode of transmission since the approval of the female condom in 1993. Around the time of the FDA decision, the World Health Organization (WHO) issued guidelines for countries planning PrEP demonstration projects. These demonstration projects will look at how daily PrEP might be used in different real-world settings, when people know they are taking an intervention that works as opposed to in a clinical trial when it’s not clear an intervention works and a portion of participants get a placebo. While these moves from regulatory and normative agencies signal the signiﬁcance of PrEP as an important HIV prevention option, recent clinical trial data suggest that a daily pill-taking approach for PrEP may not work for everyone at risk. So how can Truvada as PrEP best be used? What do recent trial data mean for research, investment, and public health policy? Advocates, researchers, funders, and policy makers alike are trying to understand what these trial results are telling us and ﬁnd the best way forward to make PrEP available to men and women who can and will use it.

Recent Results At the 20th Conference on Retroviruses and Opportunistic Infections (CROI), researchers from the VOICE trial—a study that involved over 5,000 women in South Africa, Uganda and Zimbabwe—presented the results from the study. The data showed that none of three interventions tested in VOICE—daily oral tenofovir, daily oral Truvada (TDF/FTC), and daily 1% vaginal tenofovir gel—provid-

ed additional protection against HIV in this study, likely because few of the women in the trial used the products as directed.2 The data from VOICE show that there is still much to be learned about what people want and need for HIV prevention options. This notion was reinforced with recentlypublished data from a pilot project in young Black men who have sex with men in Chicago that, among other things, looked at adherence to a daily PrEP regimen. The study showed that these young gay men also struggled to adhere to daily PrEP with “being away from home” cited as the most common reason individuals had difficultly taking their pills regularly.3

PrEP Basics and Large-Scale Trial Results Pre-exposure prophylaxis, or PrEP, is a strategy that involves use of antiretroviral medications (ARVs) to reduce the risk of HIV infection in HIV-negative people. Many different types of PrEP have been considered or are being studied. These include daily pill-taking, use of long-lasting ARV injections, or less-than-daily (intermittent) dosing. In addition, ARV-based microbicides, such as vaginal or rectal gels or vaginal rings with varying dosing schedules, are being studied. The ﬁrst PrEP proof-of-concept came from the multinational iPrEx trial in MSM and transgender women, which showed that daily Truvada was effective at reducing risk. That result was conﬁrmed in the Partners PrEP and TDF2 studies, which took place in heterosexual serodiscordant couples (one partner HIV-positive, the other HIV-negative) and in heterosexual men and women, respectively. The FEM-PrEP study of daily Truvada in young women and the VOICE study of daily Truvada (as well as daily oral tenofovir and daily 1% tenofovir gel) were unable to show effect due to lack of adherence to the study products. All of the efficacy data to date are from trials looking to reduce HIV risk via sexual transmission. There is one trial of daily oral tenofovir among injecting drug users in Thailand. Results from this study are expected later in 2013.