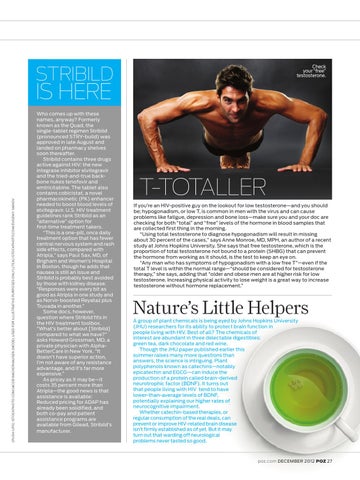 Who comes up with these names, anyway? Formerly known as the Quad, the single-tablet regimen Stribild (pronounced STRY-build) was approved in late August and landed on pharmacy shelves soon thereafter. Stribild contains three drugs active against HIV: the new integrase inhibitor elvitegravir and the tried-and-true backbone nukes tenofovir and emtricitabine. The tablet also contains cobicistat, a novel pharmacokinetic (PK) enhancer needed to boost blood levels of elvitegravir. U.S. HIV treatment guidelines rank Stribild as an “alternative” option for first-time treatment takers. “This is a one-pill, once daily treatment option that has fewer central nervous system and rash side effects, compared with Atripla,” says Paul Sax, MD, of Brigham and Women’s Hospital in Boston, though he adds that nausea is still an issue and Stribild is probably best avoided by those with kidney disease. “Responses were every bit as good as Atripla in one study and as Norvir-boosted Reyataz plus Truvada in another.” Some docs, however, question where Stribild fits in the HIV treatment toolbox. “What’s better about [Stribild] compared to what we have?” asks Howard Grossman, MD, a private physician with AlphaBetterCare in New York. “It doesn’t have superior action, I’m not aware of any resistance advantage, and it’s far more expensive.” As pricey as it may be—it costs 35 percent more than Atripla—the good news is that assistance is available: Reduced pricing for ADAP has already been solidified, and both co-pay and patient assistance programs are available from Gilead, Stribild’s manufacturer.

If you’re an HIV-positive guy on the lookout for low testosterone—and you should be; hypogonadism, or low T, is common in men with the virus and can cause problems like fatigue, depression and bone loss—make sure you and your doc are checking for both “total” and “free” levels of the hormone in blood samples that are collected first thing in the morning. “Using total testosterone to diagnose hypogonadism will result in missing about 30 percent of the cases,” says Anne Monroe, MD, MPH, an author of a recent study at Johns Hopkins University. She says that free testosterone, which is the proportion of total testosterone not bound to a protein (SHBG) that can prevent the hormone from working as it should, is the test to keep an eye on. “Any man who has symptoms of hypogonadism with a low free T”—even if the total T level is within the normal range—“should be considered for testosterone therapy,” she says, adding that “older and obese men are at higher risk for low testosterone. Increasing physical activity to lose weight is a great way to increase testosterone without hormone replacement.”

Nature’s Little Helpers A group of plant chemicals is being eyed by Johns Hopkins University (JHU) researchers for its ability to protect brain function in people living with HIV. Best of all? The chemicals of interest are abundant in three delectable digestibles: green tea, dark chocolate and red wine. Though the JHU paper published earlier this summer raises many more questions than answers, the science is intriguing. Plant polyphenols known as catechins—notably epicatechin and EGCG—can induce the production of a protein called brain-derived neurotrophic factor (BDNF). It turns out that people living with HIV tend to have lower-than-average levels of BDNF, potentially explaining our higher rates of neurocognitive impairment. Whether catechin-based therapies, or regular consumption of the real deals, can prevent or improve HIV-related brain disease isn’t firmly established as of yet. But it may turn out that warding off neurological problems never tasted so good.