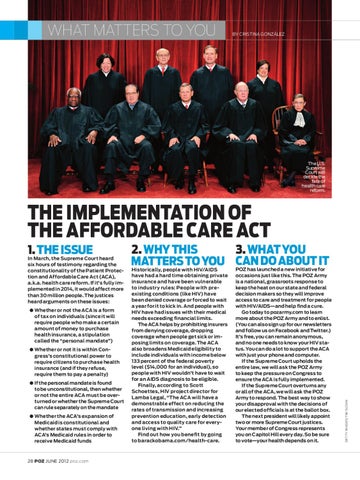 WHAT MATTERS TO YOU

The U.S. Supreme Court will decide the fate of health care reform.

THE IMPLEMENTATION OF THE AFFORDABLE CARE ACT In March, the Supreme Court heard six hours of testimony regarding the constitutionality of the Patient Protection and Affordable Care Act (ACA), a.k.a. health care reform. If it’s fully implemented in 2014, it would affect more than 30 million people. The justices heard arguments on these issues: ● Whether or not the ACA is a form of tax on individuals (since it will require people who make a certain amount of money to purchase health insurance, a stipulation called the “personal mandate”) ● Whether or not it is within Congress’s constitutional power to require citizens to purchase health insurance (and if they refuse, require them to pay a penalty) ● If the personal mandate is found to be unconstitutional, then whether or not the entire ACA must be overturned or whether the Supreme Court can rule separately on the mandate ● Whether the ACA’s expansion of Medicaid is constitutional and whether states must comply with ACA’s Medicaid rules in order to receive Medicaid funds

2. WHY THIS 3. WHAT YOU MATTERS TO YOU CAN DO ABOUT IT Historically, people with HIV/AIDS have had a hard time obtaining private insurance and have been vulnerable to industry rules: People with preexisting conditions (like HIV) have been denied coverage or forced to wait a year for it to kick in. And people with HIV have had issues with their medical needs exceeding financial limits. The ACA helps by prohibiting insurers from denying coverage, dropping coverage when people get sick or imposing limits on coverage. The ACA also broadens Medicaid eligibility to include individuals with income below 133 percent of the federal poverty level ($14,000 for an individual), so people with HIV wouldn’t have to wait for an AIDS diagnosis to be eligible. Finally, according to Scott Schoettes, HIV project director for Lamba Legal, “The ACA will have a demonstrable effect on reducing the rates of transmission and increasing prevention education, early detection and access to quality care for everyone living with HIV.” Find out how you benefit by going to barackobama.com/health-care.

POZ has launched a new initiative for occasions just like this. The POZ Army is a national, grassroots response to keep the heat on our state and federal decision makers so they will improve access to care and treatment for people with HIV/AIDS—and help find a cure. Go today to pozarmy.com to learn more about the POZ Army and to enlist. (You can also sign up for our newsletters and follow us on Facebook and Twitter.) It’s free, you can remain anonymous, and no one needs to know your HIV status. You can do a lot to support the ACA with just your phone and computer. If the Supreme Court upholds the entire law, we will ask the POZ Army to keep the pressure on Congress to ensure the ACA is fully implemented. If the Supreme Court overturns any or all of the ACA, we will ask the POZ Army to respond. The best way to show your disapproval with the decisions of our elected officials is at the ballot box. The next president will likely appoint two or more Supreme Court justices. Your member of Congress represents you on Capitol Hill every day. So be sure to vote—your health depends on it.