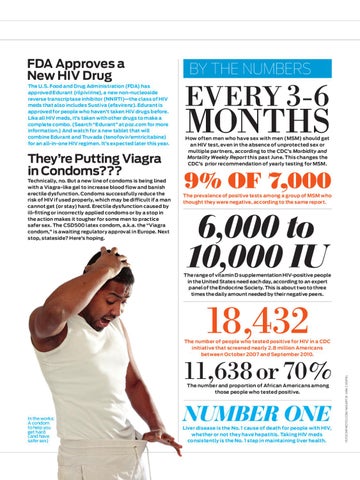 The U.S. Food and Drug Administration (FDA) has approved Edurant (rilpivirine), a new non-nucleoside reverse transcriptase inhibitor (NNRTI)—the class of HIV meds that also includes Sustiva (efavirenz). Edurant is approved for people who haven’t taken HIV drugs before. Like all HIV meds, it’s taken with other drugs to make a complete combo. (Search “Edurant” at poz.com for more information.) And watch for a new tablet that will combine Edurant and Truvada (tenofovir/emtricitabine) for an all-in-one HIV regimen. It’s expected later this year.

Technically, no. But a new line of condoms is being lined with a Viagra-like gel to increase blood flow and banish erectile dysfunction. Condoms successfully reduce the risk of HIV if used properly, which may be difficult if a man cannot get (or stay) hard. Erectile dysfunction caused by ill-fitting or incorrectly applied condoms or by a stop in the action makes it tougher for some men to practice safer sex. The CSD500 latex condom, a.k.a. the “Viagra condom,” is awaiting regulatory approval in Europe. Next stop, stateside? Here’s hoping.

How often men who have sex with men (MSM) should get an HIV test, even in the absence of unprotected sex or multiple partners, according to the CDC’s Morbidity and Mortality Weekly Report this past June. This changes the CDC’s prior recommendation of yearly testing for MSM.

The prevalence of positive tests among a group of MSM who thought they were negative, according to the same report.

The range of vitamin D supplementation HIV-positive people in the United States need each day, according to an expert panel of the Endocrine Society. This is about two to three times the daily amount needed by their negative peers.

The number and proportion of African Americans among those people who tested positive.

In the works: A condom to help you get hard (and have safer sex)

Liver disease is the No. 1 cause of death for people with HIV, whether or not they have hepatitis. Taking HIV meds consistently is the No. 1 step in maintaining liver health.

The number of people who tested positive for HIV in a CDC initiative that screened nearly 2.8 million Americans between October 2007 and September 2010.