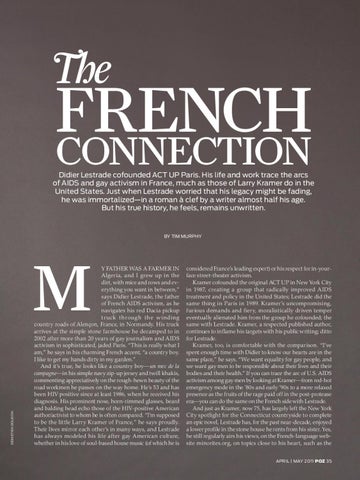 Didier Lestrade cofounded ACT UP Paris. His life and work trace the arcs of AIDS and gay activism in France, much as those of Larry Kramer do in the United States. Just when Lestrade worried that his legacy might be fading, he was immortalized—in a roman à clef by a writer almost half his age. But his true history, he feels, remains unwritten.

Y FATHER WAS A FARMER IN Algeria, and I grew up in the dirt, with mice and cows and everything you want in between,” says Didier Lestrade, the father of French AIDS activism, as he navigates his red Dacia pickup tr uck through the w inding country roads of Alençon, France, in Normandy. His truck arrives at the simple stone farmhouse he decamped to in 2002 after more than 20 years of gay journalism and AIDS activism in sophisticated, jaded Paris. “This is really what I am,” he says in his charming French accent, “a country boy. I like to get my hands dirty in my garden.” And it’s true, he looks like a country boy—un mec de la campagne—in his simple navy zip-up jersey and twill khakis, commenting appreciatively on the rough-hewn beauty of the road workmen he passes on the way home. He’s 53 and has been HIV positive since at least 1986, when he received his diagnosis. His prominent nose, horn-rimmed glasses, beard and balding head echo those of the HIV-positive American author/activist to whom he is often compared. “I’m supposed to be the little Larry Kramer of France,” he says proudly. Their lives mirror each other’s in many ways, and Lestrade has always modeled his life after gay American culture, whether in his love of soul-based house music (of which he is

considered France’s leading expert) or his respect for in-yourface street-theater activism. Kramer cofounded the original ACT UP in New York City in 1987, creating a group that radically improved AIDS treatment and policy in the United States; Lestrade did the same thing in Paris in 1989. Kramer’s uncompromising, furious demands and fiery, moralistically driven temper eventually alienated him from the group he cofounded; the same with Lestrade. Kramer, a respected published author, continues to inflame his targets with his public writing; ditto for Lestrade. Kramer, too, is comfortable with the comparison. “I’ve spent enough time with Didier to know our hearts are in the same place,” he says. “We want equality for gay people, and we want gay men to be responsible about their lives and their bodies and their health.” If you can trace the arc of U.S. AIDS activism among gay men by looking at Kramer—from red-hot emergency mode in the ’80s and early ’90s to a more relaxed presence as the fruits of the rage paid off in the post-protease era—you can do the same on the French side with Lestrade. And just as Kramer, now 75, has largely left the New York City spotlight for the Connecticut countryside to complete an epic novel, Lestrade has, for the past near-decade, enjoyed a lower profile in the stone house he rents from his sister. Yes, he still regularly airs his views, on the French-language website minorites.org, on topics close to his heart, such as the APRIL | MAY 2011 POZ 35