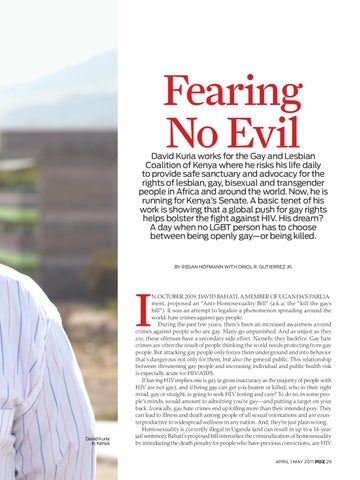 David Kuria works for the Gay and Lesbian Coalition of Kenya where he risks his life daily to provide safe sanctuary and advocacy for the rights of lesbian, gay, bisexual and transgender people in Africa and around the world. Now, he is running for Kenya’s Senate. A basic tenet of his work is showing that a global push for gay rights helps bolster the ﬁght against HIV. His dream? A day when no LGBT person has to choose between being openly gay—or being killed.

I David Kuria in Kenya

N OCTOBER 2009, DAVID BAHATI, A MEMBER OF UGANDA’S PARLIAment, proposed an “Anti-Homosexuality Bill” (a.k.a. the “kill the gays bill”). It was an attempt to legalize a phenomenon spreading around the world: hate crimes against gay people. During the past few years, there’s been an increased awareness around crimes against people who are gay. Many go unpunished. And as unjust as they are, these offenses have a secondary side effect. Namely, they backfire. Gay hate crimes are often the result of people thinking the world needs protecting from gay people. But attacking gay people only forces them underground and into behavior that’s dangerous not only for them, but also the general public. This relationship between threatening gay people and increasing individual and public health risk is especially acute for HIV/AIDS. If having HIV implies one is gay (a gross inaccuracy as the majority of people with HIV are not gay), and if being gay can get you beaten or killed, who in their right mind, gay or straight, is going to seek HIV testing and care? To do so, in some people’s minds, would amount to admitting you’re gay—and putting a target on your back. Ironically, gay hate crimes end up killing more than their intended prey. They can lead to illness and death among people of all sexual orientations and are counterproductive to widespread wellness in any nation. And, they’re just plain wrong. Homosexuality is currently illegal in Uganda (and can result in up to a 14-year jail sentence); Bahati’s proposed bill intensifies the criminalization of homosexuality by introducing the death penalty for people who have previous convictions, are HIV APRIL APRIL||MAY MAY2010 2011 POZ 29