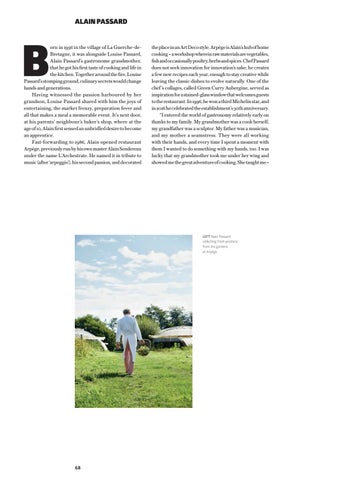 orn in 1956 in the village of La Guerche-deBretagne, it was alongside Louise Passard, Alain Passard’s gastronome grandmother, that he got his first taste of cooking and life in the kitchen. Together around the fire, Louise Passard’s stomping ground, culinary secrets would change hands and generations. Having witnessed the passion harboured by her grandson, Louise Passard shared with him the joys of entertaining, the market frenzy, preparation fever and all that makes a meal a memorable event. It’s next door, at his parents’ neighbour’s baker’s shop, where at the age of 10, Alain first sensed an unbridled desire to become an apprentice. Fast-forwarding to 1986, Alain opened restaurant Arpège, previously run by his own master Alain Senderens under the name L’Archestrate. He named it in tribute to music (after ‘arpeggio’), his second passion, and decorated

the place in an Art Deco style. Arpège is Alain’s hub of home cooking – a workshop wherein raw materials are vegetables, fish and occasionally poultry, herbs and spices. Chef Passard does not seek innovation for innovation’s sake; he creates a few new recipes each year, enough to stay creative while leaving the classic dishes to evolve naturally. One of the chef ’s collages, called Green Curry Aubergine, served as inspiration for a stained-glass window that welcomes guests to the restaurant. In 1996, he won a third Michelin star, and in 2016 he celebrated the establishment’s 30th anniversary. “I entered the world of gastronomy relatively early on thanks to my family. My grandmother was a cook herself, my grandfather was a sculptor. My father was a musician, and my mother a seamstress. They were all working with their hands, and every time I spent a moment with them I wanted to do something with my hands, too. I was lucky that my grandmother took me under her wing and showed me the great adventure of cooking. She taught me » 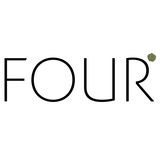