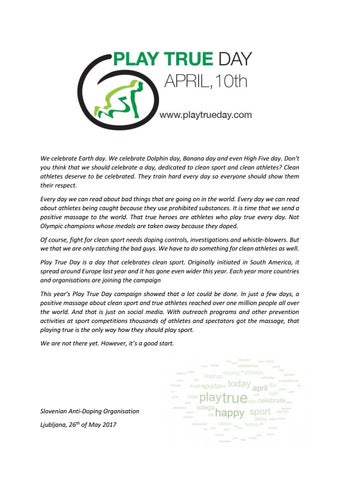 We celebrate Earth day. We celebrate Dolphin day, Banana day and even High Five day. Don't you think that we should celebrate a day, dedicated to clean sport and clean athletes? Clean athletes deserve to be celebrated. They train hard every day so everyone should show them their respect. Every day we can read about bad things that are going on in the world. Every day we can read about athletes being caught because they use prohibited substances. It is time that we send a positive massage to the world. That true heroes are athletes who play true every day. Not Olympic champions whose medals are taken away because they doped. Of course, fight for clean sport needs doping controls, investigations and whistle-blowers. But we that we are only catching the bad guys. We have to do something for clean athletes as well. Play True Day is a day that celebrates clean sport. Originally initiated in South America, it spread around Europe last year and it has gone even wider this year. Each year more countries and organisations are joining the campaign This yearâ&#x20AC;&#x2122;s Play True Day campaign showed that a lot could be done. In just a few days, a positive massage about clean sport and true athletes reached over one million people all over the world. And that is just on social media. With outreach programs and other prevention activities at sport competitions thousands of athletes and spectators got the massage, that playing true is the only way how they should play sport. We are not there yet. However, itâ&#x20AC;&#x2122;s a good start.

PLAY TRUE DAY ACTIVITIES In 2017, different activities were carried out in numerus countries from Central and South America, Europe and Africa in order to celebrate Play True Day. Lectures, outreach programs, interviews for media, (social) media campaign, publication of videos, photos of athletes playing true, anti-doping pledges are some of the examples how Play True Day can be celebrated.

NADA AUSTRIA News about Play True Day in their website https://www.nada.at/de/boxnewsshow31-nadaaustria-feiert-den-alljaehrlichen-play-true-day-am-10.-april-2017 Publication of new video about anti-doping prevention program on 10th of April https://www.youtube.com/watch?v=MeFUdHv4iEA Prevention activities at European Rookie Cup tournament in Ice Hockey in Villach between 13th and 15th of April, 2017

COSTA RICA ANTI-DOPING COMISSION preventive training on anti-doping issues and discussion about the importance of the Play True Day for the sport World in several provinces of the country CROATIAN INSTITUTE FOR TOXICOLOGY AND ANTI-DOPING Outreach program at cross-country event "Kros sportskih novosti" in Bundek on 9th of April, 2017

MALTESSE OLYMPIC COMMITTEE outreach activity at the Malta Open Junior Tournament in golf on 9th and 10th of April, 2017

ECUADOR ANTI-DOPING ORGANISATION Invitation to celebrate Play True Day to all athletes, support personnel, national sport organizations, parents ... Initiative was called "Sport of values" - the objective of which was to strengthen one's values in sport and their attitude toward the clean sport and fight against doping

PLAY TURE DAY ON SOCIAL MEDIA Play True Day was well promoted over social media. More than three hundred posts from 200 different users from around the world reached over 1.1 million people with almost 1.7 impressions. Twitter and You Tube were the most commonly used tools. Olympic, Paralympic and World champions like Beckie Scott (cross-country skiing), Angela Ruggiero (Ice Hockey), Victoria Aggar (rowing), Paula Radcliff (marathon) and many others elite and recreational athletes show their support with videos, posts and tweets about the Play True Day and the importance of playing true. Numerous NADOs, National Sport Federations, Olympic and Paralympic Committees from USA, Australia, Chile, Venezuela, San Marino, Germany, France, Spain etc. shared the information about the Play True Day on their websites and social media. WADA's Director General, Olivier Niggli, sent a message to all stakeholders over You Tube https://www.youtube.com/watch?v=ZJkxaseuX3s 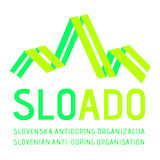