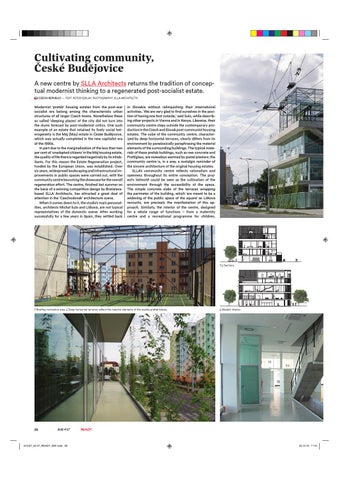 Modernist ‘prefab’ housing estates from the post-war socialist era belong among the characteristic urban structures of all larger Czech towns. Nonetheless these so called ‘sleeping places’ of the city did not turn into the slums forecast by post-modernist critics. One such example of an estate that retained its lively social heterogeneity is the Máj (May) estate in České Budějovice, which was actually completed in the new capitalist era of the 1990s. In part due to the marginalization of the less than two per cent of ‘unadapted citizens’ in the Máj housing estate, the quality of life there is regarded negatively by its inhabitants. For this reason the Estate Regeneration project, funded by the European Union, was established. Over six years, widespread landscaping and infrastructural improvements in public spaces were carried out, with the community centre becoming the showcase for the overall regeneration effort. The centre, finished last summer on the basis of a winning competition design by Bratislavabased SLLA Architects, has attracted a great deal of attention in the ‘Czechoslovak’ architecture scene. When it comes down to it, the studio’s main personalities, architects Michal Sulo and Lišková, are not typical representatives of the domestic scene. After working successfully for a few years in Spain, they settled back

in Slovakia without relinquishing their international activities. ‘We are very glad to find ourselves in the position of having one foot outside,’ said Sulo, while describing other projects in Vienna and in Kenya. Likewise, their community centre steps outside the contemporary production in the Czech and Slovak post-communist housing estates. The cube of the community centre, characterized by deep horizontal terraces, clearly differs from its environment by paradoxically paraphrasing the material elements of the surrounding buildings. The typical materials of these prefab buildings, such as raw concrete and Profilglass, are nowadays warmed by pastel plasters; the community centre is, in a way, a nostalgic reminder of the sincere architecture of the original housing estates. SLLA’s community centre reflects rationalism and openness throughout its entire conception. The project’s leitmotif could be seen as the cultivation of the environment through the accessibility of the space. The simple concrete slabs of the terraces wrapping the perimeter of the building, which ‘are meant to be a widening of the public space of the square’ as Lišková recounts, are precisely the manifestation of this approach. Similarly, the interior of the centre, designed for a whole range of functions – from a maternity centre and a recreational programme for children,

to a barrier-free centre and a social counselling service – is not particularly architecturally animated. The modesty of such an approach is grasped by Sulo: ‘What interests us is designing architecture that knows how to change.’ The architects, however, definitely did not try to simply design some kind of open structure. They did attempt to model the functional and layout scheme in cooperation with its future users, but after winning the competition in 2010, their efforts towards a more in-depth planning collaboration came to nothing and, in contrast to their competition proposal, the implemented project does not incorporate as many changes as they themselves would have wished. Sulo recalls that ‘we were the ones who initiated several changes, which were not realized because of the way the grant programme works.’ The strict conditions of the grant system caused the investor, the city of České Budejovice, to lose interest in becoming more involved in the project, even though the promised changes would have cost less. Yet, despite the fact that the architects are not completely satisfied that they did not manage to bring in as many transformations as they themselves would have liked, the ‘building with the playground on the roof’ became the new focus of the estate. Instead of using obtrusive visuality, this ‘cherry on top’ makes the conceptually frugal architecture of the centre more accessible. Thanks to the possibilities that the built public space itself provides, it becomes a real centre of the social and community life of the Máj housing estate. MÁJ COMMUNITY CENTRE, 2013–2014 Architect Established Client Address Info ↓ Ground floor

↓ Open space for play and other functions