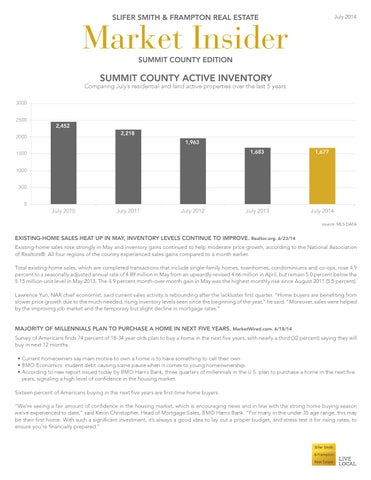 EXISTING-HOME SALES HEAT UP IN MAY, INVENTORY LEVELS CONTINUE TO IMPROVE. Realtor.org. 6/23/14 Existing-home sales rose strongly in May and inventory gains continued to help moderate price growth, according to the National Association of Realtors®. All four regions of the country experienced sales gains compared to a month earlier. Total existing-home sales, which are completed transactions that include single-family homes, townhomes, condominiums and co-ops, rose 4.9 percent to a seasonally adjusted annual rate of 4.89 million in May from an upwardly-revised 4.66 million in April, but remain 5.0 percent below the 5.15 million-unit level in May 2013. The 4.9 percent month-over-month gain in May was the highest monthly rise since August 2011 (5.5 percent). Lawrence Yun, NAR chief economist, said current sales activity is rebounding after the lackluster first quarter. “Home buyers are benefiting from slower price growth due to the much-needed, rising inventory levels seen since the beginning of the year,” he said. “Moreover, sales were helped by the improving job market and the temporary but slight decline in mortgage rates.”

MAJORITY OF MILLENNIALS PLAN TO PURCHASE A HOME IN NEXT FIVE YEARS. MarketWired.com. 6/18/14 Survey of Americans finds 74 percent of 18-34 year olds plan to buy a home in the next five years, with nearly a third (32 percent) saying they will buy in next 12 months. • Current homeowners say main motive to own a home is to have something to call their own • BMO Economics: student debt causing some pause when it comes to young homeownership. • According to new report issued today by BMO Harris Bank, three quarters of millennials in the U.S. plan to purchase a home in the next five years, signaling a high level of confidence in the housing market. Sixteen percent of Americans buying in the next five years are first-time home buyers. “We’re seeing a fair amount of confidence in the housing market, which is encouraging news and in line with the strong home buying season we’ve experienced to date,” said Kevin Christopher, Head of Mortgage Sales, BMO Harris Bank. “For many in the under 35 age range, this may be their first home. With such a significant investment, it’s always a good idea to lay out a proper budget, and stress test it for rising rates, to ensure you’re financially prepared.” 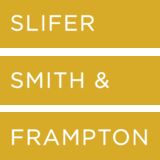