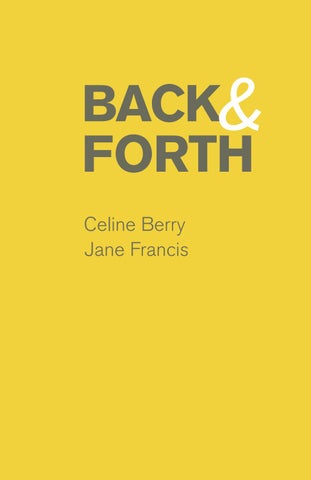 BACK& FORTH Celine Berry Jane Francis

BACK & FORTH showcases the work of Celine Berry and Jane Francis, and is the result of eight months of intense focussed attention as part of the Vancouver Island School of Art’s Independent Studio Program. The program allows for people who have already completed a degree or diploma to have a studio space, meet with a mentor on a bi-weekly basis, participate in a group seminar course and take courses at the school. During this time Berry and Francis also worked with two of our Curatorial Studies students, Natasha van Netten and Karen Jones, who have both contributed thoughtful essays to this catalogue.

BACK & FORTH is an exhibition that offers two alternate ways to think about memory, personal history and how the body encompasses physical space. Celine Berry’s representational paintings are narratives informed by photomontages that take into consideration both the present and the past. The bodies in the paintings are engaged in various actions that take place at a summer cottage: sitting, standing, lying, swimming and diving. The memory recorded is one of the body in action in a specific place, but at different times. In her larger works past and present are differentiated by a tonal change, with the past being in neutral tones. Berry’s paintings seem to be straightforward representations of cottage life, however after more considered observation, the discrepancies in the picture plane of scale and colour reveal a world that is not quite what it seems. It is a world that goes back and forth from the real to the remembered, from the present to the past. In Jane Francis’ abstract paintings the physical gesture of the body moving in space is revealed by her dynamic brushwork. Her paintings are approximately the same height as Francis, so her body is part of the painting as soon as she makes the first mark across the paper or wood panels. The source for Francis’ work is close observation of how things grow in nature, and her memories of being immersed in nature at her summer cottage. Francis uses physical action to mimic the way an object in nature might grow; she vigourously draws her arm from the centre to the edge of the work in a repeated back and forth action to capture the essence of the form as she remembers it to be. While both Berry and Francis start with subject matter that is rooted deeply in memory of place and object, they reconstruct these memories to create a new imagined narrative that is neither past nor present, but rather a combination of the two. They are both committed to understanding their experience in the world and to representing this in the most authentic way possible. Wendy Welch Executive Director, Vancouver Island School of Art

Celine Berry by Natasha van Netten Celine Berry’s figurative oil paintings are both nostalgic and unfamiliar. The large-scale work speaks to the hyper-idyllic and selective quality of memory. Her paintings, inspired by photomontage, explore the simultaneously additive and subtractive, accumulative and fragmented aspects of recollection. Her work activates my own summer memories, causing me to search each scene for familiar faces. Yet they elude me. These “picture perfect” paintings leave me feeling unsettled, and I wonder if they could possibly be as idyllic as they seem. The paintings jump back and forth between time, but not place. Berry’s practice examines strange juxtapositions of figures from the past and present. She creates preliminary photomontages to investigate the possibilities of combining multiple generations (grandparents, cousins, aunts and uncles) on a single plane. Past, present and future co-exist, brought together through the consistency of the lake. Berry upsets the rules of perspective, scale, and gravity. She stacks scenes in the air, floats figures in space and places giant-sized babies next to mouse-sized men. The work contains a mash-up of reality turned fiction. This series, which Berry has been developing since 2009, revolves around her favourite place, her summer cottage at Lake Hughes. She has returned to this lake for past 28 years, and travels up to 4,500 kilometres each way. Distance, like time, adds nostalgia to memory. Recently Berry has become fascinated with the history of the lake, and has engaged in research with locals to learn about the people who lived there in the past and present. She uses photos of her family and friends as source material in combination with photos she has collected of the lake that date back to the 1930s. Berry’s work follows a rich history of artists that also captured carefree moments of leisure; Georges Seurat’s A Sunday on La Grand Jatte and Maurice Prendergast’s Nantasket Beach immediately come to mind. There are also similarities between Berry’s series and the figurative work of Edward Hopper and Eric Fischl. Like Hopper, she is interested in

capturing candid interactions that contain open narratives. In Hopper’s paintings there is a strong feeling of uncertainty, but in Berry’s work this feeling is only hinted at by the absence of concern. Fischl’s Recent Beach series also contains strange juxtapositions of bathers and strange shifts of scale. While Fischl’s paintings seem to be actively unfolding, Berry’s series maintains the appearance of frozen time, as in a film still, referring back to photography. Her paintings are reminiscent of early Netherlandic still life paintings. Just as these historical paintings are overflowing with wine, ripe fruit, and fresh bread which may soon spoil, Berry’s paintings contain fleeting moments gone in an instant. The bitterness of memory is in its temporality. Similar to how the fruit in van Dyck’s Pièce de Banquet acts as a memento mori, Berry’s paintings depict happy moments fallen into the dark canyon of memory. In all of Berry’s work there are strong common threads of memory, nostalgia and place. Her paintings are full of detail, yet they maintain an open narrative. Brimming with bright colours and active figures the work has a haunting feeling of something that is lost. There is the possibility in each painting that the idyllic scenes are not as tranquil as they appear. Celine Berry Race to the Island (IV) 2015 Oil on board 12” x 9”

Jane Francis by Karen Jones Jane Francis’ large-scale abstract paintings capture the essence and energy of plant forms. These are physical paintings for Francis as many of the works are the same size or larger than her. Her process begins by standing in front of her work and visualizing the way plant forms grow in nature; taking the time to imagine how she will express the sensation of the plant growth. Then, using the force of her entire body, and often painting with both hands simultaneously, she begins to make her highly expressive gestural marks. The confidence and strength conveyed in these latest paintings is evidence that Francis has dedicated the last eight months to drawing and painting her responses to various plant forms. Assiduously working through this single idea, the repetition of her actions has become part of her implicit memory; her body unburdened from focusing on details, allowing Francis to more freely make her visceral marks and connect with the paintings. There is direct ancestry in Francis’ work to the works of gestural abstraction artists such as: Jackson Pollock, Joan Mitchell, Franz Kline, and Helen Frankenthaler. Like Francis, these artists were interested in making art that is instinctual, spontaneous, and dynamic. Francis’ expressive, loose brush marks, full engagement of her body in the painting process, and working “in” her paintings firmly root her work in this genre. Francis’ work also contains characteristics of Zen calligraphy, both visually and in the meditative approach to her paintings. However, freed from the confines of factual letter making, Francis is responding to the memory of a shape or a form. The paint from her brush records and conveys each bodily movement, position and pressure. Respecting and acknowledging what has come before, Francis does not conceal previous marks; rather each new layer adds to the complexity of the work. The paintings are a continuance of earlier drawings and paintings, and while Francis maintains the limited palette of earth tones, black paint is now a dominant medium. In some works the paint is layered and collage is added to build up surfaces that form a relief appearance, giving the

work a sculptural quality. The gestural marks are powerful and deliberate, crossing over and through each other to create opaque mappings of the energy of Francis’ movements; the velocity of her actions documented. The opacity of the thick marks give way to raw areas of the substrate and delicate washes of earth-toned paint; providing enough tension to offer a sense of depth and emergent life. While Francis’ work began with the idea of natural plant forms, it soon became more about the abstract nature of making marks to represent her responses to the life forces and characteristics of her subject matter. Through her dedication to her idea, and her expressive, gestural brush marks, Francis is capturing the ineffable patterns of growth and life forces.

CELINE BERRY Celine Berryâ&#x20AC;&#x2122;s previous careers were in nursing and raising her family. She had a life-long dream of attending art school and began her formal education at Vancouver Island School of Art in 2008. After gaining her Diploma of Fine Art in 2013, she was awarded a British Columbia Arts Council Scholarship for transfer to the University of Gloucestershire in the United Kingdom where she completed her Bachelor of Fine Arts with First Class Honours. In 2015, she received a scholarship from the Vermont Studio Center to attend a month long residency; she used this time to prepare for her first solo show that year. Most recently Celine completed the Independent Studio Program at Vancouver Island School of Art and serves as a board member for the school.

JANE FRANCIS Jane Francis began her studies at the Central Technical School Art Centre (1972) in Toronto and continued on to Sheridan College in Oakville, Ontario (1976) to focus on graphic design. For over a decade she has been studying under some of the most accomplished art educators in Victoria. In 2015, after a successful career as an art director and graphic designer, Jane began devoting her time fully to her art practice. She has participated in the Studio Residency program (2014) at the Metchosin International School of the Arts and has completed the Independent Studies Program (2016) at Vancouver Island School of Art.

Acknowledgements We would like to thank and acknowledge the following people for their support: Celine Berry and Jane Francis, for participating in our Independent Studio Program and producing such strong and exciting work over the relatively short period of eight months. Natasha van Netten and Karen Jones for working so diligently on the illuminating essays in this catalogue. The Curatorial Studies students 2015/2016 for their dedication and care in installing the BACK & FORTH exhibition (Denise Dowdy, Karima Heredia, Karen Jones, JoAnne Kahan, Ari Martinez, Natasha van Netten, Jennifer Wilson). Mentors Neil McClelland who worked with Celine, Wendy Welch who worked Jane Francis, and Barrie Szekely who participated in the adjudication. The Diploma of Fine Arts students (Ann Connelly, Joanne Hewko, Natasha van Netten, Judy Reed and Nicky Rendell), who were there to encourage and support Celine and Jane. Melissa Gignac, our magnificent office manager who works tirelessly to make sure all things related to the Vancouver Island School of Art and the Slide Room Gallery are organized and have the best outcomes possible. And all the community supporters, volunteers, faculty and students who make the Vancouver Island School of Art and Slide Room Gallery an important part of the Victoria community. Photo credit: All images in catalogue by Jo-Ann Richards, Works Photography Graduation exhibition of the Independent Studio Program at VISA 2016

Graduation exhibition of the Independent Studio Program at VISA 2016