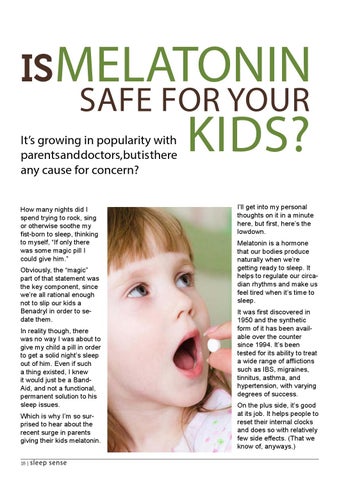 It’s growing in popularity with parents and doctors, but is there any cause for concern? How many nights did I spend trying to rock, sing or otherwise soothe my fist-born to sleep, thinking to myself, “If only there was some magic pill I could give him.” Obviously, the “magic” part of that statement was the key component, since we’re all rational enough not to slip our kids a Benadryl in order to sedate them. In reality though, there was no way I was about to give my child a pill in order to get a solid night’s sleep out of him. Even if such a thing existed, I knew it would just be a BandAid, and not a functional, permanent solution to his sleep issues. Which is why I’m so surprised to hear about the recent surge in parents giving their kids melatonin. 18 |

KIDS? I’ll get into my personal thoughts on it in a minute here, but first, here’s the lowdown. Melatonin is a hormone that our bodies produce naturally when we’re getting ready to sleep. It helps to regulate our circadian rhythms and make us feel tired when it’s time to sleep. It was first discovered in 1950 and the synthetic form of it has been available over the counter since 1994. It’s been tested for its ability to treat a wide range of afflictions such as IBS, migraines, tinnitus, asthma, and hypertension, with varying degrees of success. On the plus side, it’s good at its job. It helps people to reset their internal clocks and does so with relatively few side effects. (That we know of, anyways.) The January issue of our quarterly Sleep Sense magazine. A fun, informative look at kids, sleep, parenting, and family life.

The January issue of our quarterly Sleep Sense magazine. A fun, informative look at kids, sleep, parenting, and family life.