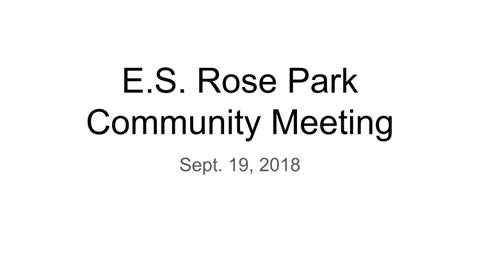 Why We’re Here ● After the bill passed, residents expressed concerns about: ○ Location: the building would be built on a hill with historic significance, and near residences ○ Lease payment: residents asked that Belmont pay more to use an additional part of the park ○ Use: residents asked about terms of public use of the facility ○ Expansion: some residents didn’t feel comfortable with Belmont using more space

Why We’re Here ● In response, Belmont officials, Edgehill residents and several Councilmembers held a variety of meetings. Those meetings have been held between June 2017 and July 2018. ● From those meetings, CM Sledge has proposed a new amendment, to take the place of the current amendment.

New Amendment In addition, at its own expense, Belmont will construct an approximately 80 foot x 135 foot indoor batting facility and related training space, office, and meeting room (â&#x20AC;&#x153;Facilityâ&#x20AC;?) on the Property abutting the southern edge of the existing baseball field and stands as illustrated on the attached Exhibit A. Metro shall schedule the use of the Facility in the same manner as Metro currently schedules the use of existing storage and locker rooms on the Property. Belmont agrees to comply with all of the requirements already mentioned herein and agrees to relocate a portion of the outdoor basketball courts to accommodate the construction of the Facility.

New Amendment Further, Belmont shall provide an annual grant to Metro in the amount of $24,300 plus indirect costs calculated at 17.62% to fund the operation of the Easley Center at Rose Park on Saturdays. The grant shall continue until such time as Metro secures funds from the Operating Budget of Metropolitan Government to support Saturday operating hours for one or more of Metroâ&#x20AC;&#x2122;s neighborhood community centers. In addition, Belmontâ&#x20AC;&#x2122;s annual lease payment to Metro shall be increased by $5,000 which shall be divided proportionately between Metro Parks Department, Rose Park Middle School and Carter Lawrence Elementary School.

New Amendment ● The new amendment attempts to address the issues brought up in the meetings over the last year. ○ Location: the building would be built next to the baseball field ○ Lease payment: Belmont would pay approximately $40k more annually to pay for a staffer to open Easley Community Center on Saturdays ○ Use: Public will be able to use the batting facility and a conference room on the second floor ○ Expansion: Building will be Metro’s property (same). Belmont will pay for repairs/shifts in courts

Current use of E.S. Rose Park

Current use of E.S. Rose Park

What happens next? Please fill out your feedback card and send it to the inside end of the table ● This feedback will be used to shape the next meeting on Saturday, Oct. 13 at 8:30 a.m. at Operation Stand Down. ● This meeting will focus on community discussion. If you think of additional questions, you can contact CM Sledge at: ● Call/Text: (615) 442-3727 ● Email: colby.sledge@nashville.gov Amendment would be filed for three readings at Metro Council (date pending)