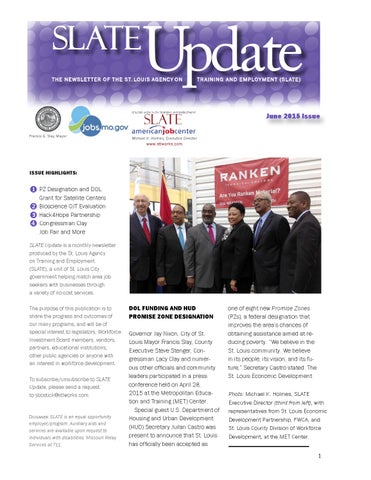 Z Designation and DOL u P

Grant for Satellite Centers ioscience OJT Evaluation  B H ack4Hope Partnership  ongressman Clay  C Job Fair and More SLATE Update is a monthly newsletter produced by the St. Louis Agency on Training and Employment (SLATE), a unit of St. Louis City government helping match area job seekers with businesses through a variety of no-cost services. The purpose of this publication is to share the progress and outcomes of our many programs, and will be of special interest to legislators, Workforce Investment Board members, vendors, partners, educational institutions, other public agencies or anyone with an interest in workforce development. To subscribe/unsubscribe to SLATE Update, please send a request to sbostick@stlworks.com.

Disclaimer: SLATE is an equal opportunity employer/program. Auxiliary aids and services are available upon request to individuals with disabilities. Missouri Relay Services at 711.

one of eight new Promise Zones (PZs), a federal designation that improves the area’s chances of obtaining assistance aimed at reducing poverty. “We believe in the St. Louis community. We believe in its people, its vision, and its future,” Secretary Castro stated. The St. Louis Economic Development Photo: Michael K. Holmes, SLATE Executive Director (third from left), with representatives from St. Louis Economic Development Partnership, FWCA, and St. Louis County Division of Workforce Development, at the MET Center.

“We believe in St. Louis community. We believe in its people, its vision, and its future.” ~Secretary Julian castro, u.s. department of housing and urban development

Partnership was the organization that applied for and facilitated this designation; SLATE and many other public and private organizations assisted in the process. Shortly after this significant news, Governor Nixon followed up by exclaiming, “We just got word from [DOL] Secretary Perez that $5 million is on its way to this very region. $5 million to help employ 3,000 young people.” The U.S. Department of Labor (DOL) is providing a $5 million special demonstration grant to establish a network of satellite career centers in under-served areas of St. Louis City and County. These funds will provide proof of concept that smaller, neighborhood based centers, co-located with community partners, are viable. The pilot funds were awarded as the result of an application to DOL submitted by the Missouri Division of Workforce Development on behalf of Family and Workforce Centers of America (FWCA) at the MET Center, SLATE, and the St. Louis County Division of Workforce Development. With these new funds, SLATE will establish two of five proposed satellite centers; St. Louis County will establish two more, while the existing one at the MET Center will be expanded. Mayor Slay praised the collaboration that made the grant possible. “I think of community as our region, and we 2

certainly are a regional economy. We have a regional workforce, regional challenges, a regional image. It is important that we work together as a region,” he said. Taken together, these two announcements represent a significant step in the ongoing effort to address income inequality and lack of opportunity in historically impoverished urban communities. Governor Nixon addressed Secretary Castro directly when he said, “I guarantee on behalf of the state, we will do everything in our power to make sure this PZ designation, and these additional DOL dollars [give]...more young folks, more unemployed folks, the basic dignity of a job and a career, and move this region forward.” SLATE Selected for DOL Best Practices Evaluation The Department of Labor’s Employment and Training Administration (ETA) has selected nine organizations nationwide to take part in an evaluation of the Jobs and Innovation Accelerator Challenge (JIAC) and Advanced Manufacturing (AM-JIAC) Grants. SLATE is pleased to announce that our Bioscience Jobs Accelerator Project has been selected as one of the sites to be evaluated. This summer, representatives from Ann Arbor-based Mathematica Policy Research will

visit SLATE to survey records and interview staff at our American Job Center and at the various partners who helped make this collaborative endeavor possible. The JIAC grants were unique in that they aligned financial resources from three federal agencies: ETA, the Department of Commerce (DOC), and the Small Business Administration (SBA). The goal of the evaluation is to build a better understanding as to how these partnerships were created, the effect of the grants on the local economy, lessons learned, and plans for sustainability. As previously reported, SLATE’s grant helped place 74 jobseekers at 27 different start-ups over the past three years through the use of Onthe-Job Training (OJT) funds. As a result of the JIAC, SLATE’s Business Development department was able to provide a substantial boost to the local bioscience sector. The U.S. Department of Labor told us, “Your cluster was chosen partially because DOL considers it to be one of the more successful clusters; we would like to learn more about how your cluster has achieved this success.” SLATE looks forward to working with Mathematica on this evaluation, and will continue to look for additional ways to serve the St. Louis business community.

Hack4Hope’s Nicole Franklin brings coding experience to stl youth On July 10-12, the newly created Hack4Hope Hackathon will take place at the T-REX facility in downtown St. Louis. The event will facilitate real-world problem solving and help teen students to feel empowered as they take an idea and turn it into an actual technology product over the course

of one fast-paced weekend. To help inaugurate this exciting new event, SLATE will be working with native St. Louisan Nicole Franklin, the independent filmmaker who spearheaded Hack4Hope. “Filmmaking is something I’ve wanted to do since grade school. I really wanted to work behind the scenes and tell stories about people of color,” Nicole said. A freelance news editor for over two decades, she now heads EPIPHANY Inc., a film and digital media company nationally recognized for bringing talented youth into the spotlight. Although she works from an office in New Jersey, her heart has remained in her hometown. “I always knew I wanted to come back to St. Louis and say something to kids; tell them, ‘here’s how to do it, how to pick up a skill.’ ” For years, to hack has meant the illegal breach of a secure computer, but the expression is taking on new meaning today. “[Youth] have turned the word around so that it means actively making a difference or solving a problem. Jump into the fire! You can hack your career, your problems, your vision of your own life,” Nicole said. On July 8, from 6 to 8 pm, SLATE will host an information session for youth from 7th through

12th grade interested in the Hack4Hope Hackathon. Nicole says “we are honored to have SLATE as a partner - the tech industry wants to reach and engage underserved populations, and you are the perfect venue to do that.” The Hackathon will bring together youth with adult professional IT and coding mentors in lightning rounds to build an application. Ms. Franklin anticipates that the apps will not be abstract, but specific solutions to local needs. For example, youth could harness today’s technology to encourage and promote fruit vendors, a once common sight in St. Louis, and reestablish them in their own neighborhood. Nicole emphasizes that the Hack4Hope experience will not end with the Hackathon, but rather will continue through the Hack4Hope sixmonth academy. In this way, youth will be able to continue to work on their ideas, explore technology and create tangible career pathways. Hack4Hope is made possible by Nicole’s partnership with ITEN and the Educational Exchange Corps (EEC), but she points out that the event is a true collaborative effort, with numerous local businesses and other organizations taking part. “They are terrific corporate citizens, and we have a really great combination of partners,” she says. Born and raised in Northside St. Louis City, Nicole was aware of SLATE and wanted the agency to participate in Hack4Hope, but was introduced to our Young Adult Workforce Division Manager, Dr. Alice Prince, in a somewhat unusual manner. By coincidence, Nicole’s 3

mother, a church musician, attends services with SLATE’s Adult Workforce Division Manager, Alice Prince, and made the introduction. More information on Hack4Hope can be found at http:// www.hack4hope.org/.

facilitate the Fair. Business Development Manager Bonnie Forker and her entire team were on hand to assist with set-up, answer questions and help both employers and attendees navigate the event. “This is one of the biggest and most exciting opportunities for those seeking employment anywhere in the St. Louis region,” said Bonnie. “SLATE has been involved over the last several years and we will do everything we can to make sure it continues to be successful.” Frank Alaniz, SLATE’s Regional Liaison, made a special presentation providing insights into the 21st century online job application

A Retirement party SLATE thanks Thelma Clifton, who announced her retirement from the Adult Education & Literacy Department at SLPS, for helping hundreds of adult customers obtain educational credentials. Thelma plans on dedicating her retirement years to friends and family. We wish Thelma a happy retirement.