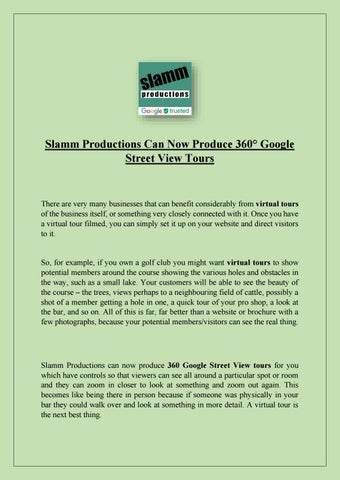 There are very many businesses that can benefit considerably from virtual tours of the business itself, or something very closely connected with it. Once you have a virtual tour filmed, you can simply set it up on your website and direct visitors to it.

So, for example, if you own a golf club you might want virtual tours to show potential members around the course showing the various holes and obstacles in the way, such as a small lake. Your customers will be able to see the beauty of the course â&#x20AC;&#x201C; the trees, views perhaps to a neighbouring field of cattle, possibly a shot of a member getting a hole in one, a quick tour of your pro shop, a look at the bar, and so on. All of this is far, far better than a website or brochure with a few photographs, because your potential members/visitors can see the real thing.

Slamm Productions can now produce 360 Google Street View tours for you which have controls so that viewers can see all around a particular spot or room and they can zoom in closer to look at something and zoom out again. This becomes like being there in person because if someone was physically in your bar they could walk over and look at something in more detail. A virtual tour is the next best thing.

A viewer could be on the other side of the Atlantic and have plans to visit the UK and play golf. You can show him a few photos on your website, or you can have a 360 tour. Not only does such a tour produce a much better view of your club, but it gets the viewer involved. He or she is taking part in some action on your website rather than just sitting looking at it and reading some words.

If a viewer is looking at a number of golf club websites with the object of choosing some at which to play, he is far more likely to choose one with which he has got involved rather than one which just has photos.

About The Company: Slamm Productions is a producer of corporate videos, sales videos, product videos, tv commercials, and much more, including virtual tours which give a viewer a much better picture of your business. Slamm Productions 37 Rosecroft Gardens Twickenham 020 8894 3000 Greater London, England, U.K robert@slamm.co.uk http://www.slamm.co.uk