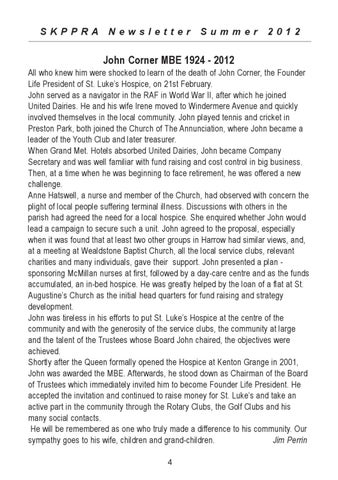 John Corner MBE 1924 - 2012 All who knew him were shocked to learn of the death of John Corner, the Founder Life President of St. Luke’s Hospice, on 21st February. John served as a navigator in the RAF in World War II, after which he joined United Dairies. He and his wife Irene moved to Windermere Avenue and quickly involved themselves in the local community. John played tennis and cricket in Preston Park, both joined the Church of The Annunciation, where John became a leader of the Youth Club and later treasurer. When Grand Met. Hotels absorbed United Dairies, John became Company Secretary and was well familiar with fund raising and cost control in big business. Then, at a time when he was beginning to face retirement, he was offered a new challenge. Anne Hatswell, a nurse and member of the Church, had observed with concern the plight of local people suffering terminal illness. Discussions with others in the parish had agreed the need for a local hospice. She enquired whether John would lead a campaign to secure such a unit. John agreed to the proposal, especially when it was found that at least two other groups in Harrow had similar views, and, at a meeting at Wealdstone Baptist Church, all the local service clubs, relevant charities and many individuals, gave their support. John presented a plan sponsoring McMillan nurses at first, followed by a day-care centre and as the funds accumulated, an in-bed hospice. He was greatly helped by the loan of a flat at St. Augustine’s Church as the initial head quarters for fund raising and strategy development. John was tireless in his efforts to put St. Luke’s Hospice at the centre of the community and with the generosity of the service clubs, the community at large and the talent of the Trustees whose Board John chaired, the objectives were achieved. Shortly after the Queen formally opened the Hospice at Kenton Grange in 2001, John was awarded the MBE. Afterwards, he stood down as Chairman of the Board of Trustees which immediately invited him to become Founder Life President. He accepted the invitation and continued to raise money for St. Luke’s and take an active part in the community through the Rotary Clubs, the Golf Clubs and his many social contacts. He will be remembered as one who truly made a difference to his community. Our sympathy goes to his wife, children and grand-children. Jim Perrin 4