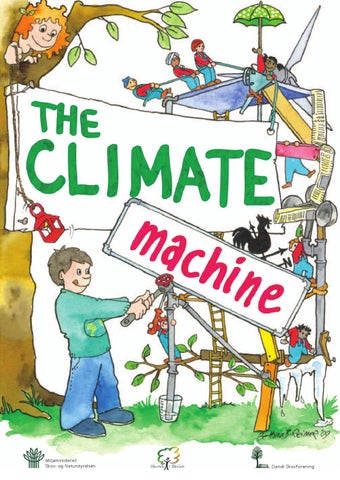 What is climate? You always know what the weather is like. Just look out of the window. The climate is how the weather behaves over a period of time e.g. 20-30 years.

“Everyone says, the climate is changing,” says Robert to himself. “There is too much CO2 in the air. They say they will do something about it. So will I.” Wilma-the-wisp sits up in a tree. Robert has not discovered her, so he cannot see, that she is smiling. But she is.

“CO2 is invisible,” says Robert. “But it is in the air. And there is too much of it. Maybe I can catch it with a machine. A vacuum cleaner with a filter? Yes. It must be tested. I will invent a climate machine. “ Wilma-the-wisp shakes her head.

CO -greenhouse ² Our climate is changing. The last 100 years, we have used so much coal, oil and gas that there is now too much CO in the ² air. The CO lies like a layer of gas around the Earth. It acts ² like the glass in a greenhouse. The beams of the sun penetrate the CO -layer and heat up the Earth - but the heat has ² difficulty getting out again. This is the reason why it becomes warmer on Earth. 4

Robert says: “If it gets warmer, one might need to sit in the shade. I need some parasols on my climate machine.”

The Earth is getting warmer. That will be of great influence to us. The ice at the poles has already begun to melt. Soon, the oceans will begin to rise and flood the lowlands all over the world. The weather will change throughout the world. Some places will have more storms and more rain. Sahara and other deserts will grow larger. But there a things we can do to prevent it – a lot of things. And the sooner we get started the better.

Measure temperature Check whether there is a difference in temperature between the inside of a forest and a green field. You need a thermometer. Check the temperature at different times of the day and write your measurements into a table. Remember, the thermometer should be placed in the shadow.

Robert looks up into the air: “They say the weather will become windier. I certainly won’t let my machine blow away. I will fasten it firmly to the ground.”

Measure wind Look up. The wind moves flags and smoke. It creates waves in the sea and shakes the branches of trees. You can use the form here to see how much the wind blows.

More storms When it gets warmer, we will have many more storms and hurricanes. This means that we must build stronger buildings. And we will need shelter.

Measure humidity Make your own moisture meter. You need a cone. When it is very humid, the cone closes - and when it gets dry it opens itself so that it can spread its seeds.

Measure rain You can make your own rain meter and measure how much it rains in different kinds of forests and in a field. Measure every day and write your measurements into a table. If the bottom of the bottle curves, pour a little water into it and start zero-point higher up.

Robert thinks for a moment. Something is still missing. â&#x20AC;&#x153;If a lot more rain than now is going to fall, we need to get rid of the water. Maybe I can connect a water pump to the machine.

Robert is satisfied. “Now I only need to start the machine. Then the climate will get better. “ But something is very wrong. The climate does not improve. Instead the machine explodes When the smoke has vanished, Robert discovers the tree in which Wilma-the-wisp is sitting. And he hears a voice saying: “The invention has already been invented.” Now he sees Wilma-the-wisp. “Who are you?” She points to herself. “Me? I am clever. Why don’t you listen to me? “ “But you haven’t said anything,” says Robert. “Then you should listen more closely,” said Wilma. “The climate machine has already been invented. This is it.” “But that’s just a tree,” says Robert. “Exactly. Do you want to visit my cave?” “Yes please,” Robert reply.

Wilma-the-wisp lives in a cave under the tree. “I know everything about trees,” she says. “Look. When the tree grows, it takes CO2 from the air. The CO2 sort of crawls into the tree and there it becomes wood. The tree – a climate machine. Trees take CO2 from the air. This is what happens:

When it is daylight, the leaves catch CO2 from the air. Inside the leaves the CO2 is tied together with water and transformed into a sugar called glucose. The sugar is then made into wood, branches, leaves, fruits and roots by the tree.

Wilma-the-wisp says: “It is better to build houses of wood, than of concrete.” “Why is that?” Robert asks. “Because the wood holds on to CO2. The CO2 stays inside the planks.” “Oh, I see,” Robert says. “It is better, that the CO2 is in the planks, than in the air?” “Yes.”

Use wood instead of concrete If you build your house out of wood, you will save CO2 twice. First of all, you keep the CO2 in the wood. And secondly: When you make concrete, you use energy and release CO2. This CO2 you avoid releasing, when you build with wood. Why does it help the climate to use wood? While a tree is growing, it absorbs more and more CO2 from the air, and stores it in the wood. When an old tree dies and lies rotting in a forest, the CO2 will be released into the air again. But if the tree is cut down, when it is fully grown – and cut into planks, the CO2 will stay in the wood. Of course this implies, that the forest is replanted and grown sustainable.

“Let’s go and plant trees,” Robert says. “That’s exactly what we are going to do,” says Wilma-the-wisp.

Wilma-the-wisp takes an acorn out of her pocket. “To build a Climate Machine is the easiest thing in the world to do. Look.” She kneels down and puts the acorn into the ground. “Like that,” she says. “That’s it. What are we going to do now?” “We are going to plant more trees,” Robert says. Wilma smiles. “How clever you are, Robert.” “Yeah,” he says. “I am too polite to contradict you.”

Sow trees Inside a seed a tree is waiting to get out. Acorn, chestnut, beechnuts and seeds from spruce are easy to sow in a flowerpot – or outside. Remember to water. When the seed is germinating, it first puts out the roots, and then the top.

If you want to plant a tree, so that it grows well, you have to dig a hole in the ground. Look at your tree and find out what is the top and what is the root, so that you turn the tree the right way. By looking at the bark you can see how deep into the ground the tree was standing earlier. Plant it in the same depth. Put all the roots into the hole and cover gently with soil. Stamp the soil around the tree. Weed around your tree, and take good care of it.

In a forest the difference between summer and winter is smaller than out in the open countryside. The difference in temperature between day and night is also smaller. This is because the trees are like a blanket. They hold on to the warmth and the humidity – and they prevent the wind from tearing through the forest. This is the reason why so many animals and plants like to live in the forest.

Look into a seed

If you cut a seed in two lengthwise, you can examine, what it is made of. See if you can find: • •

A seedling. This will turn into both the root and top of the tree. Seed leaves with starch – this is the lunch box of the seedling.

Draw what you can see.

“It is good to use wood,” Wilma says. “But it is even better to plant more trees. A lot of trees. That’s what we Wilmathe-wisps think.”

Lots of forests Around the world there are a lot of different forests, for instance rainforests, coniferous forests and mist forests. They are all important, both to the different animals and plants that live in them, and to our climate.

“Okay. That’s that,” Robert says and turns to his new friend. “Now we have finished”. “Yes,” says Wilma. “Now we could mail all the other things that people should do.” “All the other things? What do you mean?” “I mean for instance… … build windmills and sun panels, make wave energy and biogas, … use bikes, drive less in cars and invent electrical cars, that don’t create so much CO2 to the air, use the trains and the busses – and fly less, … hang out our laundry, put saving bulbs in the lamps, isolate the houses, eat less meat, … invent new things: the parabolic cooker, the sun shower, the bicycle reading lamp, … sit in a tree in the forest and do nothing.” “Okay, let´s do it,” Robert says. “Hey! Could we be friends?” “Friends? We already are,” answers Wilma. Robert laughs. “Well yes… yes we are.” Children Booklet. Rasmus decides to build a climate machine. It's not as easy as he expects, but fortunately he encounters Wilma-the-wisp wh...

Children Booklet. Rasmus decides to build a climate machine. It's not as easy as he expects, but fortunately he encounters Wilma-the-wisp wh...