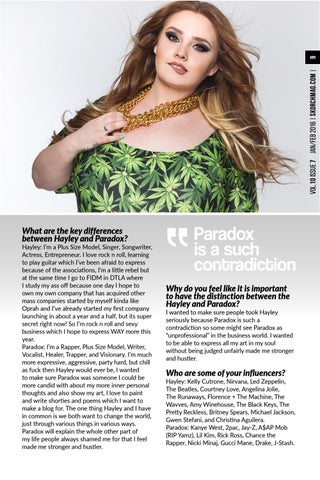 What are the key differences between Hayley and Paradox?

Hayley: I’m a Plus Size Model, Singer, Songwriter, Actress, Entrepreneur. I love rock n roll, learning to play guitar which I’ve been afraid to express because of the associations, I’m a little rebel but at the same time I go to FIDM in DTLA where I study my ass off because one day I hope to own my own company that has acquired other mass companies started by myself kinda like Oprah and I’ve already started my first company launching in about a year and a half, but its super secret right now! So I’m rock n roll and sexy business which I hope to express WAY more this year. Paradox: I’m a Rapper, Plus Size Model, Writer, Vocalist, Healer, Trapper, and Visionary. I’m much more expressive, aggressive, party hard, but chill as fuck then Hayley would ever be, I wanted to make sure Paradox was someone I could be more candid with about my more inner personal thoughts and also show my art, I love to paint and write shorties and poems which I want to make a blog for. The one thing Hayley and I have in common is we both want to change the world, just through various things in various ways. Paradox will explain the whole other part of my life people always shamed me for that I feel made me stronger and hustler.

Paradox is a such contradiction

Why do you feel like it is important to have the distinction between the Hayley and Paradox?

I wanted to make sure people took Hayley seriously because Paradox is such a contradiction so some might see Paradox as “unprofessional” in the business world. I wanted to be able to express all my art in my soul without being judged unfairly made me stronger and hustler.

Who are some of your influencers? 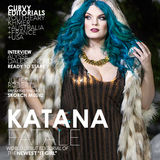