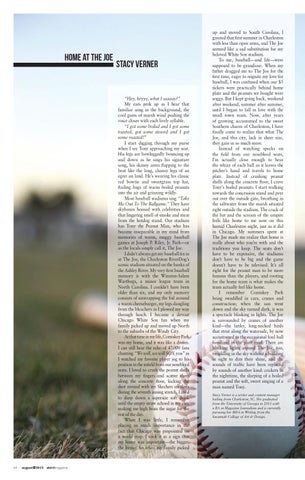 Home At The Joe

“Hey, heyyy, what I saaaay?” My ears perk up as I hear that familiar song in the background, the cool gusts of marsh wind pushing the voice closer with each lively syllable. “I got some boiled and I got some toasted, got some stewed and I got some roasted!” I start digging through my purse when I see Tony approaching my seat. His legs are bowleggedly bouncing up and down as he sings his signature song, his skinny arms flapping to the beat like the long, clumsy legs of an egret on land. He’s wearing his classic red bowtie and sweetgrass top hat, flailing bags of warm boiled peanuts into the air and grinning wildly. Most baseball stadiums sing “Take Me Out To The Ballgame.” They have skyboxes housed with celebrities and that lingering smell of smoke and meat from the hotdog stand. Our stadium has Tony the Peanut Man, who has become inseparable in my mind from memories of warm, muggy baseball games at Joseph P. Riley, Jr. Park—or as the locals simply call it, The Joe. I didn’t always get my baseball fix in at The Joe, the Charleston RiverDog’s scenic stadium situated on the banks of the Ashley River. My very first baseball memory is with the Winston-Salem Warthogs, a minor league team in North Carolina. I couldn’t have been older than six, and my only memory consists of unwrapping the foil around a warm cheeseburger, my legs dangling from the bleachers as I plowed my way through lunch. I became a devout Chicago White Sox fan when my family picked up and moved up North to the suburbs of the Windy City. At that time in my life, Comiskey Park was my home, and it was like a dream. I can still hear the echo of 47,000 fans chanting “We will, we will SOX you” as I watched my favorite player jog to his position in the infield from our nosebleed seats. I loved to crush the peanut shells between my fingers and scatter them along the concrete floor, kicking the dust around with my Skechers sneakers during the seventh inning stretch. I used to slurp down a supersize soft drink until the empty straw echoed in my cup, making me high from the sugar for the rest of the day. When I was little, I remember placing so much importance in the fact that Chicago was pinpointed on a world map. I took it as a sign that my home was important—the bigger, the better. So when my family picked

up and moved to South Carolina, I greeted that first summer in Charleston with less than open arms, and The Joe seemed like a sad substitution for my beloved White Sox stadium. To me, baseball—and life—were supposed to be grandiose. When my father dragged me to The Joe for the first time, eager to reignite my love for baseball, I was confused when our $5 tickets were practically behind home plate and the peanuts we bought were soggy. But I kept going back, weekend after weekend, summer after summer, until I began to fall in love with the small town team. Now, after years of growing accustomed to the sweet Southern charm of Charleston, I have finally come to realize that what The Joe, and this city, lack in sheer size, they gain in so much more. Instead of watching specks on the field from our nosebleed seats, I’m actually close enough to hear the whizz of each ball as it leaves the pitcher’s hand and travels to home plate. Instead of crushing peanut shells along the concrete floor, I crave Tony’s boiled peanuts. I start walking towards the concession stand and peer out over the outside gate, breathing in the saltwater from the marsh situated right outside the stadium. The crack of the bat and the scream of the umpire feels like home to me now on this humid Charleston night, just as it did in Chicago. My summers spent at The Joe made me realize that home is really about who you’re with and the traditions you keep. The seats don’t have to be expensive, the stadiums don’t have to be big and the game doesn’t have to be televised. It’s all right for the peanut man to be more famous than the players, and rooting for the home team is what makes the team actually feel like home. I remember Comiskey Park being swaddled in cars, cranes and construction; when the sun went down and the sky turned dark, it was a spectacle blinking in lights. The Joe is surrounded by cranes of another kind—the lanky, long-necked birds that strut along the waterside, by now accustomed to the occasional foul ball fossilized in the pluff mud. There are blinking lights around The Joe, too, twinkling in the sky without a building in sight to dim their shine, and the sounds of traffic have been replaced by sounds of another kind: crickets in the nighttime, the slurping of a boiled peanut and the soft, sweet singing of a man named Tony. Stacy Verner is a writer and content manager hailing from Charleston, SC. She graduated from the University of Georgia in 2013 with a BA in Magazine Journalism and is currently pursuing her MFA in Writing from the Savannah College of Art & Design. 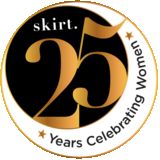