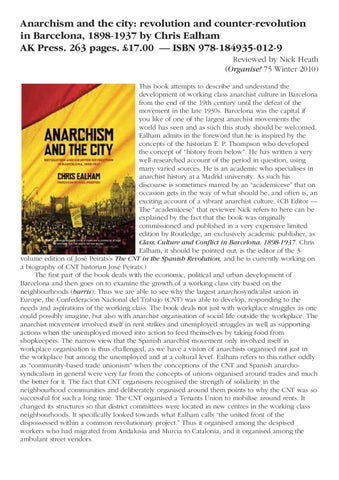 Anarchism and the city: revolution and counter-revolution in Barcelona, 1898-1937 by Chris Ealham AK Press. 263 pages. £17.00 — ISBN 978-184935-012-9 Reviewed by Nick Heath (Organise! 75 Winter 2010) This book attempts to describe and understand the development of working class anarchist culture in Barcelona from the end of the 19th century until the defeat of the movement in the late 1930s. Barcelona was the capital if you like of one of the largest anarchist movements the world has seen and as such this study should be welcomed. Ealham admits in the foreword that he is inspired by the concepts of the historian E. P. Thompson who developed the concept of “history from below”. He has written a very well-researched account of the period in question, using many varied sources. He is an academic who specialises in anarchist history at a Madrid university. As such his discourse is sometimes marred by an “academicese” that on occasion gets in the way of what should be, and often is, an exciting account of a vibrant anarchist culture. (CB Editor — The “academicese” that reviewer Nick refers to here can be explained by the fact that the book was originally commissioned and published in a very expensive limited edition by Routledge, an exclusively academic publisher, as Class, Culture and Conflict in Barcelona, 1898-1937. Chris Ealham, it should be pointed out, is the editor of the 3volume edition of José Peirats’s The CNT in the Spanish Revolution, and he is currently working on a biography of CNT historian José Peirats.) The first part of the book deals with the economic, political and urban development of Barcelona and then goes on to examine the growth of a working class city based on the neighbourhoods (barris). Thus we are able to see why the largest anarchosyndicalist union in Europe, the Confederacion Nacional del Trabajo (CNT) was able to develop, responding to the needs and aspirations of the working class. The book deals not just with workplace struggles as one could possibly imagine, but also with anarchist organisation of social life outside the workplace. The anarchist movement involved itself in rent strikes and unemployed struggles as well as supporting actions when the unemployed moved into action to feed themselves by taking food from shopkeepers. The narrow view that the Spanish anarchist movement only involved itself in workplace organisation is thus challenged, as we have a vision of anarchists organised not just in the workplace but among the unemployed and at a cultural level. Ealham refers to this rather oddly as “community-based trade unionism” when the conceptions of the CNT and Spanish anarchosyndicalism in general were very far from the concepts of unions organised around trades and much the better for it. The fact that CNT organisers recognised the strength of solidarity in the neighbourhood communities and deliberately organised around them points to why the CNT was so successful for such a long time. The CNT organised a Tenants Union to mobilise around rents. It changed its structures so that district committees were located in new centres in the working class neighbourhoods. It specifically looked towards what Ealham calls “the united front of the dispossessed within a common revolutionary project.” Thus it organised among the despised workers who had migrated from Andalusia and Murcia to Catalonia, and it organised among the ambulant street vendors.

Libraries Alongside this was the creation of the athenaeums (ateneos in Spanish, ateneus in Catalan). These were social and cultural centres which fulfilled a real need in the working class neighbourhoods. The larger ones housed a cooperative shop with food at lower prices. They organised theatre, musical and choral groups at a time when it was difficult to find affordable forms of leisure. There was an anti-capitalist content in these activities, particularly with the plays that were put on at the ateneus. There were also the hiking, rambling and camping activities organised by various clubs. At the same time these excursions into the countryside not only contributed to workers health and fitness but provided them with opportunities to discuss ideas and writings away from State surveillance. Each ateneo prided itself on its lending library, filled with all sorts of progressive books. In addition, there were reading rooms, rooms for discussions and talks, as well as cafes. There were day schools for working class children and evening classes for workers. Alongside these educational ventures in the ateneus was the creation of rationalist schools, based on the principles of the libertarian educationalist Francisco Ferrer. These inspired equality and spontaneity of expression within the classroom. Both the ateneus and the schools were based solidly in the neighbourhoods. Crèche facilities were provided in the ateneus, as well as specific youth sections. As Ealham notes: “Nor was the CNT weakened by generational divisions or by a rival youth culture… The unions drew life from the kinship networks in the barris, successfully incorporating young workers into their ranks, many of whom were frequently attracted to the unions by family members, principally fathers and brothers and other powerful male role models, such as uncles”. Women Here Ealham correctly points out one of the flaws in CNT strategy. As he says the “dissident potential” of women workers was “not always maximised”. Women tended to play a secondary and supportive role within the CNT, even within the textile unions, where many women were employed. This was also seen in the ateneus where “patterns of gender discrimination …were replicated in the more ideological and politicised spaces of the ateneus and the anarchist groups that operated within them. Signalling the failure of alternative culture to break completely with official culture, women were frequently restricted to offering moral and material support for the masculine group, finding meeting places and offering logistical support; on excursions, women were predominantly involved in tasks of food preparation!”. Importantly, the radical wing of the anarchist movement is investigated in some detail. This wing is best symbolised in the figures of the legendary Durruti and Ascaso, and it engaged in deeds of direct action, including attacks on particularly repressive representatives of the ruling class, as well as acts of expropriation to finance the movement, including bank robbery. This wing itself had a radicalising effect on the CNT and the entirety of the libertarian movement. This led on to the insurrections of 1932-33 and splits within the CNT as the radical wing sought to silence or neutralise other militants who disagreed with these tactics. As state repression increased, the groups of the radical wing of the movement organised within and outside the Federación Anarquista Ibérica (Iberian Anarchist Federation or FAI) became bolder in their attacks on the State. At the same time those moderates within the CNT opposed to the tactics of the radicals accused the FAI of being responsible for the street violence rather than criticise the Republic of 1930-33 for failing to deliver its promised package of reforms. Repression showed that the moderates were naïve in thinking that these reforms were at all possible and that the CNT could expand freely in this period. This undermined the moderates and strengthened the hand of the radicals. The moderates failed to develop a strategy for the unemployed, sometimes moving towards advocating measures like excluding women from the workplace and immigration controls on workers from Andalucía and Murcia! Repression At the same time repression meant that the struggles lost their mass form and moved to small-group resistance in the streets. The FAI, for all their daring actions, would rather see the unemployed unorganised than fall under the influence of other currents within the CNT, with meetings disrupted

by armed anarchists. Not only did the radicals not look to broad unity within the working class, they increasingly believed they could make the revolution themselves. This attitude eventually led to the ‘cycle of insurrections’ which revealed what Ealham calls an “absence of a coherent spatial dimension”. This appears to mean that the FAI was not sufficiently prepared with enough arms and ammunition to successfully carry out insurrections, and could not go beyond local actions to more offensive actions at a regional and State level. They failed to use the strength of the neighbourhoods, and failed to link their armed actions with general strikes and mass mobilisations. The actions led to increased repression and the closing down of ateneus, schools and CNT centres. This suited the FAI which believed that the worse the situation became, the quicker the social revolution would arrive. But moral panics were launched by the press against the last bastions of libertarian organisation, the hiking clubs! The Catalan socialists saw the most “pressing problem” as the elimination of the FAI using “all means possible, without hesitation, without pity and without reservations”. Within the FAI itself criticisms of the insurrectionary strategy came to the surface after the abortive January 1933 rising, arguing instead for education and mass revolution. The final section ends with the achievements of the libertarian revolution in Barcelona, its limitations, including the old problems of the marginalisation of women, and its undermining by the bourgeois republicans and their Stalinist allies. The May Days of 1937 when Barcelona workers resisted Republican-Stalinist provocation and were defeated was a serious blow for the libertarian workers movement. As Ealham says: “the power of the barris, like the revolution, was at an end”. 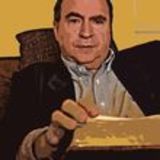 Review of Anarchism and the City by Chris Ealham

Review of Anarchism and the City by Chris Ealham