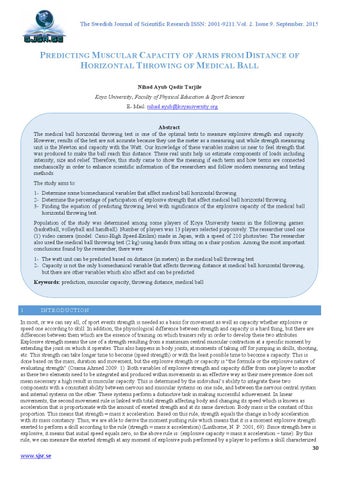 In most, or we can say all, of sport events strength is needed as a basis for movement as well as capacity whether explosive or speed one according to skill. In addition, the physiological difference between strength and capacity is a hard thing, but there are differences between them which are the essence of training on which trainers rely in order to develop these two attributes. Explosive strength means the use of a strength resulting from a maximum central muscular contraction at a specific moment by extending the joint on which it operates. This also happens in body joints, at moments of taking off for jumping in skills, shooting, etc. This strength can take longer time to become (speed strength) or with the least possible time to become a capacity. This is done based on the mass, duration and movement, but the explosive strength or capacity is “the formula or the explosive nature of evaluating strength” (Osama Ahmed 2009: 1). Both variables of explosive strength and capacity differ from one player to another as these two elements need to be integrated and produced within movements in an effective way as their mere presence does not mean necessary a high result in muscular capacity. This is determined by the individual’s ability to integrate these two components with a consistent ability between nervous and muscular systems on one side, and between the nervous central system and internal systems on the other. These systems perform a distinctive task in making successful achievement. In linear movements, the second movement rule is linked with total strength affecting body and changing its speed which is known as acceleration that is proportionate with the amount of exerted strength and at its same direction. Body mass is the constant of this proportion. This means that strength = mass x acceleration. Based on this rule, strength equals the change in body acceleration with its mass constancy. Thus, we are able to derive the moment pushing rule which means that it is a moment explosive strength exerted to perform a skill according to the rule (strength = mass x acceleration) (Linthorne, N. P. 2001, 69). Since strength here is explosive, it means that initial speed equals zero, so the above rule is: (explosive capacity = mass x acceleration ÷ time). By this rule, we can measure the exerted strength at any moment of explosive push performed by a player to perform a skill characterized

The Swedish Journal of Scientific Research ISSN: 2001-9211.Vol. 2. Issue 9. September. 2015 by explosive strength. Through the first rule of Newton, movement production is a result of strength as “strength is a mechanical act that changes, attempts or maintains the shape of motor body condition” (Kasem & Eman 1998: 237). Capacity forms when the time of muscle contraction is short. This means using the biggest motor unit in order to reduce time. Therefore, capacity is defined by (Hara) as “the ability of one or group of muscles to reach frequency in the least possible time and it is called speed strength” (Mohamed Sobhy & Ahmed Kesra 1998, 103) and this means that capacity includes important factors which are strength and motor speed. The capacity rule is (capacity = strength x speed). As previously mentioned, this means that capacity is affected by strength and speed as it increases by the increase of any one of them. Thus, relation between strength and speed in this rule is an inverse relation. This classic relation between strength and speed was firstly determined by Hill, 1938. Muscle contraction speed has a notable and clear effect on muscles’ capacity to generate strength. In addition, the type of muscle contraction plays a great role in this respect. During concentric contraction, in which muscles are shortened, maximum strength is reduced gradually with increased speed, while the opposite is correct during eccentric contraction as strength increases with speed increase when operating muscles are extended. Therefore, in most studies and researches in the field of sport education, the used tests for measuring strength depend on jumping distance or medical ball throwing without depending on mechanical bases which may affect performance outcome. Hence, the importance of the study comes in predicting the explosive capacity of arms with significance of distance through horizontal medical ball throwing. Problem of the Study Through surveying, there is many scientific problems in sports which need to be studied and examined to set scientific solutions for them and employ results of these studies to serve the sport achievement. One of the problems that are seen by the researcher is the problem of studying explosive strength and capacity in the test used a decade ago which is the arms explosive strength and capacity test due to distance and measuring, in the same test, the mass and movement duration. This is done without considering the nature of morphological differences between the examined and the possibility of their effect results of tests. Through reviewing references and researches, the researcher did not find a study tackling photography based on mechanical rules which made him perform an analytical study using photography, biomechanical analysis and attempting to adjust outsider factors. Therefore, the problem of the study can be summed in the inaccurate results of the test because it uses the meter as a measuring unit, while strength is measured by Newton, capacity by Watt and our knowledge of these variables makes us close to feel real strength that is used for ball pushing. Goals of the Study: 1- Determine some biomechanical variables that affect medical ball horizontal throwing. 2- Determine the percentage of participation of explosive strength that affect medical ball horizontal throwing. 3- Finding the equation of predicting throwing level with significance of the explosive capacity of the medical ball horizontal throwing. Hypotheses of the Study: 1- The explosive capacity of arms can be predicted based on distance through horizontal medical ball throwing. 2.

The researcher used the descriptive method as it is proper to the nature of the problem. Population & Sample of the Study: Population of the study was determined from some players of Koya University teams in the following games: (basketball, volleyball and handball). Number of players was 13 players selected purposively. Numbers of observations were determined (39 observations) at individuals’ number and sample for the purpose of statistical analysis of biomechanical variables. Tests & Measurements of the Study: Arm’s Explosive Capacity Test (Ali Salloum 2004, 94) Biomechanical Variables: Through (Kinovea) analysis program, variables under study were counted from chest to after releasing the ball and counting both speed and acceleration, and then from the below rules strength and capacity were obtained. Ball mass (2 kg) and arms mass is (9.8 kg) so mass will be (11.8 kg). In addition:

Figure (1): Measuring Photography: The researcher used video photography (figure 2) as it is one of the means of observing errors and how training reaches the most accurate moves and their goals.

Figure (2): Photography & Examination The researcher used one (1) video camera (model: Casio-High Speed-Exilim) made in Japan, with a speed of (210-420-1000 photos/sec). Its speed can be controlled due to the studied movement speed. The researcher depended on the (210 photos/sec) speed. This camera can directly store the movement in the (Memori) and installed on a (Tripod) vertically in a distance of (2.45 m) away from the point at the centre of the player’s movement in the left side. Height of its lens is 110 cm from the ground. The scale was photographed after putting at the centre of the place of performance horizontally with a length of 1 m with black and white colours. Photography was performed in the internal hall related to the Sport Education School / Koya University on 02/02/2014 corresponding Sunday at 1 pm with the help of the work team. Calculator’s Accounting and Analysis In order to get accurate analysis results, the researcher had to use a developed calculator with a high degree of speed and accuracy as biomechanical analysis depends on goals related to the skill which needs to be studied (one of the first steps of biomechanical analysis is to determine the main goal of the motor skill or what is called mechanical goal of the skill. “Without clarity and goal detection we cannot evaluate the effectiveness of skill performance” (Talha Hossameldin 1994, 25). After many previous surveys, all attempts were selected. One of the most important basic requirements to extract results is conducting analysis and evaluation of the research’s sample. In order to treat these mistakes, they must be diagnosed which is the core of the problem.

Figure (3) diagram of capacity prediction by distance Result shows that arms capacity contributes greatly. The researcher found that this is a proof that the equation is valid in predicting arms’ capacity through distance. However, absence of contributing percentage is an important proof that there are other biomechanical variables that influence and contribute during measuring explosive capacity of arms in medical ball horizontal throwing (medical ball pushing). These variables include pushing angle, duration and gravity. In addition, anthropometric variables have their percentages in terms of arms length and periphery. Thus, the researcher explains this result due to contribution of these variables too but with small percentages. Through this presentation, the researcher found that arms’ ability affects the distance of throwing for medical ball horizontal throwing. Further, the nature of the correlation was detected between this index and its percentage of contribution in medical ball horizontal throwing distance in addition to detection of prediction skewness line equation with significance of values of the biomechanical variable (strength and capacity) that affect the distance in this test.

The Swedish Journal of Scientific Research ISSN: 2001-9211.Vol. 2. Issue 9. September. 2015 4. C ONCLUSIONS : 1- The watt unit can be predicted based on distance (in meters) in the medical ball throwing test. 2- Capacity is not the only biomechanical variable that affects throwing distance at medical ball horizontal throwing, but there are other variables which also affect and can be predicted. 5. R EFERENCES - 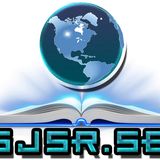