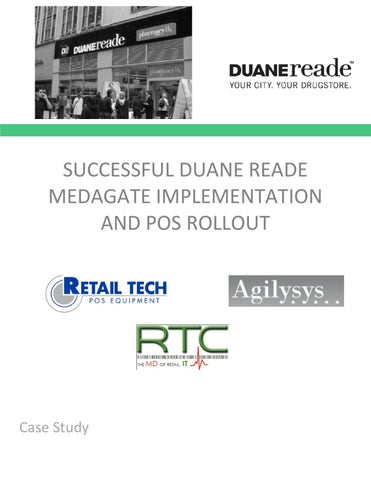 THE COMPANY Duane Reade is a drug store chain with its corporate offices located in mid town Manhattan, NY and operating over 250 stores throughout the five New York boroughs and several in New Jersey. The company has ranked as the fastest-

growing drugstore chain in the industry, and is number one in sales per square foot.

THE PROBLEM: Duane Reade undertook an initiative to implement the governmentâ&amp;#x20AC;&amp;#x2122;s Medagate program into their stores in only 60 days. This initiative meant they would be one of the first of only 2 drug store chains in the country to accept re-loadable OTC cards from Medicare Advantage plans. In addition to the short time frame, Duane Reade was currently in the midst of a major Point-of-Sale (POS) rollout, with 82 stores remaining. In order to begin accepting the cards chain wide, the StoreMS POS platform needed to be rolled out in the remaining 82 stores, and the Medagate code had to be installed in another 175 stores-- in only 59 days.

THE PROJECT RTC, Agilysys, and Retail Tech were hired by Duane Reade to convert approximately 82 Duane Reade stores from IBM’s Chain Sales POS to RTC’s StoreMS POS. RTC had already installed StoreMS POS in 80 stores at the start of the project. The project entailed replacing IBM’s 4690 platform, which consisted of PC servers and 4693 registers running on IBM’s 4690 OS, with IBM SurePOS 741 registers, IBM xSeries store servers, as well as new POS scanners and PIN Pads. Agilysys and Retail Tech worked in concert to provide both new and refurbished POS hardware, implementation services and the integration services for the rollout. Agilysys has been Duane Reade’s provider for procurement, integration and implementation for well over a decade. The plan was for RTC to provide the StoreMS POS software, to Agilysys and Retail Tech who would load the software on the machines, test the machines and ship entirely pre-staged stores to the sites for installation. Because of the tight schedule, RTC provided an on-site project manager at Retail Tech’s HQ in Minneapolis to assist in burning in and distributing all the registers needed for the roll out. Further, RTC provided systems installation resources to assist Duane Reade in rolling out those stores.

CHALLENGES The biggest challenge facing the project was the lack of time to acquire the necessary registers and refurbish them, load and burn in the software, and get the loaded registers to New York for installation. Further complicating the project was RTC’s requirement to develop the Medigate code, complete a quality assurance cycle, and integrate the new code into the existing Duane Reade production environment. The limited time frame and budget required an extensive overtime schedule for many RTC, Retail Tech and Agilysys employees. In addition, the hardware budget was extremely tight, requiring Agilysys and Retail Tech to utilize existing peripherals and leverage refurbished systems. In the end, all three companies overcame extreme adversity and succeeded on time and on budget.

BENEFITS ANALYSIS Agilysys and Retail Tech’s value add was specific to the acquisition of IBM SurePOS 741 series registers in the marketplace and then flipping those assets into refurbished gear fully integrated to the DR/RTC configuration for immediate installation into the DR stores. They were exceptional at doing this daunting task in as little as 6 weeks. RTC’s value ranged from software development and quality assurance of the final released products to overall project management of the entire effort in partnership with Duane Reade. RTC had the technical skills and the consulting/retail operations skills to insure the project not only was on schedule and budget, but also hit the business requirements with minimal redundant effort. This is a sign of exceptional project management.

THE TEAM RTC, RTI, Agilysys and Duane Reade worked the entire project as one entity. There were no lines between companies. It was the only way this project had a chance to succeed and it did with exceptional efforts by all members of the team. Each company brought their best resources to the table and managed the entire effort in complete harmony. It was truly a crowning achievement in retail technology. The professionalism at every level was also quite astounding.

“The three companies pulled together as a team and looked for solutions and workarounds rather than excuses and in the end we pulled off a miraculous rollout that went flawlessly.” –Tom Devine, Agilysys “In my 22 years working in the retail technology industry, I have never been involved with a project that compares either in scope or difficulty in such a short period of time.” –Bruce Hicks, President, RTC “&quot;Unbelievable...This is the only way to describe being part of such a great team that truly delivered a low cost, and integrated POS hardware and software solution in such a short time frame!”-Bob Spinner, Owner, Retail Tech 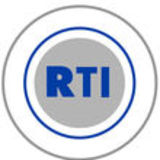