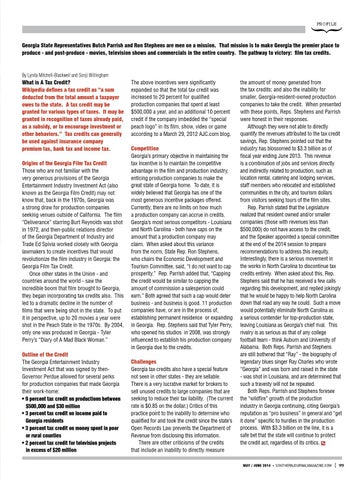 Georgia State Representatives Butch Parrish and Ron Stephens are men on a mission. That mission is to make Georgia the premier place to produce - and post-produce - movies, television shows and commercials in the entire country. The pathway to victory: film tax credits.

What is A Tax Credit? Wikipedia defines a tax credit as “a sum deducted from the total amount a taxpayer owes to the state. A tax credit may be granted for various types of taxes. It may be granted in recognition of taxes already paid, as a subsidy, or to encourage investment or other behaviors.” Tax credits can generally be used against insurance company premium tax, bank tax and income tax. Origins of the Georgia Film Tax Credit Those who are not familiar with the very generous provisions of the Georgia Entertainment Industry Investment Act (also known as the Georgia Film Credit) may not know that, back in the 1970s, Georgia was a strong draw for production companies seeking venues outside of California. The film “Deliverance” starring Burt Reynolds was shot in 1972, and then-public relations director of the Georgia Department of Industry and Trade Ed Spivia worked closely with Georgia lawmakers to create incentives that would revolutionize the film industry in Georgia: the Georgia Film Tax Credit. Once other states in the Union - and countries around the world - saw the incredible boom that film brought to Georgia, they began incorporating tax credits also. This led to a dramatic decline in the number of films that were being shot in the state. To put it in perspective, up to 20 movies a year were shot in the Peach State in the 1970s. By 2004, only one was produced in Georgia - Tyler Perry’s “Diary of A Mad Black Woman.” Outline of the Credit The Georgia Entertainment Industry Investment Act that was signed by thenGovernor Perdue allowed for several perks for production companies that made Georgia their work-home: • 9 percent tax credit on productions between $500,000 and $30 million • 3 percent tax credit on income paid to Georgia residents • 3 percent tax credit on money spent in poor or rural counties • 2 percent tax credit for television projects in excess of $20 million

The above incentives were significantly expanded so that the total tax credit was increased to 20 percent for qualified production companies that spent at least $500,000 a year, and an additional 10 percent credit if the company imbedded the “special peach logo” in its film, show, video or game according to a March 29, 2012 AJC.com blog. Competition Georgia’s primary objective in maintaining the tax incentive is to maintain the competitive advantage in the film and production industry, enticing production companies to make the great state of Georgia home. To date, it is widely believed that Georgia has one of the most generous incentive packages offered. Currently, there are no limits on how much a production company can accrue in credits. Georgia’s most serious competitors - Louisiana and North Carolina - both have caps on the amount that a production company may claim. When asked about this variance from the norm, State Rep. Ron Stephens, who chairs the Economic Development and Tourism Committee, said, “I do not want to cap prosperity.” Rep. Parrish added that, “Capping the credit would be similar to capping the amount of commission a salesperson could earn.” Both agreed that such a cap would deter business - and business is good. 11 production companies have, or are in the process of, establishing permanent residence or expanding in Georgia. Rep. Stephens said that Tyler Perry, who opened his studios in 2008, was strongly influenced to establish his production company in Georgia due to the credits. Challenges Georgia tax credits also have a special feature not seen in other states - they are sellable. There is a very lucrative market for brokers to sell unused credits to large companies that are seeking to reduce their tax liability. (The current rate is $0.85 on the dollar.) Critics of this practice point to the inability to determine who qualified for and took the credit since the state’s Open Records Law prevents the Department of Revenue from disclosing this information. There are other criticisms of the credits that include an inability to directly measure

the amount of money generated from the tax credits; and also the inability for smaller, Georgia-resident-owned production companies to take the credit. When presented with these points, Reps. Stephens and Parrish were honest in their responses. Although they were not able to directly quantify the revenues attributed to the tax credit savings, Rep. Stephens pointed out that the industry has blossomed to $3.3 billion as of fiscal year ending June 2013. This revenue is a combination of jobs and services directly and indirectly related to production, such as location rental, catering and lodging services, staff members who relocated and established communities in the city, and tourism dollars from visitors seeking tours of the film sites. Rep. Parrish stated that the Legislature realized that resident owned and/or smaller companies (those with revenues less than $500,000) do not have access to the credit, and the Speaker appointed a special committee at the end of the 2014 session to prepare recommendations to address this inequity. Interestingly, there is a serious movement in the works in North Carolina to discontinue tax credits entirely. When asked about this, Rep. Stephens said that he has received a few calls regarding this development, and replied jokingly that he would be happy to help North Carolina down that road any way he could. Such a move would potentially eliminate North Carolina as a serious contender for top-production state, leaving Louisiana as Georgia’s chief rival. This rivalry is as serious as that of any college football team - think Auburn and University of Alabama. Both Reps. Parrish and Stephens are still bothered that “Ray” - the biography of legendary blues singer Ray Charles who wrote “Georgia” and was born and raised in the state - was shot in Louisiana, and are determined that such a travesty will not be repeated. Both Reps. Parrish and Stephens foresee the “wildfire” growth of the production industry in Georgia continuing, citing Georgia’s reputation as “pro business” in general and “get it done” specific to hurdles in the production process. With $3.3 billion on the line, it is a safe bet that the state will continue to protect the credit act, regardless of its critics. 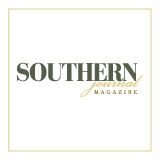