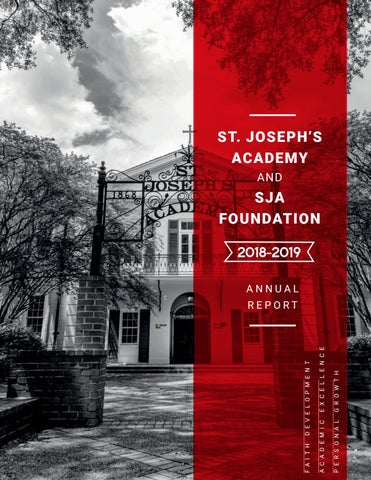 message from the president It was a special year at St. Joseph’s Academy. Throughout 2018-2019, we celebrated the 150th anniversary of our founding in 1868 by the Sisters of St. Joseph. A year’s worth of activities commemorated the milestone year, including the dedication and blessing of the new Academy Student Center; a mass of Thanksgiving to celebrate the 150th anniversary of the arrival of the Sisters in Baton Rouge; a Day of Service for students, alumnae, parents and friends; and an inspirational speaker series featuring Sister Helen Prejean (SJA class of 1957), best-selling author and leading advocate for the abolition of the death penalty; New York Times best-selling author Laura Schroff; Olympic gold-medal gymnast Mary Lou Retton; Dr. Allen Hunt, nationally acclaimed speaker and senior advisor at Dynamic Catholic Institute; and James Carville and Mary Matalin, the odd couple of American politics. The year culminated on April 27 with the 150th Anniversary Gala at Raising Cane’s River Center. The St. Joseph’s Academy community was guided throughout the year by the charism theme of Leadership: Weave One Heart. Students, faculty and staff were called to strive for excellence in all endeavors tempered by gentleness, joy and peace. SJA students contributed 57,785 hours of service to the dear neighbor during the 2018-2019 school year. One hundred-nineteen seniors dedicated 50 or more hours to service during each of their four years at SJA. The Academy was honored as the Outstanding Youth in Philanthropy Award winner by the Greater Baton Rouge Chapter of the Association of Fundraising Professionals. Nominated by Mary Bird Perkins Cancer Center, the Academy was recognized for its culture of service, particularly its annual Geaux Pink volleyball matches to raise funds to support breast cancer awareness and the local fight against the disease. SJA was also honored for its ongoing support of the Greater Baton Rouge Food Bank. Over the past three years, more than 76,000 pounds of food have been donated, providing the equivalent of 63,600 meals. As an expression of the charism of the Sisters of St. Joseph, the SJA educational experience emphasizes the importance of relationships with those who are less fortunate. The summer of 2019 saw nearly 200 Academy students immersed in volunteer work as they served the dear neighbor through mission trips at home and abroad. Service destinations included Klagetoh, Arizona; LaGrange Park, Illinois; San Isidro,

Costa Rica; Santurce, Puerto Rico; Louisville, Kentucky; Houston and Dallas, Texas; New Orleans, Louisiana; and at home in Baton Rouge. Of the 385 SJA students who took AP tests in the spring of 2019, 310 students (or 81 percent) scored at least a 3 or higher on one of the tests taken, thus earning college credit. SJA had a record 125 AP Scholar Award winners, including two National AP Scholars. Members of the class of 2019 were granted admission to 114 colleges and universities. Our 2019 graduates earned $26.2 million in scholarships. It was a banner year for SJA athletics. The swim team won its eighth consecutive Division I-Class 5A state championship, while the cross country team won its third consecutive Class 5A state championship. The track and field team made history by finishing second in the indoor state championship and winning the outdoor state championship for the first time ever. The gymnastics team finished first in the Allstate Sugar Bowl/LHSAA Gymnastics Championship. The tennis teams finished second in the state. The volleyball team advanced to the semifinal round of the state tournament, and the basketball team advanced to the semifinal round of the state playoffs for the first time in school history. The soccer and softball teams advanced to the quarterfinal rounds of their respective state tournaments. During 2018-2019, with the SJA Foundation’s assistance, SJA provided 137 students with assistance totaling $657,598. The SJA Foundation holds 65 scholarships, 55 of which are fully endowed. Scholarships are fully endowed and perpetual when they reach $40,000. We are pleased to announce that two new scholarships were established in 2018-2019. They are the Boyce-Dittmar Scholarship and the Mothers’ Club Scholarship. During 2018-2019, the Annual Fund campaign raised a record $523,912. We are grateful for the ongoing support of all those who believe in the transformative and unique power of an Academy education for the young women of Baton Rouge. As we end this milestone year in our beloved Academy’s rich history, we offer our sincere and humble thanks to you, our partners in mission. Each and every one of you is vital in our work to educate young women as responsible and unifying members of the world community. With appreciation,

MESSAGE FROM THE CHAIR OF THE SJA BOARD OF DIRECTORS It has been my pleasure and honor to serve as the chair of the St. Joseph’s Academy Board of Directors for the 2018-2019 school year. The primary responsibility of the SJA Board of Directors is to oversee the management of the Academy and to ensure its financial solvency. In addition, the Board is an active member of the community and participates in the Annual Fund, fundraising events, strategic planning, educational training, goal setting and, this year, celebrating the 150th anniversary of the Academy’s founding in 1868 by the Sisters of St. Joseph. Our 150th year began with the dedication of the Academy Student Center and continued through 2019 with many events for the students. We celebrated an anniversary Mass at St. Joseph’s Cathedral with the Sisters and ended our milestone year with the Gala on April 27 at the Raising Cane’s River Center. The busy year continued with the Board’s ongoing research and evaluation for a new three-year strategic plan to guide SJA into the future. The new plan will aid the Board in ensuring the mission of St. Joseph’s Academy is alive and active. We support the education of young women as responsible and unifying members of the world community. And, it is critical that we continue, in the spirit and charism of the Sisters of St. Joseph, to offer opportunities for faith development in the Catholic tradition, academic excellence and personal growth.

After an extensive constituency survey, focus groups and evaluation, we developed five strategic areas of focus: 1. Academic Excellence 2. Faith Development 3. Personal Growth 4. Tuition, Enrollment and Advancement 5. Facilities I would like to thank all the members of the SJA Board of Directors, especially those whose terms of service came to completion last year: Sister Janet Franklin and Sister Mary Anne Hebert. Thank you to all the Board members for their dedication and loyalty to the mission of SJA. I would like to thank the SJA administration, staff and faculty for their tireless support of the 150th anniversary celebration and their day-to-day work ethic and determination to give the students the very best education possible. I would also like to extend a special thank you to the parents who entrust their daughters’ education to SJA. Your partnership with us is vital to the life of the school and the quality of education we are able to provide. May God’s many blessings touch each of you and your families,

Message from the Chair of the SJA Foundation Board

The SJA Foundation received more than $956,842 in total donations this past fiscal year, thanks to donor support for our Annual Fund campaign and the funding of permanently restricted scholarship funds of more than $121,776. Our yearend fund balance totaled nearly $9 million. Foundation funds provided for tuition assistance, facility improvements and other needs of our school.

For the SJA Foundation, 2018-2019 was a year of great success and celebration. The SJA Foundation’s purpose is to ensure the permanence and viability of the Academy and to preserve and grow the school’s assets for future generations. It is through the hard work of our Mission Advancement staff, generous donations of our many SJA supporters and effective investment and stewardship of Foundation resources that our mission was furthered this year.

Funding permanently restricted scholarships is one of the best ways to ensure that a quality SJA education is accessible to as many young women as possible. We could not be more thankful for, or more humbled by, the continued significant support of our donor community. This year, the Foundation contributed $345,863 towards tuition assistance for 137 students; $190,731 in funds for facility improvements; $12,631 in awards; and total support of more than $804,273. These distributions to SJA were somewhat offset by investment growth of more than $370,000 during our fiscal year, in spite of the material market correction which occurred late in 2018.

Once again this year, we witnessed God’s blessings through the incredible financial support of our donor community. Those who donated to the SJA Foundation, regardless of size of gift, contributed to the permanence and viability of our Academy. We on the Board sincerely appreciate the contributions of so many and pledge that we will continue to be good stewards of your generosity and blessings. Sincerely,

Gifts to the Annual Fund have an enormous impact on SJA’s ability to enhance its standards of excellence in teaching, scholarships, student development and facilities. Annual gifts fuel the success of the Academy and touch every aspect of our students’ experience. In 2018-2019, Annual Fund donations provided funding for academic, athletic and co-curricular programs as well as opportunities for faith development. Gifts enabled SJA to promote professional development for faculty and staff members, supply needed resources for updating classrooms, provide additional outdoor dining space and create new men’s and ladies’ restrooms. The entire campus benefited from Annual Fund dollars. The 2018-2019 Annual Fund program at SJA totaled $523,912. SJA owes a great debt of gratitude to the volunteer leadership of the four divisions that constitute the Annual Fund program: Parents, Alumnae, Friends and Faculty/Staff. Thanks go to Yolunda and Jonathan Taylor, Parents Annual Fund; Sharon Ourso Kleinpeter ’67, Alumnae Annual Fund; Michelle and Horace Mitchell, Friends Annual Fund; and Nan Murtagh and Pat O’Hara, Faculty/Staff Annual Fund. Gifts are welcome in the form of cash, checks, pledges, credit card transactions, electronic debiting, stocks and matching gifts. Online donations can be made on the school website at www.sjabr.org.

Annual Fund Program | Donor Societies St. Joseph’s Academy is grateful to all parents, alumnae and friends who shared in the tradition of giving during our 2018-2019 Annual Fund Program. Donations included in this report were made between July 1, 2018, and June 30, 2019, SJA’s fiscal year. HERITAGE SOCIETY (Gifts of $9,977 and above) The Heritage Society is SJA’s premier donor level, which recognizes the total number of SJA alumnae (9,977) through the 2018 graduating class. Mr. and Mrs. Timothy W. Dietrich Mr. Jeffrey Jenkins Ms. Remi Jenkins Mr. and Mrs. Michael O’Connor SHIELD SOCIETY (Gifts of $5,000 to $9,976) The Shield Society, symbolized by the SJA shield, recognizes our deep ties to tradition dating back to 1868. Mr. and Mrs. Owen W. Ashworth Mr. and Mrs. Santo A. Calandro Mr. and Mrs. Steven A. DeBosier Mr. and Mrs. Paul Ferachi (Candi Ogden ’85) Mr. and Mrs. Michael C. Moran Mr. and Mrs. Shane B. Morrison Mr. and Mrs. Roland M. Toups

ARCH COMPANIONS SOCIETY (Gifts of $500 to $999) The Arch Companions Society pays tribute to the beautiful architecture and Roman arches which grace campus.

Gifts in these categories were made between July 1, 2018, and June 30, 2019, SJA’s fiscal year. Fully endowed scholarships and funds are designated with a diamond (◆).

FATHER JEAN-PIERRE MÉDAILLE SOCIETY (Lifetime Gifts of $100,000 or More) This society acknowledges the significant role of JeanPierre Médaille, SJ in the establishment of the Congregation of St. Joseph in 1650 in LePuy, France. Following are the newest members of the Father Jean-Pierre Médaille Society. Beth and Will Pecue II MISSION STATEMENT The mission of St. Joseph’s Academy is to educate young women as responsible and unifying members of the world community. In the spirit and charism of the Sisters of St. Joseph, St. Joseph’s Academy offers opportunities for faith development in the Catholic tradition, academic excellence and personal growth. 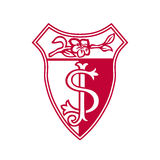