Six Verses Before the Chorus 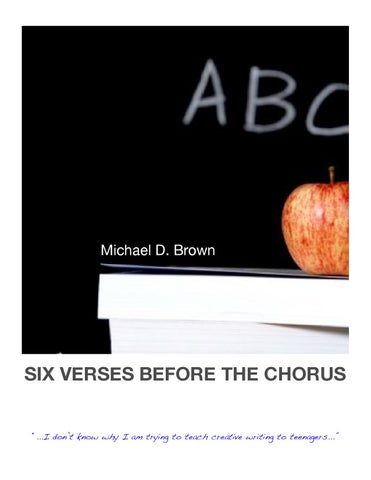 SIX VERSES BEFORE THE CHORUS “...I don’t know why I am trying to teach creative writing to teenagers...”

I My boss appeared as my sister in a dream I had last night, and we were sitting in the grand diningroom of a house I have never lived in. Usually, in my dreams, I am fearful of being insulted or taken to task for doing something wrong; though in my waking life I try to display strength of character. In the dream, I was putting on a CD, and Ana Cecilia said, “Please don’t howl when that starts to play.” I couldn’t think why, but I responded, “It’s called singing. I like to sing along with my music, and if I do, you’re just going to have to put up with it.” I must be making progress.

II I arrived my customary half-hour late to school, and as I was turning the key in the door of my office across from Ana Cecilia, the coordinator, she said, “Michael, there are some people waiting to see you. They’ve been sitting there for about twenty minutes.” “Oh,” I said, “I didn’t see anybody,” though in truth I had greeted a woman with a friendly buenos días in passing. When I went back to invite them in, there sat my invisible student with her mother, come to discuss her daughter’s grades. I wished I’d had such concerned parents when I was going to school as it helps in one’s development. On the other hand, I gained my visibility after my parents’ divorce.

III When I read an e-mail inviting the regular group to come help Diana celebrate her birthday at Mitote on Friday, and as Mary Carmen’s birthday was Tuesday, the celebration would serve a double purpose, I knew I’d go. I count a lot on these sporadic extramuros, and hoped I’d wind up sitting next to Lucia, who loves to perform karaoke, discuss the work of José Saramago, and get down and dirty when she’s away from her students. I looked across the hallway at Ana Cecilia, talking with a student in her office, and mouthed the words, “are you going” while pointing at my laptop. She stood up, came across the hall, and in the doorway of my office, said in a low voice, “I have to leave for Mexico City early on Friday, so I can’t be there, and besides, I can’t drink at this time under doctor’s orders.” I didn’t know whether to feel relieved or disappointed until she added, “Will you be going even though you shouldn’t stay too late? Remember, you have a TOEFL to give on Saturday morning.”

IV For one thing, I don’t know why I am trying to teach creative writing to teenagers, for whom writing of any kind is the furthest thing from their thoughts, and English being their second language places the goal beyond the realm of probability. I had to correct the misuse of articles and pronouns three times with the same student, and even then, he being one of the more vocal lights in the group, I wasn’t certain my advice had stuck. Four young ladies, not including the invisible girl, were sitting in a back corner, avoiding the task at hand, and having a confab about boyfriends, trendy clothes, and television programs; all of which would have been fodder for a nifty composition, but they weren’t writing any of it down. My fifth class of the day exhausts my will to push them. It isn’t as if I’m commanding them to perform miracles, although taking into account their indifference, perhaps it is. One paragraph of six grammatically correct sentences; is that too much to ask?

V The end of the work week brings with it so many possibilities. With a couple of days off, someoneâ&amp;#x20AC;&amp;#x2122;s whole world could change. One could win the lottery, write the first chapter of the Great American Novel, meet a nice woman and start a new relationship, begin growing a beard if it wouldnâ&amp;#x20AC;&amp;#x2122;t come in all gray the way it does, go on a bender and wake up somewhere strange, or think up an invention that might be the key to a new way of life. One could keep in contact with friends, and discover a way to make Sunday nights less depressing. By all means, one must avoid running into overly familiar students at the mall. Of course, change depends so heavily on what one brings to it.

VI Friday afternoon at the end of classes, I returned to my office, and noted I only had six hours to kill before meeting friends for drinks. I would probably spend four of those hours surfing the Internet, one grading papers, and one just twiddling my thumbs and enjoying the air-conditioning. Living on the other side of town without a car, I never considered going home to freshen up before going out for the evening. My boss said goodbye as she was leaving on her business trip, but not before reminding me of things Iâ&amp;#x20AC;&amp;#x2122;d promised to take care of over the weekend, and that I should email her if any problems arose. She carried her overpacked bags down the hallway as I sought out my MP3-filled thumb drive. I was hoping she was still within hearing range as I started singing Chasing Cars along with Snow Patrol, and was heartened to hear Luciaâ&amp;#x20AC;&amp;#x2122;s voice joining in on the chorus.

ABOUT THE AUTHOR Michael D. Brown is currently working as a teacher of English as a Foreign Language in Chiapas, Mexico. He has worked in various capacities in various industries (including a stint in Accounts Payable in a major publishing house).

Six Verses Before the Chorus 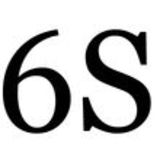