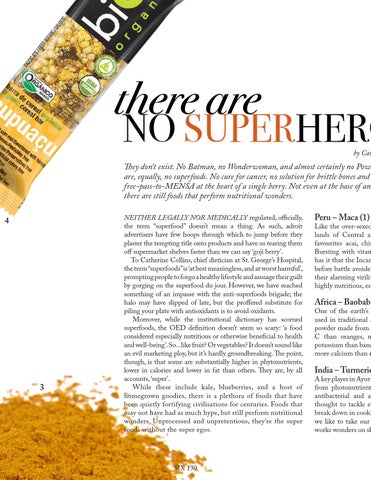 They don’t exist. No Batman, no Wonderwoman, and almost certainly no Pow are, equally, no superfoods. No cure for cancer, no solution for brittle bones and free-pass-to-MENSA at the heart of a single berry. Not even at the base of an there are still foods that perform nutritional wonders. 4

NEITHER LEGALLY NOR MEDICALLY regulated, officially, the term “superfood” doesn’t mean a thing. As such, adroit advertisers have few hoops through which to jump before they plaster the tempting title onto products and have us tearing them off supermarket shelves faster than we can say ‘goji berry’. To Catherine Collins, chief dietician at St. George’s Hospital, the term “superfoods” is ‘at best meaningless, and at worst harmful’, prompting people to forgo a healthy lifestyle and assuage their guilt by gorging on the superfood du jour. However, we have reached something of an impasse with the anti-superfoods brigade; the halo may have slipped of late, but the proffered substitute for piling your plate with antioxidants is to avoid oxidants. Moreover, while the institutional dictionary has scorned superfoods, the OED definition doesn’t seem so scary: ‘a food considered especially nutritious or otherwise beneficial to health and well-being’. So...like fruit? Or vegetables? It doesn’t sound like an evil marketing ploy, but it’s hardly groundbreaking. The point, though, is that some are substantially higher in phytonutrients, lower in calories and lower in fat than others. They are, by all accounts, ‘super’. While these include kale, blueberries, and a host of homegrown goodies, there is a plethora of foods that have been quietly fortifying civilisations for centuries. Foods that may not have had as much hype, but still perform nutritional wonders. Unprocessed and unpretentious, they’re the super foods without the super egos.

Like the over-sexed lands of Central an favourites acai, chia Bursting with vitam has it that the Incan before battle avoided their alarming virilit highly nutritious, en

One of the earth’s used in traditional A powder made from C than oranges, m potassium than bana more calcium than m 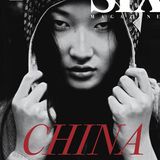 This issue of SIX is all about ADVENTURE. We pulled together a guide to the most fabulous S&E destinations across the globe - catch it on pa...

This issue of SIX is all about ADVENTURE. We pulled together a guide to the most fabulous S&E destinations across the globe - catch it on pa...