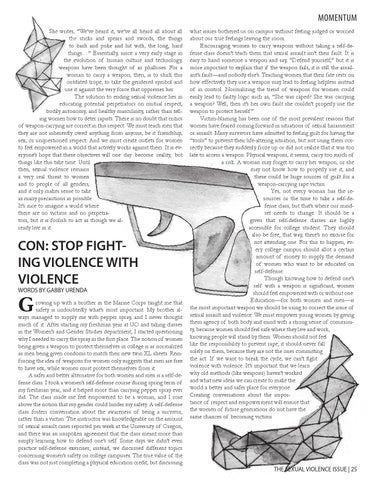 MOMENTUM She writes, “We’ve heard it, we’ve all heard all about all the sticks and spears and swords, the things to bash and poke and hit with, the long, hard things…” Essentially, since a very early stage in the evolution of human culture and technology, weapons have been thought of as phalluses. For a woman to carry a weapon, then, is to shirk this outdated trope, to take the gendered symbol and use it against the very force that oppresses her. The solution to ending sexual violence lies in educating potential perpetrators on mutual respect, bodily autonomy, and healthy masculinity, rather than telling women how to deter rapists. There is no doubt that critics of weapon-carrying are correct in this respect. We must teach men that they are not inherently owed anything from anyone, be it friendship, sex, or unquestioned respect. And we must create outlets for women to feel empowered in a world that actively works against them. It is everyone’s hope that these objectives will one day become reality, but things like this take time. Until then, sexual violence remains a very real threat to women and to people of all genders, and it only makes sense to take as many precautions as possible. It’s nice to imagine a world where there are no victims and no perpetrators, but it is foolish to act as though we already live in it.

rowing up with a brother in the Marine Corps taught me that safety is undoubtedly what’s most important. My brother always managed to supply me with pepper spray, and I never thought much of it. After starting my freshman year at UO and taking classes in the Women’s and Gender Studies department, I started questioning why I needed to carry the spray in the first place. The notion of women being given a weapon to protect themselves in college is as normalized as men being given condoms to match their new twin XL sheets. Reinforcing the idea of weapons for women only suggests that men are free to have sex, while women must protect themselves from it. A safer and better alternative for both women and men is a self-defense class. I took a women’s self-defense course during spring term of my freshman year, and it helped more than carrying pepper spray ever did. The class made me feel empowered to be a woman, and I rose above the notion that my gender could hinder my safety. A self-defense class fosters conversation about the awareness of being a survivor, rather than a victim. The instructor was knowledgeable on the amount of sexual assault cases reported per week at the University of Oregon, and there was an unspoken agreement that the class meant more than simply learning how to defend one’s self. Some days we didn’t even practice self-defense exercises; instead, we discussed different topics concerning women’s safety on college campuses. The true value of the class was not just completing a physical education credit, but discussing

what issues bothered us on campus without feeling judged or worried about our true feelings leaving the room. Encouraging women to carry weapons without taking a self-defense class doesn’t teach them that sexual assault isn’t their fault. It is easy to hand someone a weapon and say, “Defend yourself,” but it is more important to explain that if the weapon fails, it is still the assailant’s fault—and nobody else’s. Teaching women that their fate rests on how effectively they use a weapon may lead to feeling helpless instead of in control. Normalizing the trend of weapons for women could easily lead to faulty logic such as, “She was raped? She was carrying a weapon? Well, then it’s her own fault she couldn’t properly use the weapon to protect herself.” Victim-blaming has been one of the most prevalent reasons that women have feared coming forward in situations of sexual harassment or assault. Many survivors have admitted to feeling guilt for having the “tools” to prevent their life-altering situation, but not using them correctly because they suddenly froze up or did not realize that it was too late to access a weapon. Physical weapons, it seems, carry too much of a risk. A woman may forget to carry her weapon, or she may not know how to properly use it, and these could be huge sources of guilt for a weapon-carrying rape victim. Yes, not every woman has the resources or the time to take a self-defense class, but that’s where our mindset needs to change. It should be a given that self-defense classes are highly accessible for college student. They should also be free; that way, there’s no excuse for not attending one. For this to happen, every college campus should allot a certain amount of money to supply the demand of women who want to be educated on self-defense. Though knowing how to defend one’s self with a weapon is significant, women should feel empowered with or without one. Education—for both women and men—is the most important weapon we should be using to correct the issue of sexual assault and violence. We must empower young women by giving them agency of both body and mind with a strong sense of community, because women should feel safe where they live and work, knowing people will stand by them. Women should not feel like the responsibility to prevent rape; it should never fall solely on them, because they are not the ones committing the act. If we want to break the cycle, we can’t fight violence with violence. It’s important that we learn why old methods (like weapons) haven’t worked and what new ideas we can create to make the world a better and safer place for everyone. Creating conversations about the importance of respect and empowerment will ensure that the women of future generations do not have the same chances of becoming victims.

In light of the sexual violence epidemic that plagues college campuses across the nation, we at the Siren present our readers with THE SEXUAL VIOLENCE ISSUE - a compilation of articles, essays, creative writing, and artwork that focuses on the horrible form of oppression that is sexual violence. 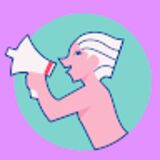