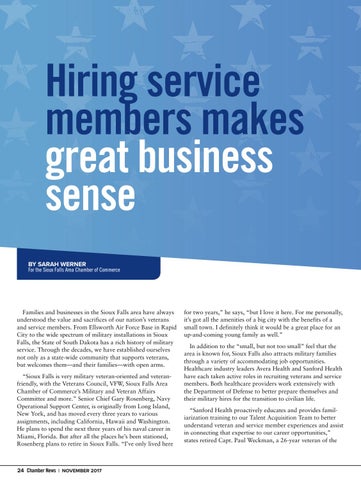 For the Sioux Falls Area Chamber of Commerce

Families and businesses in the Sioux Falls area have always understood the value and sacrifices of our nation’s veterans and service members. From Ellsworth Air Force Base in Rapid City to the wide spectrum of military installations in Sioux Falls, the State of South Dakota has a rich history of military service. Through the decades, we have established ourselves not only as a state-wide community that supports veterans, but welcomes them—and their families—with open arms. “Sioux Falls is very military veteran-oriented and veteranfriendly, with the Veterans Council, VFW, Sioux Falls Area Chamber of Commerce’s Military and Veteran Affairs Committee and more.” Senior Chief Gary Rosenberg, Navy Operational Support Center, is originally from Long Island, New York, and has moved every three years to various assignments, including California, Hawaii and Washington. He plans to spend the next three years of his naval career in Miami, Florida. But after all the places he’s been stationed, Rosenberg plans to retire in Sioux Falls. “I’ve only lived here

for two years,” he says, “but I love it here. For me personally, it’s got all the amenities of a big city with the benefits of a small town. I definitely think it would be a great place for an up-and-coming young family as well.” In addition to the “small, but not too small” feel that the area is known for, Sioux Falls also attracts military families through a variety of accommodating job opportunities. Healthcare industry leaders Avera Health and Sanford Health have each taken active roles in recruiting veterans and service members. Both healthcare providers work extensively with the Department of Defense to better prepare themselves and their military hires for the transition to civilian life. “Sanford Health proactively educates and provides familiarization training to our Talent Acquisition Team to better understand veteran and service member experiences and assist in connecting that expertise to our career opportunities,” states retired Capt. Paul Weckman, a 26-year veteran of the 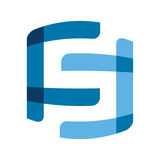 The official publication of the Sioux Falls Area Chamber of Commerce with business news for members about members.

The official publication of the Sioux Falls Area Chamber of Commerce with business news for members about members.