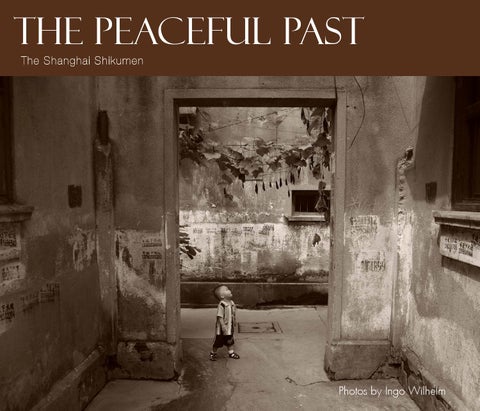 The Peaceful Past The Shanghai Shikumen

For my Father Heribert Wilhelm

This is about the people I learnt to admire, who were missing so much in their life but were still laughing and smiling at me whenever I came around.

They will be gone soon, only memories of them and the place they have lived will remain.

DonÂ´t forget your roots otherwise nothing has existed.

LifeÂ´s more slowly in the Shikumen.

Every time I found this old man parked in a different place. Today he sat beside a wall revealing a slight smile. Although the winter air was cold he seemed quite comfortable. He had the sun on his face.

While walking through the narrow alleys SUDDENLY SOMEONE would pierce around the corner and you would find yourself alone with him or her in that quite place. A silent encounter under the blue afternoon sky. Then there would be a mutual examination.

In order to sell their flowers he and his colleague would cycle through the whole city to Xujiahui, a district where rich people shop.

Form and style are limitless in China. ItÂ´s a place of everything exists and everything goes.

the car wash is run by man power Because itÂ´s cheaper than machines. outside the shikumen sometimes up to six workers simultaneously clean and wax one car.

Gambling is a useful way to kill time and to strengthen the community.

Winter can get really nast y in Shanghai. ItÂ´s clamp, cold and humid. The humidit y sneaks into the clothes through every opening and lets the body quiver. Time for some healthy fruits to strengthen up the immune system.

The fishes in the bowls looked unhealthy. They were lying on the side or even swam upside down. Maybe they were imported and still hadnÂ´t got used to the time difference.

Unlike his teeth his coat had still all the buttons.

Be trendy and be recognized.

On TV this afternoon: the lively street and the neighbors.

This group of retired old ladies was chat ting and discussing the newest gossip about neighbours, husbands and children. here, Nobody needs to be alone.

Very nervous and uneased being photographed this alleged service personel first deliberately cleaned his shirt and arranged his hat before suddenly standing stiff, unsure of the things to come.

This man maybe pondered about past, future, Life or family while the war of the worlds had already begun in the back.

A child doesnâ&amp;#x20AC;&amp;#x2122;t care about old or new. It sees fun in every little thing and can play everywhere and with everything.

the chicken and the underware.

Somehow, the dog looked pittyful. The way he winded his body and turned his eyes up towards me gave the impression of not being so healthy.

henever I left the noisy streets of this busy and pulsating Shanghai and entered the Shikumen all became silent and peaceful in a second. I was dragged into another world, some decades back in time, not seeming to have any thing to do with the city of nowadays with all its neonlights, screens, commercials, KTVs, shopping malls and electronic stores. the lanes of the Shikumen, like tunnels, at their end the gate to noise, a hole to jump into the 21st century. I always forgot my obligations out there and felt like home. Although the rubbish everywhere, the unpleasant smell when passing by public toilets and the obviously deteriorating and crumbling faĂ&amp;#x2021;ades

were unignorable, every new lane brought new interesting and heart warming details and faces. The fragrance of freshly washed clothes dripping out of the sunlight somewhere up above, the slightly sour scent of bamboo steamers mixed with hot moist clouds of steam, the laughing faces of little children, a drying chicken on a hanger next to underwear, the noise of frizzling vegetables coming out of some open door or the unforgetable smile of an old woman exposing an incomplete piano keyboard of teeth. And then this silence. Every time it amazed me anew how incredible silent it could be inside the shikumen right in the middle of this huge city shanghai.

due to a low living standard the Chinese here have to get by with very lit tle and therefore are Always good at improvising. they would fix some hole in a roof with an umbrella, use a brick to make a table even or tie fifteen elephant seized bags of styrofoam onto one bicycle in order to bring them to the recycling. But the people of the shikumen seemed always happy. they were smiling and willing to invite whoever showed interest in their life. One thing though you have to get used to in the shikumen: there is no privacy. All is one big family. Everyone lives his life door to door. And most of the time life takes place outside the door.

he Shikumen 石库门 (meaning “stone gate”) originated in the 1860 s when accelerated Westernization and urbanization resulted in an architec ture mix be t ween Chinese traditional courtyard lifestyle and british lane houses or Terrace houses. the wall around the courtyards was ment to defend against fighting and robbery. Named after the stone Archs marking the alleys and house entrances These typical Shanghai residentials consist of t wo to three storied houses and are organized in dense neighborhood blocks connected by narrow alleys not suitable for cars to enter. Along the out ward facing roads there are normally small shops on the ground floor.

bigger shikumen sometimes developed some small market street as an inner axis and center. At their peak of existence there were around 9000 shikumen-style buildings in Shanghai making it some 60 % of the city´s total residential buildings. In the 1940 s, 80 % of the city population lived in houses of the shikumen style. to maintain a little privacy the houses feature a front courtyard surrounded by a brick wall But in comparisson to other traditional chinese houses the courtyard is relatively small. After the second World war most of the wshikumen houses were excessively over-habited. As a consequence living rooms were often been divided and rented out to more people.

up to sometimes four families lived in those divided houses under poor circumstances. Nowadays most of the still existing shikumen were turned into modern and fashionable alleys with chic boutiques mainly for tourists. art shops, fashion and delicatessen shops lure people inside. but the atmosphere is already a different now. some of the really old lanes have survived though but are vanishing and deteriorating more and more. they make place to futuristic malls and office buildings. the shikumen are the remains of a long part of shanghai´s and China´s history, an architectural fusion of east and west.

Preparing food for the guests.

Cooking is an essential part of Chinese life style. It starts early in the morning and ends late at night; mainly always warm dishes. The body is warm and it has to be kept that way, so they explain. In every household and through every open door you can spot meat being cut, vegetables being washed, hear pans frizzling or see pots bursting out clouds of steam that press themself through every possible opening in the house walls out onto the street.

This woman invited me into her house, which was just a 12 square meter room. Except for the bed and a small corner for me to stand the room was packed and decorated with Buddhism accessories and household items. She sat on the bed, crossed her legs, closed her eyes and started to pray. After that she told me her life. One second laughing, the other second crying. Then she gave me a Buddhism wrist ring as present.

Simplicity is present everywhere. some would call it poverty, others would just call it improvising. But Things donÂ´t have to be complicated in order to work.

I met this 97 year old man and his son in a sunny place in front of their home. The son was shaving his father. For the picture the plastic coat for keeping away the hairs was taken off and I caught the fatherÂ´s smile. When I came back one year later the friendly old father had already left.

His father eagerly stuffed more and more rice into the boyÂ´s mouth until it all fell down. And he only stopped because the child began to smile at me.

a normal taxi cannot drive into the shikumen. the Alleys are too narrow. so thEY USE motorbikes. and they absolutely donâ&amp;#x20AC;&amp;#x2122;t care about narrowness OR SPEED LIMIT.

Generations change and the little ones are already deeply involved in the family and household routine. The elderly can now rest and watch over the children doing their part.

For young people the shikumen is no place to ge t excited about. they need their k t vs, clubs, Starbucks or shopping malls. And here they can only find narrow grey alleys, old people and outside toile ts.

He reminded me of some movie star or actor. Maybe Columbo. Always dressed in a proper suit regardless of the situation or place.

According to the owner this fluffy carpet-like celebrity had already shown his Fur in several commercials. Today, on Sunday, was the perfect day to have a rest from the show business and enjoy the relaxing and refreshing luxury of some foot bath and at tentive care.

His new treasure was bigger than his hand and surely filled with a lot of good things.

all live under one roof. privacy is rare, family ties are strong and valued above all. a huge part of Life takes place outside the house. and normally most of the doors are kept open. also in winter.

Chinese New Year! I got up very early and strolled through the narrow streets. It was not easy to find a place where the Chinese put their ear-breaking firecrackers right at the time of my appearance. And when they finally did, war broke loose.

The smoke of the firecrackers smothered all streets and houses. Like in a ghost town one had to search the path out of the labyrinth while dark shadows of people were running around everywhere in the mist.

Chinese New Year lasts until the Yuan Xiao Jie Festival on the fifth day. That is the end of the noise and the actual beginning of the new year.

He didnÂ´t move, he didnÂ´t speak and maybe he is still sitting there waiting for the sun to move over his face.

The sun was burning; dripping water and the smell of washed clothes in the boiling midday sun. The bird didnÂ´t make a sound. It was stunned by the heat too.

â&amp;#x20AC;&amp;#x153;It was love at first sight. And from that moment on we shared everything and no force on earth shall tear us apart.â&amp;#x20AC;?

No entry for adults.

This manÂ´s body consisted just of two parts: shoulders and legs, tightly hold together with a belt. The middle part was missing.

The Shikumen have no inside toilets and so all businesses have to be dealt with outside.

This man was nearly two meter tall and I had difficulty in following him. He made huge steps. Something else also didnÂ´t fit: his jacket looked like a pyjama, his shoes longed for a mountain hike and the bag in his hand wanted to go to work.

A young girl buying fresh vegetables for a nearby restaurant.

Sunday shopping on the market.

Against all expectations their house on the third floor was very spacious. A huge living room of thirty square meters and an equally seized bedroom. The kitchen was used with other neighbours and was located just outside the apartment door where the couple made very delicious Jiaozi. On their working desk, behind glass, they kept all the pictures of their family members and themself when they were young. Through a south faced rooflight sun came in, flooded and warmed the room and illuminated the green-brown patina of the old wooden walls. A silent afternoon. It was peaceful.