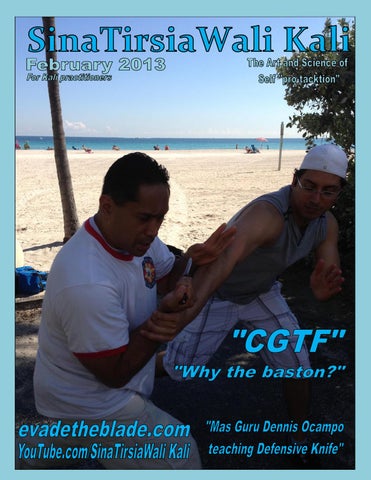 SinaTirsiaWali Kali “Can you stop me, can I stop you” “A system where no person needs not to fear another”

Why do we practice with a baston?

QUOTE OF THE MONTH

In a battle all you need to make you fight is the will to survive and the knowledge that it&#39;s more dangerous to die than to live.”

This is a common question that I hear on a regular basis. I often tell my students that “you will not be carrying a 28-32 inch baston with you when you go to the mall, the beach, to church, or on a date.” So why do we practice with it? This question is very easy to explain, but not easily understood. We practice the 64 attacks and the 181 siniwalli in class and by ourselves for several reasons. First, one needs to understand that the baston is an extension of your hand and is a prepatory tool for the blade. A student will never understand this if two things are not present. First the student needs to practice the 64 attacks, 181 siniwalli, and the various drills of the SinaTirsiaWali Kali system. Second, the teacher needs to relate the movements of the baston to the empty hand and the blade. If these two are not evident, then the student will never know, understand or do.

CGTF: The Goal of Self—Protection Counter, Gap, Trap, and Finish! If you have ever been in class or have ever been a spectator, you have probably heard me, Guru Clayton Griffin, or Guru Gerry Reyes emphasizing the importance of this strategic STW concept. Many systems that I have seen emphasize the largo mano, or long range attack and defensive concept. Due to the fact that Sina Tirsia Wali is derived from the beliefs of the Pekiti and Dekiti Tirsia system and Doce Pares, STW emphasizes the self- protection as well as the “finishing” aspect. In the words of Mas Guru Greg Alland, founder of the Sina Tirsia Wali Kali system, “we must finish the threat of our opponent. We cannot fight our opponent because fighting takes too long.” In order to finish the threat of the opponent, the concept of counter, gap, trap, and finish must be utilized. This basically means that in the midst of protecting ourselves, STW practitioners must counter the attack of the opponent, close the gap or distance between us and the opponent utilizing skillful footwork and angles. Once this is accomplished, we must trap the opponent and the opponent’s weapon in order to protect ourselves. This gives the STW practitioner the ability to control the opponent and the weapon he or she may have whether it be an impact weapon, blade, or empty hand. When this stage is accomplished, finishing the threat of the opponent becomes the quickly is the main priority.