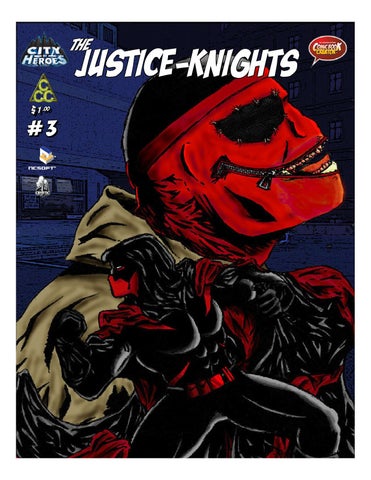 how can this be a curse ?

i love everything about this.

the powers~ the costume.

~soaring through the sky.

i love being a hero.

the justice~knights base. the war room.

why don't you live here then ?

you mean move to paragon city ?

oh ? explain it to me then.

it's not that simple.

my girlfriend and i are finally back together after all this demon stuff.

which is quite amazing~

~given i was possessed by a demonic spirit, did alot of bad things and~

~then thanks to the justice~knights, was depossessed and after the demon spirits gone, i still have his powers, and she~she . . . can over look that.

she still loves me even with part of me being demon. . . ~ish.

things with her and everything else are starting to look up. i can't just leave that all behind.

there's a difference between living there and using the ship a few times a week to teleport me across the country to paragon. do my hero

thing then take the teleport back home.

you could just reverse that. well technically i'm not in paragon city now.

you know what i meant.

no and its not just that. where would i live ?

~~and no way. i'm not relying on that anymore.

what would i do for money ?

YOU MUST WORK OUT.

I mean. . . i can't stay "stalkling the sidekick of sin stalker" forever, you know.

don't get me wrong~

if it wasn't for all that training as "the sidekick , i wouldn't have learned to control my powers or~

what does your girlfriend think ? I am sorry. We can do the picnic later. i just need to be a man and stand on my own two feet some day. and I don't think i can if i am always "stalkling"

I really have to go now. I promise i'll make it up.

i don't think she really gets the danger part.

it'll hit her one day and then what'll you think she'll do ?

~or simply just pass out.

even in paragon city, even with an emergency teleporter system ~ or if that button is out of reach when ~

heroes show up out of no where, act all full of themselves,

~and then they dissapear never to be heard from again.

i bet i could one~shot it.

either they get scared and run~~

~or lose interest in being a hero~

they should have praised me, worshipped me. . .

the news likes to downplay and avoid the "unconfirmed" hero deaths.

editor note~ frame 2 and 3 done by ** sparky from "spectacular sparky" available at www.cohcomics.com

when it hits her ~ what do you think she will do ?

i love this city.

i love being a hero.

you saved me ! thank you ! it's the most amazing place ever.

it was my pleasure miss.

the smiles on their faces.

~because i have this beautiful young grandaughter at paragon university.

let me show you a picture.

i really wish i could live here and be here all the time . . .

because i'm in love.

being a hero is a part of you.

and its probably going to be harder for her than you realize.

it's one of the hardest.

harder than it was to accept your demon~ness.

and you need to realize you have three loves in your life. three ?

and being a hero.

it's not fair to her.

~~ every hero gets to this point in some way or another.

. . . just because you want to go home each night and hold them in your arms.

it just all depends on how long they can deny themselves the truth.

being selfish and putting their lives in danger . . .

kiss them. love them.

she was my true and only love.

and my denial almost got her killed.

we need to talk.

hey love~~ ~~what are you doing in costume ? i thought we agreed it was over.

i can feel their pain screaming in my mind.

i can't just ignore that.

you have to talk to her.

it's not fair to her.

hoping something will happen and make it work for us.

hope is a good thing but you need to be logical

it's either her or being a superhero any idea which one you'll choose ?

i guess i'll decide when i see her.

we need to talk.

Next time in the Justice~Knights comics . . . The next page !

you're sure about this ? paragon city, RI positive.

whenever a corporation is involved its almost always crey industries.

yeah, but that's what you said last night when you broke into crey.

so i got it wrong this time. it's cy corp. i'm only human.

sister psyche freedom Phalanx member and one of the most powerful psychics todate.

you just try and find any excuse to check out countess crey.

manticore the rogue~ish member of the freedom Phalanx.

don't forget, i'm psychic. i know about those thoughts of ms. liberty and myself that cross your mind from time to time.

i'm almost through the ventilation system, by the way.

dont worry though, i let it slide. afterall, you're only human . . .

manticore ? i can hardly read you psychically anymore.

i'm letting him out.

to be continued in the first justice~Knights multi~issue story arc. Starting with issue 4.

to to the the readers, readers,

with with the the end end of of issue issue 3 3 brings brings a a closing closing point point for for me me and and this this comic. comic. you you see, see, the the next next story story arch arch was was actually actually written written first, first, but but because because of of the the road road this this series series is is going going down down and and the the way way characters characters were were first first shown, shown, i i decided decided to to do do a a few few issues issues before before hand. hand. the the result result were were issues issues 11 through through 3. 3. even even the the first first issue issue has has "introductions" "introductions" in in it, it, but but there there is is more more to to these these first first 3 3 issues issues than than simple simple intros, intros, it it was was a a setup setup and and a a test. test. a setup setup because because i i wanted wanted to to touch touch on on things things that that later later down down the the series series a you you could could look look back back and and go go "hey "hey .. .. .. so so that's that's what what that that was was about. about. .. ." ." at at least least i i hope. hope. as for a test, i was testing myself. as for a test, i was testing myself. you'll you'll notice notice a a difference difference between between these these first first three three issue's issue's writting writting styles. styles. the the first, first, my my usual, usual, flipping flipping back back and and forth forth in in an an attempt attempt to to keep keep the the reader reader interest interest until until the the story story develops. develops. also also it it shows shows the the story story from from multiple multiple perspectives. perspectives. the second, second, a a flat flat story story that that progresses progresses in in a a linear linear progression progression and and sticks sticks the only only with with the the hero hero characters. characters. it's a a jumble jumble and and even even i i am am unsure unsure about about it. it. the yes, i i said said barf. barf. it's the third, third, barf. barf.yes, i i probably probably didn't didn't do do this this style style justice justice but but it's it's my my first first try try and and only only my my like like .. .. .. like like the the 4th 4th or or 5th 5th story story i've i've ever ever written written completely completely through. through. tell me me if if it it is. is. anyways, anyways, i i hope hope its its still still decent decent enough enough for for you you to to enjoy. enjoy. tell so with with the the end end of of issue issue barf, barf, we we head head towards towards the the first first comic comic story story i i wrote wrote ( ( with with so some some new new edits edits based based on on what what i've i've learned learned ) ) and and I I hope hope you you won't won't be be disappointed. disappointed.

have an opinion about the comic?

justiceknightscomic@gmail.com email email your your critques, critques, your your comments comments can can appear appear here here for for all all ( ( who who read read this this comic comic ) ) to to see!! see!! use use the the title title "" comic comic comment" comment" for for comments comments and and the the title title "questions" "questions" for for questions. questions. please please avoid avoid the the dirty dirty language. language.

and thank you for reading my comic ! Join the sidekick of Sin Stalker, Stalkling, as he tries to figure out the answers to his questions about being a boyfriend, a superhero and...

Join the sidekick of Sin Stalker, Stalkling, as he tries to figure out the answers to his questions about being a boyfriend, a superhero and...