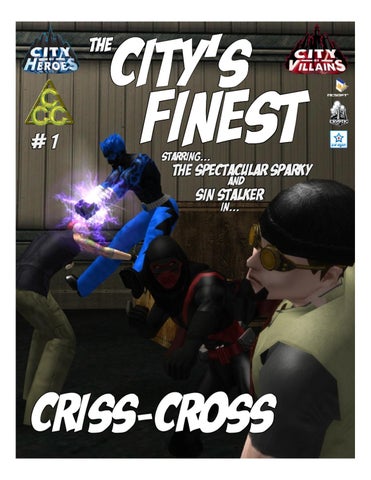 the spectacular sparky and sin stalker in...

the city's finest even before before statesman's statesman's call call went went out, out, this this city city has been been filled filled with with heroes. even even before statesman's callhaswent out,heroes. this city has been filled with heroes. they fight with all they have to overcome the evils which loom upon the city. they are the guardians of the day, the defenders in the night, the vengeance of the innocents, upholders of law and justice against crime. they keep us safe.

they are our city's finest and here are two of them... the spectacular

sparky Born a human lightning rod, sparky discovered early in life that he had an electric personality. currently the world record holder for surviving the most lightning strikes to the head, sparky has become a hero of paragon city, much to the horror of the locals. with his tendency to get into more trouble than he can handle and his frequent stays at the many medical facilities located in paragon city, sparky is always on the lookout for heroes to team up with. now if only they'd stop running away.

sin stalker Determined and restless, Sin Stalker is not the conventional image of the super strong hero. From his troubled past, he has emerged as a man of indomitable drive. His only power/ability is to sense the physical, psychological, and emotional pain of others. With the goal to end people's suffering as his motivation, Sin Stalker hunts out in the night finding pain and ending it where he must. Sin stalker accepts the fact that he is rather powerless in combat and even though he would rather not, accepts needing to teaming with other heroes.

written by CoH screenshots by photo editing by

*the spectacular sparky and all related characters created by mark dunlop.

*from the coh forums.

*sin stalker and all related characters created by joseph cohen.

Time for a night off and some quality tevevision.

what is going on with the sidechick brigade lately?

How hard can it be for Ms. Liberty and her so-called Vindicators to keep an eye out on a known criminal like silver mantis?

you don't take them out to party in pocket d.

do the bad guys need to have name tags that say

Personalized television? this is even better than smell-o-vision!

what's that boob-tube ? timmy stuck down a well ?

but i suppose i can check it out.

Well, that's it for us tonight. stay tuned for an all new rona live next, on PnN.

nothing happening ? but that can't be. television is never wrong.

hm, maybe i got the wrong steel canyon exchange bank of paragon--

...maybe that was a car backfiring.

no one try nothin'!

just hand your money over and none of y'all be hurt.

do you have any idea what you're doing ?!

see, you rob the bank, then the bank asks the government for a bailout. then our taxes get raised and the economy suffers. can't you see you're only hurting yourself!

get the wise guy.

"wise" ? all that money for pr is finally paying off!

is that all you got ?

woah, don't you know it's rude to tackle and run ? its da stalka'. get outta here!

you didn't even tell me your name.

i feel so violated. oh, i'm sparky by the way.

why does everyone keep telling me that ?

you don't know what you were up against.

you stay with the authorites. I'll go out the back.

take the credit. i have a job to do.

what? need to find an old lady to blindside. you...

What are you doing here ?

well i have this problem. it turns out that i owe someone an apology but i'm still upset that he let my bad guy get away.

you don't understand what kind of "bad guy" you're dealing with.

he's a rapist, a murderer, a torturer, a baby killer.

he'll keep you alive as long as possible, keeping you in as much pain as possible... beyond imagination.

you can't stop him. you can't kill him.

all you can do is hope to slow him down...

all the while he'll strip the flesh from your muscle, muscle from your bones... as slow as possible.

slow him down from the eventual destruction of everything that crosses his path.

hey, i know. how about we go halfies ?

no, wait! I meant it. let's take him down together.

We seem to have gotten off on the wrong foot. you jumped on me

and the bad guys got away.

now after some friendly bonding, this is the part of the movie where the two heroes team up for the first time to take on a common threat.

it's also the part where the silent, emo dark loner, thaws his icy heart and works with the goofy and spectacular me.

you're not going to stop, are you ?

...not to mention the devilishly handsome aspect of me.

one question. how do we know where to go ?

...if we happen to encounter a romantic interest. i'll let you have her.

... madcap is pain. he's in constant pain and he enjoys it.

i sense pain... especially his.

so den i said "datz wut she said", an' everyone lul-ed.

how did it go ? my archnemesis suffer an agonizing and very painful death ?

please don't spare any of the gruesome details.

yeah... about that. ya'see, we had a bit of unforeseen interferance. another hero stepped in.

i'm not talking to a lackey anymore. i want to talk to you.

you haven't said a single thing since i met you.

for what we gotta deal with, yeah. who was the hero who interfered ? you could at least enunciate a little better. fine, you want more ?

Sin Stalker ? hahah! isn't that your archnemesis ? da boss and he have a history, yeah. doesn't change the cost going up.

cost? if anything i should just let sparky and sin stalker deal with you. with a little luck you'll wipe each other out.

BAH! YOU THINK THAT COPIOUS AMOUNTS OF LARGE CALIBER BULLETS WILL STOP ME ?

YOU UNDERESTIMATE THE POWER I WIELD!

dark sparky. i knew you were behind this.

aarrr!! you can have whatever you want!

you got me there.

I told you not to jump out like that. sorry, but it was totally dramatic and all.

that makes us even.

you don't have to yell, scorpion. I'm standing right here.

shut up! enough with the stupid sarcastic comments!

And i have the high score.

everything is a joke to you. i'm trying to kill you and you think it's a game!

why won't you just die! because i don't want too!

yeah! i'll call the cops to collect these guys.

i already called it in.

then how about a pizza ?

he was wrong by the way.

he and a few of his manglers slipped away when we were focused on dark sparky.

no. i'll try tracking him again though.

dark sparky. he's wrong about you.

can we catch up to them ?

this isn't a game or a joke to you. you do take this serious. ...when you need to be.

hey, what did i tell you ? silent, dark emo-loner thaws his icy heart. oh, and don't go around telling people about that "no joke" thing. it'll ruin my rep.

you're going away for a long time, buddy.

maybe back alley beefcake will ask if

"you gonna' pick up that soap?"

he's got something coming from his mouth!

you think this makes us even ? In the style of the World's Finest and the Brave and the Bold comes a CoH related teamup comic series where each issue showcases two differe...

In the style of the World's Finest and the Brave and the Bold comes a CoH related teamup comic series where each issue showcases two differe...