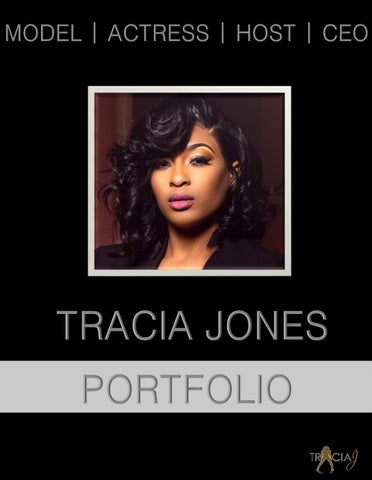 COVERGIRL STYLE “THINK OUT OF THE BOX”

Tracia J, tell us about yourself: I am a Birmingham, Alabama native who stumbled into the entertainment industry as a Model. Now that I'm in entertainment, I take my profession seriously. My career, immediately, excelled to the heights of New York Fashion Week within eight months of me first walking a runway. I have modeled for top designers in Birmingham, Atlanta, Los Angeles and New York. As an aspiring actress, I am featured in “Real Husbands of Hollywood," "Love & Hip Hop Hollywood," "Day Time Divas," “Star,” and "Being Mary Jane," and in movies, "Sleepless," starring Jamie Foxx and "True to the Game" (Columbus Short/Vivica Fox). Also, I have hosted radio shows, The Billboard Award Red Carpet in Las Vegas, as well as, interviewed, singer, Mila J before a special rendition of “106 & Parks” during the BET Awards. I host many events at venues in Birmingham, Atlanta and Hollywood. When did you get your first break in the industry? I got my first break in the industry as a Model when my friends and I attended a fashion show in Atlanta hosted by Rasheeda and Kirk Frost of Love & Hip Hop Atlanta (December 2013). A Fashion Designer was short a model and asked me if I would model a pair jeans from her line. She asked if I ever modeled before, I told her “No,” but she used me anyway. What makes you different from other women in the industry? I believe what sets me apart from other women in the industry is my grind, my support system and my versatility. Not only have I modeled for brands such as American Apparel and walked in major runway shows, I am also an actress, host, CEO and co-owner of a full hair care product line, "Simply Straight Hair Care by Tracia J." I love being able to do a variety of things to share my talents with the world. I have also pursued and accomplished my degree in Sports Management at Troy University (by way of Jacksonville State University).

How have you adjusted to branding your name to a hair care product line and assuming the helm as the co-owner, the face and CEO? Due to my career in entertainment, I wear various wig units for photo shoots, on-set, etc. so my biggest adjustment is finding time to wear my real hair, which is extraordinarily, healthy due to usage of my products and the professional Stylists who take care of it. It has been a challenge balancing travel for work while in school and overseeing a company, but I take it one day at a time and focus on my list of priorities, as well as, delegate responsibilities to capable individuals. However, I must say that my products gives my weave and wig units a luxurious shine and feel. Try it!

Have you appeared in any music videos or other magazines? If so what were they? Yes, I was lead in Dae Dae's "Spend It" video and "100 Bandz" Young Dolph and Zoey Dollaz. I am also featured in "Good Drank" 2Chainz, Gucci Mane & Quavo, Tiffany Foxx “War Zone,” Jay Fizzle “Catch the Box” and others. Magazines: I am featured on the cover of Pressure Magazine and other nationally published magazines: Rollingout, GGurls, Freddy 'O, Slim Goodie, Dynasty Magazines and now, my own,“Simply Straight by Tracia J International Style.” How often do you work out and are you on a special diet to maintain your physic? I, normally, work out 3 times a week and I must say that Simply Straight Hair Care Products is a great defense against my hair sweating during work outs. My hair remains straight, is not sweaty and looks and feels great. I am on a meal plan where I cut pork and beef out of my diet, plus I drink plenty of water. What are you, currently, working on? I am, currently, filming a new reality TV show, music videos, a movie, preparing for New York Fashion Week and a few other opportunities that that I am not at liberty to discuss. I am working to build my Hair Care empire, to include releasing my own Hair & Fashion Magazine! I'm so excited and I would like to thank my supporters and all of those who have participated in making this dream come true. We have some awesome talent and celebrities in this issue. I also want to thank my management team for their continued efforts and support.

What advice can you give to those who are looking to model or get into entertainment as a career? I would like to encourage aspiring models, artists, actors, etc. to never give up on their dreams, no matter what. Stay true to yourself and always stay on the grind. Educate yourself, practice, network, seek out opportunities for your next gig and do your best. Always know that something big is about to happen to you! @IamTraciaJ @SimplyStraightbyTracica J

The phrase “Not just a pretty face” is definitely applicable to Tracia Jones, a Birmingham-Alabama native. Many say after meeting this breath-taking “Model/Actress/Host/Radio Personality,” in person, she is the epitome of intelligence, humbleness and grace. With the face of a goddess and body of a “Super Model” its hard to believe that this veteran only entered the entertainment industry only a short 3 years ago. Jones’ humble beginnings were in dance and theater, those experiences help created aspirations of becoming a Model. Her dreams began to materialize when opportunities in modeling, acting, media coverage and hosting were offered. This quickly propelled this superstar, in the making, to the heights of New York Fashion Week Shows, Atlanta and Los Angeles Fashion Week events. She hosted the 2016 Billboard Awards Red Carpet in Las Vegas and interviewed artist Mila J for the BET Awards in Los Angles. She is the ultimate celebrity host as she hosts many celebrity events on Hollywood Blvd and throughout the U.S. She was honored to host the NFL Players Association Golf Tournament Dinner in Atlanta, GA. She has also made a splash in TV and film as an actress. Tracia J was featured in Rollingout Magazine as entertainment’s new "it girl“ as she, appeared in “Real Husbands of Hollywood," "Love &

Hip Hop Hollywood," "Day Time Divas," “Star,” and "Being Mary Jane," and in movies, "Sleepless," starring Jamie Foxx and "True to the Game" (Columbus Short/Vivica Fox). She has hosted radio shows, the Billboard Awards Red Carpet in Las Vegas, as well as, interviewed, singer, Mila J before a special rendition of “106 & Parks” during the BET Awards. She hosts many events at venues in Birmingham, Atlanta and Hollywood. Tracia J, has appeared in mainstream videos with Artists such Future, lead in Dae Dae's "Spend It" video, "100 Bandz" Young Dolph, "Good Drank" 2Chainz, Gucci Mane & Quavo, “War Zone,” Tiffany Foxx, “Catch the Box,” Jay Fizzle and others. She has been published in several national magazines: Cover of Pressure Magazine, Rollingout, GGurls, Freddy 'O, Slim Goodie, Dynasty magazines. She also has her own professional Hair Care Line, “Simply Straight by Tracia J,” as well as her own Magazine, “Simply Straight by Tracia J International Style.” Tracia J is currently, filming a new reality TV show, music videos, a movie, preparing for national fashion weeks and other opportunities. She speaks her mind as a Radio Personality on Power 904, previously with 99.9 The Plug and Finley Media Group. Although, this beauty stays busy, she still made time to pursue a degree in Sports Management from Troy University (by way of Jacksonville State University). Read More about Tracia J: http://rollingout.com/2016/05/24/5-best-moments-billboardmusic-awards-red-carpet/; http://rollingout.com/2016/05/10/863981/