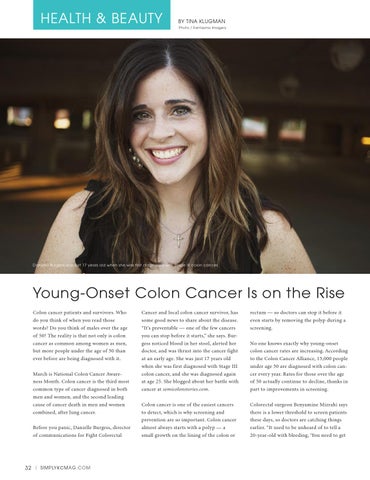 Danielle Burgess was just 17 years old when she was first diagnosed with Stage III colon cancer.

Young-Onset Colon Cancer Is on the Rise Colon cancer patients and survivors. Who do you think of when you read those words? Do you think of males over the age of 50? The reality is that not only is colon cancer as common among women as men, but more people under the age of 50 than ever before are being diagnosed with it. March is National Colon Cancer Awareness Month. Colon cancer is the third most common type of cancer diagnosed in both men and women, and the second leading cause of cancer death in men and women combined, after lung cancer. Before you panic, Danielle Burgess, director of communications for Fight Colorectal

Cancer and local colon cancer survivor, has some good news to share about the disease. “It’s preventable — one of the few cancers you can stop before it starts,” she says. Burgess noticed blood in her stool, alerted her doctor, and was thrust into the cancer fight at an early age. She was just 17 years old when she was first diagnosed with Stage III colon cancer, and she was diagnosed again at age 25. She blogged about her battle with cancer at semicolonstories.com.

rectum — so doctors can stop it before it even starts by removing the polyp during a screening.

Colon cancer is one of the easiest cancers to detect, which is why screening and prevention are so important. Colon cancer almost always starts with a polyp — a small growth on the lining of the colon or

Colorectal surgeon Benyamine Mizrahi says there is a lower threshold to screen patients these days, so doctors are catching things earlier. “It used to be unheard of to tell a 20-year-old with bleeding, ‘You need to get

No one knows exactly why young-onset colon cancer rates are increasing. According to the Colon Cancer Alliance, 15,000 people under age 50 are diagnosed with colon cancer every year. Rates for those over the age of 50 actually continue to decline, thanks in part to improvements in screening. 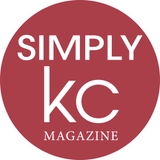