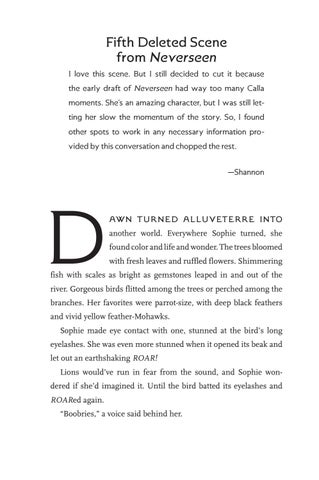 Fifth Deleted Scene from Neverseen I love this scene. But I still decided to cut it because the early draft of Neverseen had way too many Calla moments. She’s an amazing character, but I was still letting her slow the momentum of the story. So, I found other spots to work in any necessary information provided by this conversation and chopped the rest. —Shannon

AWN TURNED ALLUVETERRE INTO another world. Everywhere Sophie turned, she found color and life and wonder. The trees bloomed with fresh leaves and ruffled flowers. Shimmering

fish with scales as bright as gemstones leaped in and out of the river. Gorgeous birds flitted among the trees or perched among the branches. Her favorites were parrot-size, with deep black feathers and vivid yellow feather-Mohawks. Sophie made eye contact with one, stunned at the bird’s long eyelashes. She was even more stunned when it opened its beak and let out an earthshaking ROAR! Lions would’ve run in fear from the sound, and Sophie wondered if she’d imagined it. Until the bird batted its eyelashes and ROARed again. “Boobries,” a voice said behind her.

She spun to find Calla standing among the trees. Her dress had been woven from tiny flowers, and she had the same buds twisted into her plaited hair. “What did you say?” Sophie asked. Calla pointed to the roaring birds. “Boobries. I’m sure your friend Keefe would have a plethora of jokes to make about their name.” Sophie smiled. “Yes, he would.” Calla held out her arm and made a series of soft clicks. The boobrie that had roared batted its eyelashes again and swooped to land on Calla’s wrist. The tiny gnome stroked its long tail feathers, which were the same vibrant yellow as the Mohawk on the boobrie’s head. And when the sunlight hit its body, Sophie could see an iridescent tint, like slicked oil. “How is he doing?” Calla asked, and at first Sophie thought she meant the boobrie. “Hopefully better today. But we’ll see.” She bit her lip, afraid to ask her next question. “Have you heard anything from Lur and Mitya?” “Unfortunately, no. But they warned the Collective that there’s been increased ogre activity in the area, and that is slowing their search.” Sophie tried to convince herself that no news was good news, but she honestly wasn’t sure what “good news” even was. Calla flicked her wrist, launching the boobrie back to its branch. “You’re up early.” “So are you.” “I’m always up at this time. I take my ten minutes during the warmth of midday.” “Is that really all you sleep?” Sophie felt tired just imagining it.

“Well, it used to be twenty, but I need every minute I can get. Without Sior—and Gora and Yuri—there is a lot to keep up with.” “Do you need any help?” Sophie offered. “You’re very kind, but it’s the type of work only a gnome can do. It’d be nice to have some company, though.” Sophie followed Calla as she darted off the path, into the trees. The forest turned wild—an obstacle course of drooping vines and branches and roots that seemed determined to throw off Sophie’s balance. Calla wove through effortlessly, not cracking a twig or knocking a single leaf. “Where are we going?” Sophie asked. “To pick up where I left off yesterday.” Several minutes later they reached a copse of trees that seemed duller somehow. Fewer leaves on the branches. No flowers. No birds. Calla pressed her palm against one of the trunks. “I’m so sorry,” she whispered, running her hand down the crumbling bark. “I haven’t forgotten you.” Sophie realized Calla was talking to the tree. She whispered promises and apologies before she started to sing. It was a happy song, about the shifting seasons and the tireless sunlight that never strays too far away. Calla’s voice felt heavy in Sophie’s ears, like it could sink straight into the ground. And maybe it did, because the tree bloomed with new flowers and sprouted new leaves. “Amazing,” Sophie breathed. “Is this why gnomes can grow plants that no one else can?” “Our songs are part of it, yes. But it is mostly our listening. Plants

always tell you what they need. They do not put on brave faces, or make pretenses. That’s why this plague has been so baffling. The trees at Wildwood have said nothing, and their silence forced the Colony to flee.” “Are the trees infected too?” Sophie asked. “Anything that harms us also harms the forest. Listening is how we maintain our health. Nature tells us what we need, and we obey—and give.” She pressed her palm against another tree and started singing again, this time a song about gentle rain. It should’ve been calming—Sophie even could’ve sworn she felt the drops on her skin—but she was too distracted by her new worry. “If the trees in Wildwood are silent, does that mean the plague has no cure?” “That is what many fear,” Calla whispered.

Deleted Scene from NEVERSEEN with Calla.