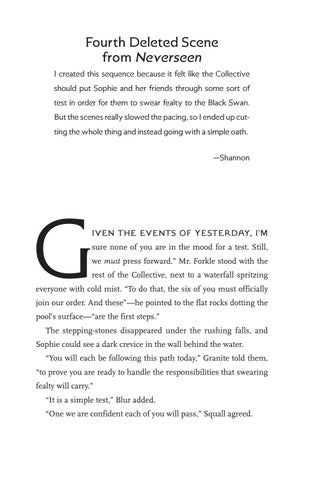 Fourth Deleted Scene from Neverseen should put Sophie and her friends through some sort of test in order for them to swear fealty to the Black Swan. But the scenes really slowed the pacing, so I ended up cutting the whole thing and instead going with a simple oath. —Shannon

IVEN THE EVENTS OF YESTERDAY, I’M

sure none of you are in the mood for a test. Still, we must press forward.” Mr. Forkle stood with the rest of the Collective, next to a waterfall spritzing

everyone with cold mist. “To do that, the six of you must officially join our order. And these”—he pointed to the flat rocks dotting the pool’s surface—“are the first steps.” The stepping-stones disappeared under the rushing falls, and Sophie could see a dark crevice in the wall behind the water. “You will each be following this path today,” Granite told them, “to prove you are ready to handle the responsibilities that swearing fealty will carry.” “It is a simple test,” Blur added. “One we are confident each of you will pass,” Squall agreed.

“And we will be waiting on the other side,” Wraith finished, “where you will make your oath.” “Any questions?” Mr. Forkle asked. “Yeah, I’ve got one!” Keefe stepped forward, holding out his arms. “What is up with these outfits?” Sophie had been wondering the same thing. She’d thought nothing could be worse than the Muppet-skin pajamas. But the white, feathered capes were ugly and itchy—and all they’d been given to wear underneath were swimsuits. “Aren’t we the Black Swan?” Keefe asked. “Or are we having an identity crisis?” Sophie smiled, relieved to hear him sounding more like his normal self. He definitely looked tired, but when she’d woken up that morning, he’d still been asleep at his window—just like her. Her neck ached from leaning against the glass, but she’d managed to sleep too—without even needing Silveny. “The outfit is a metaphor for your transformation,” Granite explained. “To mark how we all begin on the side of conventional tradition.” “But we have chosen to set tradition aside,” Wraith added, his floating black cloak rippling in the mist. “And now you will do the same.” “Who would like to go first?” Squall asked. Sophie stepped forward. “Actually, we’d prefer you go last,” Granite told her. “Your friends must prove themselves without your assistance.” “Then I’ll go first,” Keefe said. Mr. Forkle nodded. “Shed your cloak and leave it with me. You must press forward with no protection.”

“Whatever, dude.” Keefe shrugged off his cape, looking like a surfer in his white swimming trunks. He nearly lost his balance on the first step—the stones must’ve been slippery—but he crossed the rest without a problem and made it to the waterfall. “You’ll know the test when you see it,” Blur told him. Keefe nodded, squinting at the water for several beats before he called out, “Here goes nothing!” and dived through the streaming water. “Who’s next?” Mr. Forkle asked. Fitz took off his cape, proving that he had definitely been working out—though Sophie pretended not to notice. And of course his feet didn’t slip as he crossed the stepping-stones. He also didn’t hesitate at all before calling out, “See you on the other side!” and jumping through the wall of water. Biana followed—and she didn’t even complain about ruining her hair or makeup, which might’ve been the biggest sign of dedication any of her friends had shown. Della handed over her cape and strode to the stones looking like an Olympic diver. “Ms. Vack—er, Della,” Mr. Forkle said, waiting for her to turn to him. “You must allow the water to touch you during this test.” “Not a problem.” Della’s whole body shimmered, like she’d lowered some invisible barrier. Then she parted the falls with her hands before letting the water crash down around her. “Your turn, Mr. Dizznee,” Granite announced. Dex nodded. But he didn’t step forward. He seemed to be pulling his cape tighter around himself.

“You have no reason to feel self-conscious,” Granite told him. “Another year, and you’ll be just as tall as the other boys.” “Great,” Dex muttered, his face spaghetti sauce–red. Sophie looked away to give him his privacy. “See you soon,” he called a few seconds later, followed by a loud splash. “And now, Miss Foster,” Squall called. “The reason we asked you to wait,” Mr. Forkle said, “is because we’ve decided that you do not have to swear fealty.” “You are our heir,” Granite added. “Entrance to the order is your right.” “That’s not to imply that you have no choice in the matter,” Wraith added quickly. “You can still choose to walk away if you’d like,” Blur finished. Sophie wasn’t going anywhere. But she didn’t want special treatment, either. “If you don’t mind,” she said, “I’d like to take the test with my friends.” All five members of the Collective nodded, as if those were the words they’d hoped to hear. Sophie handed over her cloak and crossed to the first steppingstone—which was even slicker than she’d prepared for, and almost sent her crashing face-first into the water. Somehow she used the momentum to propel her forward instead and toppled through the icy waterfall, letting the water drag her down, down, down. The cold felt like knives, and the darkness was disorienting—the only guide, a glint of silver light far, far below.

Sophie plunged after it, swimming all the way to the bottom, where she found a moon jar and dug it out of the soft sand. She used the dim glow to search for a clue, but all she could see was an endless wall of rocks. Her lungs screamed for air, but she had a feeling if she surfaced to take a breath, it would count as a failure. The Black Swan never went backward. They also never took the safe path. If they couldn’t find a way around a wall, they . . . Inspiration struck. Sophie hoped she wasn’t crazy as she swam straight for the rocks. She closed her eyes and kept one arm over her head, hoping to cushion the blow if she was wrong. But the rocks were an illusion. After a few seconds the water turned warmer—brighter—and finally there was air. She gasped for breath and floated along the surface. “Took you long enough,” Keefe told her when she drifted onto a beach with shimmering purple sand. “Where are we?” Sophie asked, frowning at the jagged mirrors lining the rocky walls of the cavern. More than a dozen Sophies stared back at her, looking very “drowned rat.” Her bathing suit had also turned from white to black. “Here,” Fitz said, handing her a black towel to dry off. “You also earned yourself one of these in your moon jar.” He pointed to the black chain strung around his neck with a monocle decorated with the sign of the swan. “Think these will help us find the way out of here?” Dex asked,

holding up his monocle as he scanned the rocky walls. “I don’t see a door. Do you?” “All I can find are these mirrors.” Fitz frowned at his reflection. “Does anyone else think I look weird?” “Always,” Dex mumbled. Fitz laughed. “Guess I walked right into that. But seriously, look at my reflection.” Everyone gathered around him. “It’s the shadows,” Della decided. “See the way they’re settling into your features? It’s way worse for me, though. I look like I haven’t slept in a century.” She pinched her cheeks, and Sophie had to admit, Della’s reflection looked rather haggard. “Think that means anything?” Fitz asked. “Maybe.” Della backed away from the mirror and turned to a different one. “Huh, I don’t look as bad over here.” “Maybe it’s like the Hall of Illumination,” Sophie suggested. “And each of the mirrors means something.” The Silver Tower at Foxfire had a room lined with mirrors, and one of the requirements for graduation was to determine the meaning behind each one. “I think we’re supposed to smash them!” Keefe said, raising his fist. Sophie grabbed his elbow to stop him. “The first test was about pushing through barriers. I doubt they’d test us the same way again.” “So what do you think this one’s about?” Fitz asked. “Seeing ourselves clearly?”

“I hope not,” Biana mumbled. “I look hideous.” Biana’s reflection wasn’t flattering. She looked pale and scrawny and frumpy. And yet, Sophie’s reflection in the same mirror didn’t look that bad. “Wait a second,” she said, rushing from mirror to mirror. By the fifth try she called everyone over. She pointed to her shadowed reflection. “I look terrible, don’t I?” “Not possible,” Dex told her. “I dunno,” Keefe said. “I mean, we all know I’m a fan of the Foster. But I have to say, this isn’t you at your best.” “Right,” Sophie said. “Just like Della and Biana looked their worst in those other mirrors. I bet if you look around, you’ll each find a mirror that makes you look worse than the others do.” Fitz, Dex, and Keefe wandered until they found their worst mirrors. Fitz looked sallow and sickly, Dex looked scrawny and pale, and Keefe had a whole Joker-from-Batman thing going on. “Wow,” Keefe said, rubbing at the shadows that made his lips extra creepy. “Is it weird that I think I still look awesome?” “Yes,” Sophie told him. “So now what?” Biana asked. “I don’t know,” Sophie admitted. She’d hoped a door would open once they were all in the right place, but clearly they were still missing something. She tried whispering the Black Swan’s code phrases, like “swan song” and “Follow the pretty bird across the sky.” Nothing happened. “Any ideas?” she asked.

“Let’s smash them!” Keefe suggested again. “Maybe they want us to see ourselves at our worst,” Fitz jumped in. “Like facing our fears or something.” “And how does that help us get out of here?” Dex asked. “I’m with Keefe. I say we break them.” “No, I think Fitz is onto something there,” Sophie said. “I think this test is about admitting our weaknesses, and rising above them.” “So what do we do, then?” Biana asked. Sophie traced her fingers over the cool glass. There had to be something she was missing. But everything felt smooth and pristine. “I found it!” Dex shouted. “There’s a DNA sensor on the side, super well hidden. I bet we just have to lick it.” “Ugh.” No matter how long Sophie stayed in the Lost Cities, she would never stop feeling squidgy about licking random sensors. Dex didn’t share her reservations. He took a quick lick. “Ewwwwww, it tastes like—” The ground under his feet dropped away, sending him screaming down a narrow tunnel. “We’re going to assume that’s supposed to happen, right?” Keefe asked. Sophie nodded blankly, forcing herself to add, “Let’s all go on three.” No one looked excited—but they all licked the sensors at the same time, gagging as five trapdoors opened underneath them. Sophie’s stomach crashed against her throat—but before she could scream, her feet hit some sort of trampoline at the bottom and launched her back up.

She assumed she’d end up back in the mirror cave, but somehow she landed in the clearing with the waterfall. Her feet planted on the grass in a perfect-ten landing the same second as the rest of her friends. “Congratulations,” Granite said as the rest of the Collective applauded. Mr. Forkle handed them each a cape, properly black and feathery this time—though it reminded Sophie more of the Neverseen’s cloaks than she wanted it to.

Deleted Scene from NEVERSEEN with Sophie and the Collective.