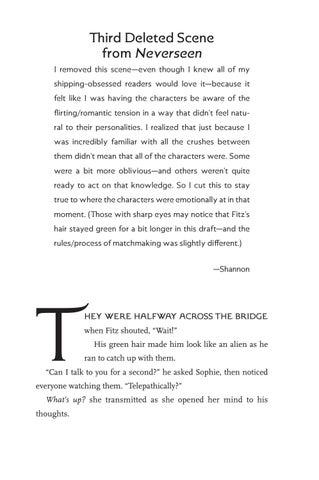 from Neverseen I removed this scene—even though I knew all of my shipping-obsessed readers would love it—because it felt like I was having the characters be aware of the ral to their personalities. I realized that just because I was incredibly familiar with all the crushes between them didn’t mean that all of the characters were. Some ready to act on that knowledge. So I cut this to stay true to where the characters were emotionally at in that hair stayed green for a bit longer in this draft—and the

HEY WERE HALFWAY ACROSS THE BRIDGE when Fitz shouted, “Wait!” His green hair made him look like an alien as he ran to catch up with them. “Can I talk to you for a second?” he asked Sophie, then noticed everyone watching them. “Telepathically?” What’s up? she transmitted as she opened her mind to his thoughts.

I just wanted to say that if you can’t sleep tonight—or if you wake up with nightmares or something—call for me. I’ve heard your transmissions from halfway around the world. I should be able to pick them up from across the river. But what if I wake you? Who cares? “Are you guys done flirting over there?” Keefe shouted. “Is this how it’s going to be now that you’re Fitzphie?” “Stop calling us that!” Sophie shouted back. “That’s right,” Fitz agreed. “We’re Sophitz!” He grinned at her as her brows shot up. And then . . . he hugged her. It wasn’t a tight hug or anything. In fact, there was probably enough space to fit another person between them. But still—FITZ WAS HUGGING HER. Figured this ought to shut Keefe up, he transmitted, killing the moment. “Call me if you need me,” he said out loud. Sophie turned and walked away, keeping her eyes on her feet as she crossed the rest of the bridge and ducked inside. Della was kind enough to head straight for her room. Unfortunately, Biana didn’t let her off the hook so easy. “So, what was that about?” she asked. Sophie went for distraction. “I’m just worried about my family.” “I know,” Biana said quietly. “I’m sorry. I hope they’re okay.” “Me too.” Sophie was almost to her room when Biana added, “But that’s not what I mean, and you know it. Are you and Fitz . . . ?”

Sophie waited. If Biana wasn’t going to say it, she certainly wasn’t. Biana narrowed her eyes. “You’re going to make me bring up the hug?” Sophie cringed. This was dangerous territory. Biana had almost not become her friend because she thought Sophie was using her to get to her brother. And Sophie would never do that—but she also wouldn’t have minded if Fitz noticed her on his own. Biana didn’t need to know that. Especially since the truth was so much less exciting. “Fitz was just trying to annoy Keefe,” Sophie mumbled, attempting not to let her disappointment leak into her voice. And maybe it worked, because all Biana said was “Hmm.” Then again, when Sophie turned to leave, Biana called after her. “You know I don’t care, right? If you and my brother . . . I mean, it’d be weird, but . . .” “We’re friends,” Sophie insisted. “I know. But just in case . . .” “Um. Okay.” Sophie wondered if it were possible to have a more awkward conversation. Apparently, it was, because Biana had to go and ask, “What about Dex? And Keefe?” Now those were dangerous questions. Well, not the Dex part—but Keefe? “They’re also my friends.”

Biana arched one brow, clearly not convinced. “Aren’t we all supposed to be waiting to be matched or something?” Sophie asked, trying to steer away from the trickier subjects. Not that being “matched” was any less weird. It was one of the strangest parts about being an elf. The elves had a complicated matchmaking system, and not following it had huge consequences. They claimed it was to ensure proper genetic diversity in their offspring, but the whole thing felt super unfair, and like a disaster waiting to happen. “I guess that’s true,” Biana agreed, looking somewhat mollified. “Can you believe we’ll have to register next year? Well, assuming we’re not still on the run.” “Next year?” Sophie asked. “Yeah. We register when we enter Level Four at Foxfire. I mean, we don’t get our matches right then or anything. That’s not until we finish Level Six. But we register early so the matchmakers have time to prepare our lists.” “That’s . . . really soon.” “I know.” Biana didn’t seem nearly as freaked out by this information. She even laughed at Sophie’s stunned expression. “Good night, Sophie.” “Night,” Sophie mumbled, stumbling blankly back to her room.

Deleted Scene from NEVERSEEN with Fitz and Sophie.