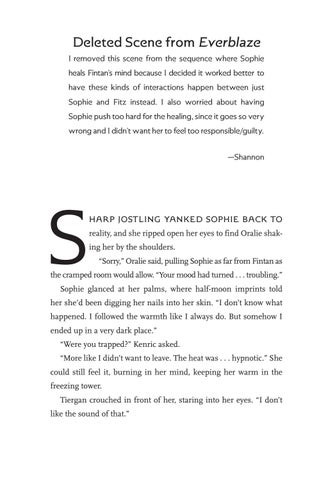 Deleted Scene from Everblaze heals Fintan’s mind because I decided it worked better to have these kinds of interactions happen between just Sophie and Fitz instead. I also worried about having Sophie push too hard for the healing, since it goes so very wrong and I didn’t want her to feel too responsible/guilty. —Shannon

HARP JOSTLING YANKED SOPHIE BACK TO reality, and she ripped open her eyes to find Oralie shaking her by the shoulders. “Sorry,” Oralie said, pulling Sophie as far from Fintan as

the cramped room would allow. “Your mood had turned . . . troubling.” Sophie glanced at her palms, where half-moon imprints told

her she’d been digging her nails into her skin. “I don’t know what happened. I followed the warmth like I always do. But somehow I ended up in a very dark place.” “Were you trapped?” Kenric asked. “More like I didn’t want to leave. The heat was . . . hypnotic.” She could still feel it, burning in her mind, keeping her warm in the freezing tower. Tiergan crouched in front of her, staring into her eyes. “I don’t like the sound of that.”

“Me neither,” Alden admitted. “Is it something I could help with?” Fitz asked. “I think it’s best not to risk allowing Fintan to influence a second Telepath,” Oralie said quietly. “But I’m still the guide,” Fitz reminded everyone. “You are,” Oralie agreed. “But I think it’s better if I continue being the one to monitor—assuming we continue at all.” Silence followed as the Councillors all exchanged looks. Eventually, Councillor Terik moved to Sophie’s side. “Can you heal Fintan?” “I . . . think so,” Sophie hedged, not wanting to lie—but not wanting to make anyone doubt her either. “It seems like some of his consciousness is still there, so I should be able to. But his mind is different than anything I’ve ever seen, so it’s hard to say for sure.” “Then perhaps we should stop now,” Alden said quietly. “I don’t think you realize how long Oralie had to shake you before you came back, Sophie. I was seconds away from coming after you.” “But I know what to expect now,” Sophie countered, not wanting to lose this chance to find the rebels—and maybe Jolie’s killer. Surprisingly, no one argued. They didn’t look happy, either—and she heard several sighs and mumbles as she scooted back to Fintan’s side. But they didn’t try to stop her as she took Fitz’s icy hand. “I’ll let you know if I need you,” she promised. “No—you’ll let me know when it’s safe for me to join you, whether you think you need me or not,” he corrected.

Sophie smiled. “Fine.” She gave herself three slow, deep breaths to steady her nerves. Then she reached for Fintan’s temples and shoved her way back into his mind.