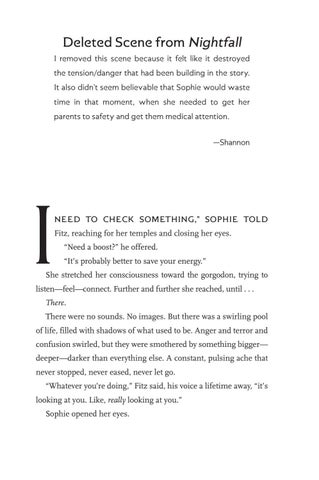 Deleted Scene from Nightfall I removed this scene because it felt like it destroyed the tension/danger that had been building in the story. It also didn’t seem believable that Sophie would waste time in that moment, when she needed to get her parents to safety and get them medical attention. —Shannon

NEED TO CHECK SOMETHING,” SOPHIE TOLD

Fitz, reaching for her temples and closing her eyes. “Need a boost?” he offered. “It’s probably better to save your energy.”

She stretched her consciousness toward the gorgodon, trying to

listen—feel—connect. Further and further she reached, until . . . There. There were no sounds. No images. But there was a swirling pool of life, filled with shadows of what used to be. Anger and terror and confusion swirled, but they were smothered by something bigger— deeper—darker than everything else. A constant, pulsing ache that never stopped, never eased, never let go. “Whatever you’re doing,” Fitz said, his voice a lifetime away, “it’s looking at you. Like, really looking at you.” Sophie opened her eyes.

All she could see was yellow—her world narrowed to the gorgodon’s relentless gaze. And as she stared into those slitted pupils, the ache pulsed harder, reaching out like clawed hands as those shadowed memories curled into shapes—nightmares— “She saw the other gorgodons get slaughtered,” Sophie whispered, feeling tears stream down her cheeks. “And she’s been down here ever since, all alone—no light, no food, only the command to guard my parents. . . .” Sophie clutched her chest, the ache too raw for words. I’m sorry, she transmitted, even though the heartbroken creature wouldn’t understand the words. She shared her own sorrow, her own grief, let the gorgodon feel that hole that still lived deep inside her after so long worrying about her parents—the same people the creature was trying to protect. The gorgodon landed right in front of her, its eyes never leaving hers, and a different thread of emotion wrapped around her heart. There was no word for the feeling—no comparison that quite fit it. But it felt like a truce. “So, I know you’re having a moment here, Foster,” Keefe said, his hand squeezing her shoulder. “But Dex got the door open, and we’ve got your parents. We need to go.” The words were so huge and hopeful, they should’ve knocked Sophie over. But her mind was split—part of her still connected to the creature, lost in those shadowy depths. If you let us go, we’ll come back, she transmitted. We’ll take care of you. She poured out any images she could think of to help explain

the words—memories of Silveny and Greyfell, and Verdi, and Iggy, and the hundreds of other creatures in the Havenfield pastures. And she sent that strange emotion back, the one that felt like a truce. And the gorgodon sent it back again. “Okay,” Sophie said, struggling to her feet even as she held that yellow-eyed gaze. “We’re going now. But we’ll be back.” “Uh, we will?” Fitz asked. Keefe snickered. “Looks like Foster just adopted a new pet.”