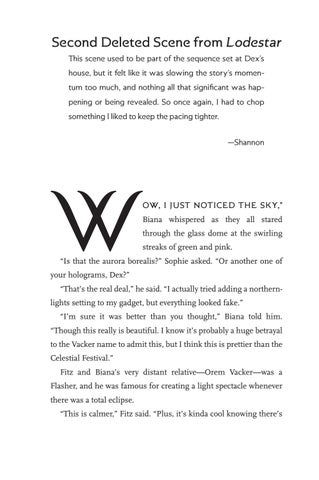 Second Deleted Scene from Lodestar house, but it felt like it was slowing the story’s momenpening or being revealed. So once again, I had to chop something I liked to keep the pacing tighter. —Shannon

OW, I JUST NOTICED THE SKY,” Biana whispered as they all stared through the glass dome at the swirling streaks of green and pink.

“Is that the aurora borealis?” Sophie asked. “Or another one of

“That’s the real deal,” he said. “I actually tried adding a northernlights setting to my gadget, but everything looked fake.” “I’m sure it was better than you thought,” Biana told him. “Though this really is beautiful. I know it’s probably a huge betrayal to the Vacker name to admit this, but I think this is prettier than the Celestial Festival.” Fitz and Biana’s very distant relative—Orem Vacker—was a Flasher, and he was famous for creating a light spectacle whenever there was a total eclipse. “This is calmer,” Fitz said. “Plus, it’s kinda cool knowing there’s

no one controlling it. It’s just . . . nature. Feels like a good thing to remember, you know? As powerful as we are, as many crazy things as we can do, there’s so much that’s way bigger than us.” Biana laughed. “Look who’s getting all deep and philosophical while cuddling with his sparkly red dragon.” “Hey, don’t knock it till you try it,” Fitz told her, hugging Mr. Snuggles tighter. “Besides, I think it’s useful to remember that we’re not as important as we sometimes think we are. It’s . . . Never mind, I don’t know how to explain it.” “I do,” Sophie jumped in. “It’s good to remember that we’re not the epitome of everything, because it puts it all in perspective. Especially with how huge our problems feel sometimes.” “Exactly,” Fitz said. “Maybe the whole world isn’t resting on our shoulders. Only a part of it is. Sometimes I think we forget that. Like with the alicorns. All that stress and hassle we went through trying to shelter them in the Sanctuary, when the better idea was to let Silveny and Greyfell take care of themselves.” “So . . . what? We just let the Neverseen do whatever they want?” Dex asked. “Of course not,” Fitz said. “But sometimes I wonder if the Council’s problem is that they keep trying to control everything. Their attention gets so divided that they miss a bunch of huge stuff.” “Like when they focused on finding the Black Swan instead of going after the Neverseen,” Sophie suggested. “Or all the focus on abilities, and forgetting to train us in our skills,” Fitz added.

Biana snickered. “Look—now they’re basically finishing each other’s sentences. They really are Fitzphie, aren’t they?” she asked Dex. “It’s Sophitz,” Fitz corrected. “And hey, you guys are starting to turn into . . . Actually, what would we call you? Bianex? Dexiana?” “How about Vackizznee?” Biana suggested. “Or Dizzker?” “Dizzker?” Sophie repeated. “It could work,” Biana insisted.