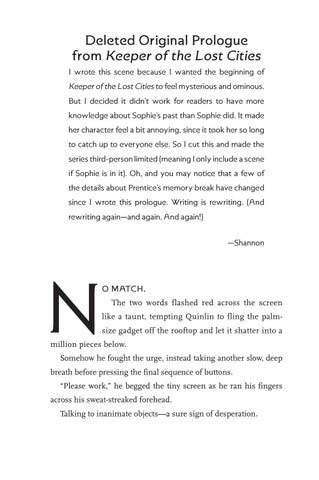 Keeper of the Lost Cities to feel mysterious and ominous. But I decided it didn’t work for readers to have more knowledge about Sophie’s past than Sophie did. It made her character feel a bit annoying, since it took her so long to catch up to everyone else. So I cut this and made the series third-person limited (meaning I only include a scene if Sophie is in it). Oh, and you may notice that a few of the details about Prentice’s memory break have changed since I wrote this prologue. Writing is rewriting. (And rewriting again—and again. And again!) —Shannon

O MATCH . The two words flashed red across the screen

like a taunt, tempting Quinlin to fling the palmsize gadget off the rooftop and let it shatter into a

million pieces below. Somehow he fought the urge, instead taking another slow, deep

breath before pressing the final sequence of buttons. “Please work,” he begged the tiny screen as he ran his fingers across his sweat-streaked forehead. Talking to inanimate objects—a sure sign of desperation.

A second later the screen flashed with the words

Quinlin clenched the blinking square in his fist, like that would somehow make it cooperate. When it didn’t help, he switched it off and shoved the gadget deep into the pocket of his cape and glanced up at the sky. Time to deliver the bad news. The night was just starting to fade into the deep blue glow of early dawn, and one by one the stars were winking away. Alden would be there any minute. But as the seconds dragged by, Quinlin could only pace the length of the rooftop and wait. Back and forth. Back and forth. A flash of light stopped him in his tracks, and a tall figure in a dark gray cape shimmered onto the rooftop next to him. “I came as soon as I could,” Alden apologized as he smoothed his dark wavy hair. His vibrant teal eyes shone even in the dim light. “What did you find?” Quinlin tried to force out the words. When they wouldn’t come, he reached into his pocket and retrieved the gadget, holding it out to Alden. “See for yourself.” Alden tapped the screen, and a hologram appeared—the twisted double helix of a DNA strand glowing in the darkness. “Well . . . this is a surprise,” Alden whispered. A shadow of concern was painted across his handsome face. “Have you shown this to anyone?” “Only you.” “Good. Let’s keep it that way.”

Quinlin nodded. “You couldn’t get anything else?” Alden asked, still studying the hologram. “I tried,” Quinlin assured him. “But Prentice’s mind was particularly strong. I had to shatter his sanity in order to extract the one piece I recovered.” Alden nodded gravely. “Such a waste.” He held the hologram closer to his face, his eyes narrowing. “I’m no expert on these, but this one looks strange, doesn’t it?” “It’s been altered somehow,” Quinlin agreed. “The system couldn’t even process it.” Frustration dripped off every word. Alden took a turn at pacing. “I assume there was no match. . . .” Quinlin laughed darkly. “I ran it five times.” Alden ran it a sixth to be sure. “Well . . . at least we know it’s a girl.” They both fell silent, lost in their own thoughts. “What do you think it means?” Quinlin finally whispered into the darkness. “I have no idea,” Alden admitted. He touched the center of the screen, and the hologram disappeared. “But I need to find her.” “You really think you can?” Quinlin asked. “Where will you look?” “I’m not entirely sure. Though . . . I suppose if I wanted to hide a child, there’s one place I would be fairly certain no one would search.” Quinlin sucked in a breath. “You don’t mean . . .” Alden nodded. “It seems like the best place to start.” “But . . . there are so many of them—and she could be anywhere.” “It won’t be easy,” Alden agreed. “I’ll probably have to wait

until her abilities develop before I can truly identify her.” “That will take years,” Quinlin warned. “I know. We’ll all have to be patient.” Quinlin looked away. “The poor child . . .” A rueful smile spread across Alden’s lips. “Oh, they’re not all bad.” “Still. To be raised by humans.” Quinlin cringed just saying the word. Alden’s teal eyes twinkled mysteriously as he pulled a pathfinder from his pocket and held the crystal out into the first rays of dawn. A single beam of light was refracted toward the ground. “Who knows? Maybe it will be good for her,” he said, mostly to himself, before glancing at Quinlin. “I’ll let you know when I find her.” “Don’t you mean if you find her?” Quinlin couldn’t help asking. Alden shook his head. “Oh, I will find her. I just don’t know what we’ll do with her once I do.” He gave a half bow and stepped into the beam of light from his wand. His body glittered for a second and then vanished.

Deleted Original Prologue from Keeper of the Lost Cities