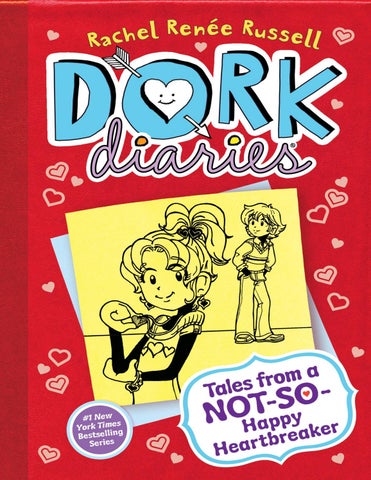 To my aunt Betty and uncle Phil. Thank you for always being there for me and for treating me like your pretend daughter. I love you both dearly!

ACKNOWLEDGMENTS Wow! Itâ&#x20AC;&#x2122;s hard to believe we now have a Dork Diaries Book 6! I would like to thank the following members of Team Dork: My DORKALICIOUS fans all over the world! Each and every one of you is very special to me! Daniel Lazar, my dream agent (thank you for supporting my sometimes wacky ideas); Liesa Abrams Mignogna (a.k.a. Batgirl!), my fabulous and fun editor (who almost makes this NOT seem like work); Jeanine Henderson, my super-fast-and-talented art director (who survived this book); Torie, my very organized pen pal; and Deena Warner, my website magician. Mara Anastas, Carolyn Swerdloff, Matt Pantoliano, Katherine Devendorf, Paul Crichton, Fiona Simpson, Lydia Finn, Alyson Heller, Lauren Forte, Karin Paprocki, Lucille Rettino, Mary Marotta and the entire sales team,

and everyone else at Aladdin/Simon & Schuster. Iâ&#x20AC;&#x2122;m so lucky YOU chose ME! Maja Nikolic, Cecilia de la Campa, and Angharad Kowal, my foreign rights agents at Writers House for steadily recruiting new Dorks, one country at a time. And last but not least, my entire ADORKABLE family! Thank you for being the inspiration for this series. Always remember to let your inner DORK shine through!

SATURDAY, FEBRUARY 1 OMG! I’m suffering from the worst case of CRUSHITIS ever! This morning I had these fluttery butterflies in my stomach that were making me feel SUPERnauseous ! But in a really GOOD way ! I felt SO insanely happy I could just . . . VOMIT sunshine, rainbows, confetti, glitter, and . . . um . . . those yummy little Skittles candy thingies! I still can’t believe my crush, Brandon, actually texted me last night after I left his birthday party. And you’ll NEVER guess what happened??!!

HE ASKED ME OUT TO CRAZY BURGER!! SQUEEE

Hey! I was beyond FIERCE! I was an air-guitar-playing, dancing machine!

After dancing in my room for an entire hour, I was so tired I could barely breathe.

Thatâ&#x20AC;&#x2122;s when I collapsed into a wheezing, sweat-soaked mass of body odor and sheer exhaustion.

ME, WITH A BIG FAT DORKY SMILE PLASTERED ACROSS MY FACE!! WHY? Because any minute now, Brandon was going to contact me so we could make plans to hang out at Crazy Burger.

SQUEEEEEE ! So I snuggled into a comfy chair, stared at my cell phone, and waited patiently for his call.

ME, FLOPPED ACROSS MY BED, SULKING But no call! No e-mail! Not even a text message! I even checked my cell phone to make sure the battery

thingy hadn’t run down or something. Unfortunately, my last call was from my BFFs, Chloe and Zoey. They had called me late last night with some REALLY juicy gossip. Apparently, someone had showed up at Brandon’s party unexpectedly to drop off a present for him shortly after I had left. You’ll NEVER guess who it was!

MACKENZIE !! Okay, I’ll admit it was really nice and sweet of her to do that. But she had totally overlooked one very important little detail . . . .

Which meant MISS THANG had basically CRASHED Brandon’s party! Like, WHO does that?! My BFFs told me that MacKenzie was twirling her hair, giggling, and flirting with Brandon like crazy. Then she got superserious and asked to talk to him PRIVATELY about something really important! JUST GREAT ! Now I’m really starting to worry PANIC! What if MacKenzie told him some awful lies about me so he wouldn’t want to be friends anymore?!! She was always talking about me behind my back and saying stuff like, “Nikki’s a hopelessly insecure, fashionchallenged, diary-obsessed DORK!” Which is so NOT true! Well . . . maybe it’s a little true. Okay! Actually, a LOT true. But STILL!!

WHY did all of this have to happen just when Brandon and I were about to have our very first date-that-reallyisnâ&#x20AC;&#x2122;t-a-date ?!

“I CAN’T BELIEVE THIS IS HAPPENING! I DROPPED MY PHONE AND NOW I CAN’T CALL NIKKI!”

In spite of the fact that I was still suffering from a severe case of crush-itis AND having a really BAD day, my parents MADE me babysit my little sister, Brianna. Just so they could go to a movie together! Like, how INSENSITIVE is that?! Sometimes I think Mom and Dad need to take a parenting class or something. The last time I tried to talk to Brandon on the phone with Brianna around, it was a total disaster. She actually told him about my hairy legs and crusty eye boogers. It was SO humiliating! Lately, Brianna has been totally obsessed with those diva hair salon shows on TV. And get this! She actually calls herself Miss Bri-Bri, Fashionista Hairstylist to the Stars! I was shocked to see her sneaking into my parentsâ&#x20AC;&#x2122; bathroom and stealing shampoo and perfume and stuff. It was like I had personally witnessed a MIRACLE!

Brianna was FINALLY trying to improve her very NASTY hygiene !

WOO-HOO! But later, when I peeked inside Brianna’s room, I discovered she was MISSING! And in her place was this strange little woman. She was wearing fake diamond cat-eye glasses, a long scarf, four-sizes-too-big satin slippers, and a kiddie paint apron filled with Mom’s designer makeup collection. I didn’t know WHO the heck she was. I wanted to scream, “Who are YOU? And what have you done with MY little sister?!” But my gut told me to run away FAST and call the POLICE!

Then she smiled at me really big and said . . .

“BONJOUR, MISS NIKKI! WELCOME TO SALON BRIANNA!!” I was halfway down the hall before Brianna caught up with me. She grabbed my arm and dragged me back toward her room. “Dah-ling! Where are you going?! Don’t be skurd!” Brianna said in an awful fake French accent that sounded more like a six-year-old Arnold Schwarzenegger. “You’re playing with Mom’s new makeup and perfume?! You DO realize she’s going to KILL you when she gets home! Right?!” I scolded her. “Never mind zat, dah-ling! You are Miss Bri-Bri’s next appointment! Wee! Wee! Come! Come!” she said, pushing me into her desk salon chair. Kidz Bop music was playing in the background. And she’d drawn the most hideous hairstyle posters and

hung them on her wall to help set the mood of a trendy, upscale salon. Those posters should’ve been a WARNING to me about Miss Bri-Bri’s hairstyling abilities. I couldn’t resist coming up with catchy names for each one . . . .

“Don’t worry, dah-ling,” Miss Bri-Bri said. “I’m going to make you BOOTY-FUL! For your little friend Brandon. Yes?!” For BRANDON?!!! I blushed profusely. Hey! It was JUST a pretend makeover with Miss BriBri, Fashionista Hairstylist to the Stars! What could possibly go WRONG? “Okay. As long as it’s ONLY pretend!” I grumped. If I was lucky, this would keep Brianna occupied until Mom and Dad got back home. And it was way LESS dangerous than us baking cookies and almost burning down the house. AGAIN! “YAAAY!!! My first customer!” Brianna Miss -Bri-Bri cheered. “Before I start, dah-ling, would you like something to drink? Juicy Juice? Hawaiian Punch? Chocolate milk?”

“Chocolate milk would be nice,” I answered. “Hans! Go get our customer, Miss Nikki, a glass of le chocolate milk! Extra cold!” she commanded, looking at the teddy bear in the chair next to mine. The bear . . . I mean . . . Hans . . . didn’t move an inch. “Well?!” She glared at him. “Don’t just sit there! Go get zee milk for her. Now! PLEASE!!” Then she turned to me and laughed uncomfortably. “Please excuse my assistant. Hans is new here. He speaks la French, but very little English.” I looked at the teddy bear, looked back at her, and raised an eyebrow. “Um . . . okay?” I replied. “I know just what to do with your hair, dah-ling!” Brianna said as she draped a bath towel smock around my shoulders. “Now, just relax and let Miss Bri-Bri

work her magic! Yes? Hans, would you please grab that magazine and give it to—Oh, never mind! I’ll do it myself!” Brianna handed me a trendy teen fashion magazine to read, just like in a real salon. I was impressed. Until I realized she had swiped MY new Teen Thing mag from my room. The little THIEF!! But I had to admit, Miss Bri-Bri, Fashionista Hairstylist to the Stars, seemed to know her stuff . . . .

ME, READING WHILE MISS BRI-BRI DOES MY HAIR

That’s when I came across this very intriguing article about—you guessed it—GUYS!!

That magazine article was just . . . SHOCKING! Only a guy who was a total LOSER would do those things. I felt really lucky I didn’t have to deal with “DDD” (Dysfunctional Dude Drama) in my OWN life. I ripped out the magazine page, folded it, and stuck it in my pocket. You know, for future reference. Just in case. Suddenly I felt a tug on my hair. Then a huge yank! “Ouch!” I yelped. “Brianna, WHAT are you doing?!” “Making you booty-ful, dah-ling! Zere eez no problem at all! No, no! Don’t worry, please!” In spite of her assurances, I sensed a little uncertainty in that jacked-up accent of hers.

Next I felt another slight tug and then . . . SNIP! A chopped-off braid landed in my lap! I gasped! Then, with a trembling hand, I picked up the braid and PRAYED that it belonged to someone else. Like maybe Hans, that lazy, French-speaking teddy bear assistant! “What is THIS?!” I yelled at Brianna as I stared at it in horror. “Nut-ting! Nut-ting at all. I throw away! Yes?” She snatched the braid from me and tossed it over her shoulder. “There! All gone!” “Brianna! Give me that mirror! Now! Or this game is SO over!” I screeched, my eyeballs bulging. Brianna handed it to me and giggled nervously.

BRIANNA HANDS ME THE MIRROR Well, I took one look in that mirror and . . .

HIDEOUS-A-LICIOUS! Which is, like, ten times worse than just plain ol’ HIDEOUS! I couldn’t believe the HOT MESS I saw in that mirror. I thought my eyes were going to rupture and bleed from being exposed to such awesomely wretched . . .

(THAT WAS ME SCREAMING!)

And the back was even worse! Just as I had suspected, a large chunk of hair was missing . . . .

I seriously considered crawling around on the floor until I found my severed braid.

Then Iâ&#x20AC;&#x2122;d place it in a bucket of ice and rush to the nearest emergency room to see if doctors could somehow surgically reattach it . . . .

“DOCTORS, PLEASE! YOU NEED TO DO EMERGENCY SURGERY TO REATTACH MY BRAID BEFORE MY, UM . . . HAIR-FOLLICLE THINGIES . . . DIE!” “My hair! My poor hair!” I sobbed. “Brianna, I’m so mad at you right now I could just . . . ARRRRRGGH!!” “Dah-ling! Please! Calm down! This is a no-tears salon! But tipping IS allowed!” Miss Bri-Bri grinned as she held out her hand. “Got any loose change?” She expected payment?!! I was beyond DISGUSTED! Sorry! But I’d had quite enough of Brianna and her: 1. phony-baloney French accent. 2. ugly haircuts. 3. lazy, no-good assistant, Hans!

“Hair styled by Miss Bri-Bri is always booty-ful! I take a PICTURE of your booty!” Brianna said as she grabbed my cell phone off of her dresser and set it to camera mode . . . . Love—and crushes—are in the air for Nikki Maxwell in this sixth book of the New York Times bestselling Dork Diaries series. It’s the bigges...

Love—and crushes—are in the air for Nikki Maxwell in this sixth book of the New York Times bestselling Dork Diaries series. It’s the bigges...